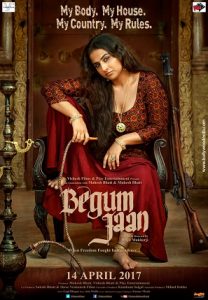 Indian cinema has had a long and enduring love affair with ladies of the night. Courtesans, with hearts of gold, have been the subject of dozens of films, but strangely, all of these films, with the possible exception of Shyam Benegal’s Mandi (1983), have been mediocre at best. Srijit Mukherji’s Hindi remake of his 2015 Bengali film Rajkahani, Begum Jaan is another addition to the long list of disappointing movies about strong, noble and beautiful cocottes.

Begum Jaan opens in 1947, when India is about to gain freedom and become two nations. The chairman of the Border Commission, Sir Cyril Radcliffe (Raja Biswas) divides the country into three parts — India, East Pakistan and West Pakistan — by drawing what came to be known as the Radcliffe Line. The line passes through a brothel run by the tough Begum Jaan (Vidya Balan), who considers the bordello to be her kingdom. Two government officials, Srivastava (Ashish Vidyarthi) from India and Ilyas (Rajat Kapur) from Pakistan, are tasked with managing the construction of the barbed wire fence between the two nations. They serve an eviction notice on Begum Jaan, only to find out that the well-connected madam enjoys the protection of the local Raja (Naseeruddin Shah) and is unwilling to move out. The two officers engage the services of hoodlum Kabir (Chunky Pandey) to get the sex workers to leave their home while Begum Jaan starts preparing for a battle to stay put, first with the help of the Raja and subsequently by transforming her team of women into a gun-toting army. The stage is set for a fight full of blood, gore and violence.

The premise of Begum Jaan is powerful. It holds the promise of something as monumental as Saadat Hasan Manto’s 1955 short story Toba Tek Singh. Sadly, the over-acted, over-directed, and over-written Begum Jaan never makes good on the promise and ends up as a loud, cacophonous and jarring film about a woman it insists on comparing with Rani Padmavati, Meera Bai and the Rani of Jhansi.

Begum Jaan fails on a number of counts.

One, the film lacks focus. It tries very earnestly to make intelligent observations about patriarchy, men, misogyny, and the two-nation theory but does not examine any of them in an in-depth meaningful manner. Two, it fails to flesh out the characters into real and believable people. There are some vague back stories and ambiguous flashbacks which fail to give any insight into the characters. Three, the dialogues of Begum Jaan are theatrical, and awkward. It appears that Mukherji has never spent time with people in Punjab, where the film is set. His idea of the language used in whorehouses is severely flawed. The obscenities hurled out by the women are nothing like the colourful cussing heard in red light districts of the region. Four, the dialects and accents used by assorted characters in the film are completely phony. Gujrati, Bengali, Rajhastani, Haryanvi, Hindi, Urdu and Punjabi — especially Punjabi — are butchered mercilessly as actors deliver their lines in a curious mix of accents. Five, everything in the film, from the performances to the screenplay to the cinematography and much else, is overdone. The director has no time for nuance, or introspection. Attempts to shock, horrify and move are made continually throughout the movie but none succeed. Six, the performances in the film are uneven and ineffective.

Naseeruddin Shah’s half-hearted portrayal of the Raja is truly disappointing. He fails to bring what could have been a very interesting character to life. The conversations between Ashish Vidyarthi and Rajat Kapur are totally vacuous. This is not how friends talk to each other. The conversations between the sex-workers, in the absence of proper characterisation and back stories, are utterly meaningless. The female actors rave and rant but don’t leave an impact. The performance of the exceptionally talented Vidya Balan in the film is difficult to assess because of the bombastic nature of the dialogue she is given, the lack of any meaningful development of character, and the implausible nature of her character’s actions. However, she is brilliant in two scenes, both with Naseeruddin Shah: one, when she asks for his help in resisting eviction and, two, when she is told by the Raja that he is no longer able to offer her protection. In the rest of the film, she fails to deliver. The one truly brilliant performance in Begum Jaan is that of Chunky Pandey as the murderous Kabir. He creates a villain that is evil and creepy, in an understated performance.

One undeniable strength of Begum Jaan is the excellent music by Anu Malik. The film uses the original version of Kundan Lal Saigal’s song ‘Baabul Mora Naihar Chooto Hi Jaye,’ composed by Raichand Boral for the 1937 film Street Singer, with great effect and reprises ‘Woh Subah Kabhi To Aayegi,’ a song from the 1958 film Phir Subah Hogi. ‘Holi Khelein,’ by Shreya Ghoshal and Anmol Malik, and ‘O Re Kaharo,’ by Altamash Faridi and Kalpana Patowary, are two immensely moving tracks, full of feeling and emotion. However, Sonu Nigam and Rahat Fateh Ali Khan fail to revive their lost glory with the song ‘Azaadiyaan,’ which appears out of place in an otherwise brilliant album. The finest song of the film is the enchanting ‘Prem Mein Tohre,’ sung individually by Asha Bhosle and Kavita Seth. Begum Jaan’s saving grace is, undoubtedly, its music, which make spending 119 minutes in the theatre worthwhile.