Shereenyar Yousufzai, a man of letters from Zarobi, a village at a distance of 19 kilometers from Mashal Khan’s village, Zaida, was the first to take a stand when clerics threatened to obstruct Mashal’s funeral prayers.

In the early 20th century, the village, along with the adjacent Zaida and Marghuz villages, became the centre of the Khudai Khidmatgars (KK), a reformist movement led by Khan Abdul Ghaffar Khan to promote education and shun violence among Pashtuns. An Azad School, part of the KK education agenda, was established in the village, and it is run by the Bacha Khan Trust Education Foundation (BKTEF).

How do you look at the brutal murder of Mashal Khan?

It was indeed very distressing. For me, another dispiriting factor was the venue of the crime, the act happened at Abdul Wali Khan University Mardan (AWKUM) — a place for reason, for dialogue, for discussing ideas — an institution which was named after our leader Khan Abdul Wali Khan. Unfortunately, the ideology that uses religion for political means has succeeded in pitting people against each other, on every front. The ideology of political Islam, championed by the Jamaat-e-Islami and their ilk, seems to have taken over educational institutions and academia.

How do you evaluate the stance of your own leadership in the aftermath of Mashal Khan’s murder?

The ANP follows the path of non-violence and has always stood against authoritarian regimes. It lays great emphasis on education and the university was established in its term in government. Our party has suffered the most at the hands of terrorism, and the ideology that justifies it.

When the incident happened, our central leadership was occupied with a protest outside the parliament building against blocking the computerised ID cards of Pashtuns. But I lay the blame on the ANP district Mardan leadership, district Nazim Mardan and the MNA from Mardan. I will put the blame on them, I will question their party affiliation, the ideology they have been following, and their sympathies with the killers. When Amir Haider Hoti, the provincial president, visited for Mashal’s condolences, I asked him about Himayatullah Mayar, the district Nazim, Mardan. The murder happened in his area, and he issued a statement on behalf of the party asking everyone not to comment on Mashal’s murder. His actions couldn’t be justified. I have heard that the party leadership has been questioning him and that Aimal Wali Khan has vowed not to spare anyone who was behind the murder.

But even Amir Haider Hoti abstained from commenting on Mashal Khan’s murder when asked by a TV channel.

It is a valid question. Amir Haider Hoti is also from Mardan, and we have to question him for his hesitation. But with the environment that has built up over the years, everyone tries to speak cautiously with regard to blasphemy allegations. Regarding the district leadership, the Nazim, Mayar, should have accompanied Mashal’s coffin to his village. If his own cousin, Ajmal Mayar, was involved, that was his personal issue, he should not have mixed it with the party position. The statement by the Nazim insisting on a neutral stance after the incident also needs to be investigated. Let me tell you that we have, in the party, criticised the leadership at every level, and have questioned them.

Let me add to this, I am an ordinary political worker, and I visited the university in Swabi to check the security arrangements. Political representatives in Mardan are liable for security arrangements at AWKUM, and the lapse that resulted in the brutal murder at the campus.

But most of the academic staff was hired during the ANP term. Hence, they must be ANP supporters and workers.

The problem in our political culture is that when a party comes to power, it is surrounded by opportunists who get their own people appointed through their power and influence. This has happened in the case of AWKUM, but not all of those hired during the ANP term were its workers. 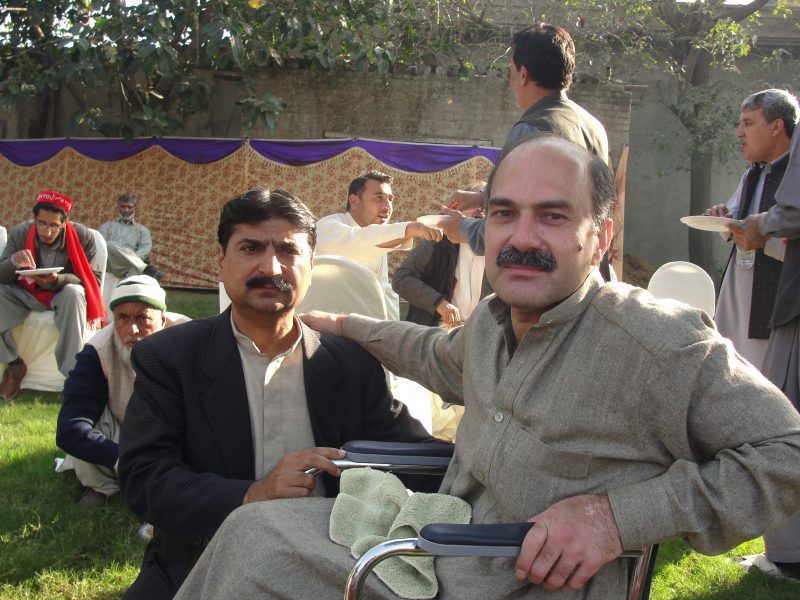 It is said that the Pakhtun Students Federation (PkSF) is the most active students’ organisation in the university campus, but they didn’t come forward to save Mashal’s life. It is also said that Mashal’s membership was suspended by the PkSF a week prior to his murder.

I have to reassert that the murder was planned and perpetrated by a few, in collusion with university officials. The name of a PTI councillor has emerged, and many others who incited the mob and people who were appointed in the university on political grounds, were co-conspirators in this murder.

With the debate on allegations of blasphemy, people were reminded of the statement made by Ghulam Ahmed Bilour, a party veteran, who, in 2012 announced head money for a filmmaker who made a blasphemous movie, and in 2015, for the owner of a French magazine. The ANP leadership didn’t question him, so did the party promote the narrative of violence on charges of blasphemy?

The statement by Bilour should have been questioned under the party principles. First, there is the ideology of non-violence, one who follows it cannot promote or condone violence. Second, our party has a clear stance that we should not interfere in matters of other countries.

Political forces, like my own party, in my opinion, had to work on two fronts. First, as a movement laced with these ideas; second, as a political party to participate in parliamentary politics. However, with the passage of time, the emphasis has been more on parliamentary politics, assigning tickets and making alliances. The other front, the movement, which guides the workers and imparts our political ideals was neglected. And that has resulted in what we are witnessing today.