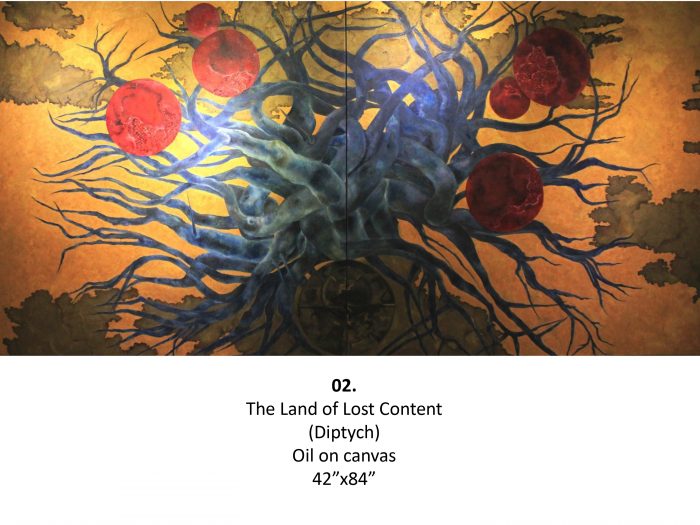 Laila Rahman’s abiding interest in myth is reflected in her recent show held at Chawkandi Gallery. Titled Blind Oblivion, this is her second solo at the gallery. In a series of seven works in oil, she makes a cosmogenic exploration into the origins of discord and dystopia.

Greek mythology ascribed the release of evil into the world to Pandora, who was the first mortal woman created by the gods. Laila Rahman’s exploration of primary causes is rather different from the ancient Greek narrative. She illustrates a world that has fallen from primal grace by the arrival of human beings. In this manner, she releases women from the burden of discord and implicates all of humanity instead. By this interpretation, she also endows the artist with the agency to create a counter-narrative to traditional origin myths. The artist is empowered with the reinvention of myth and authorship of metaphysical truths. 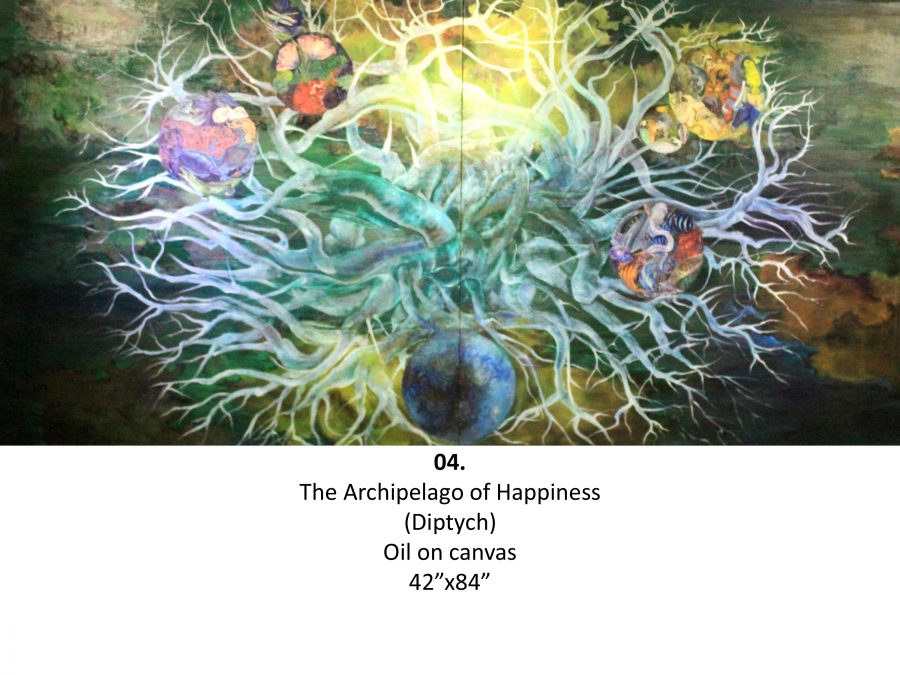 Rahman prefers to assemble the canvases into diptych and even quadriptych format with the edges set close to one another. The edges of the canvases are the only straight lines in this series in which strong preference is given to curved lines and organic shape and form.

In the large diptych titled ‘The Archipelago of Happiness,’ a mass of roots radiates from a central focal point. Six small spheres float within the mass, much like Christmas ornaments. Each sphere contains flowers or animals — worlds unto themselves without human presence. This work expresses Laila Rahman’s vision of a universe in harmony that pre-dates the creation of discord.

As a counterpoint to this work, Rahman has created ‘The Land of Lost Content.’ She acknowledges her debt to A. E. Housman’s eponymous poem. There are parallels between the two paintings, yet much has changed. The halcyon glowing palette of ‘The Archipelago of Happiness’ has shifted to a stronger palette of deep primary hues in ‘The Land of Lost Content.’ The root mass is dark blue and its gothic angularity conveys a sense of foreboding. The floating spheres are in the form of fruit, specifically pomegranates. 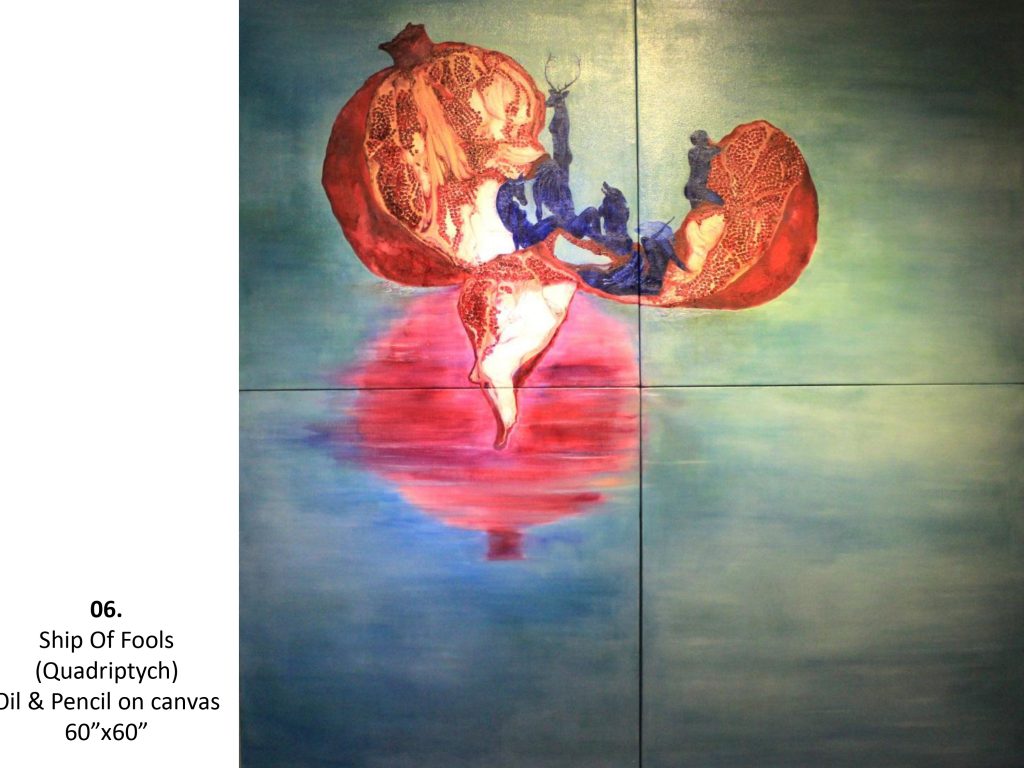 This work introduces the pomegranate in the form of a visual metaphor. It is an icon for the artist that represents, “A dystopic world where pomegranates are overripe, too red, almost diseased. They symbolise every type of corruption in the world.”

The pomegranate is an ancient symbol of fertility in many mythological traditions. It is associated with felicity rather than discord. By co-opting this time-honoured symbol into a very different narrative scheme, Rahman subverts received tradition. This challenges the viewer’s assumptions and creates a feeling of disorientation, which is particularly evident in the piece titled ‘Forsaken.’

The pomegranate is given shape-shifting qualities in ‘Forsaken.’ It grows carmine, seed-studded tentacles that entwine numerous life forms. The latter are sketched with pencil and left uncoloured. The contrast between the red tentacles and the pale background brings bleached coral reefs to mind that are dying because of pollution. 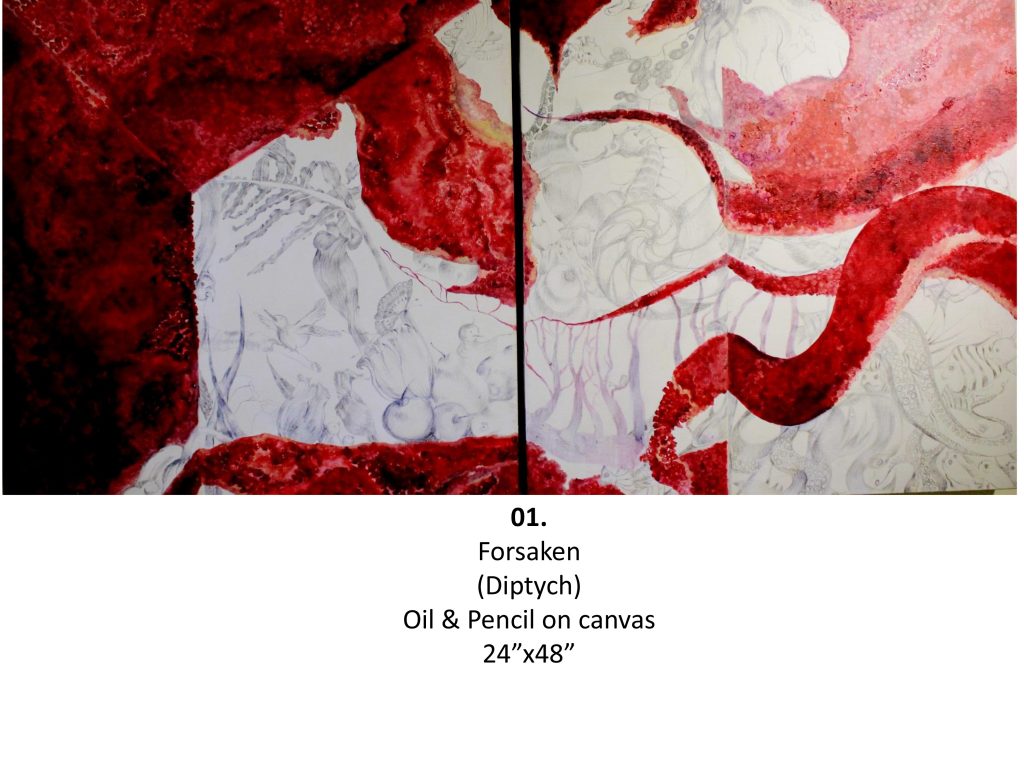 In the quadriptych titled ‘Ship of Fools,’ Laila Rahman borrows from Book 6 of Plato’s Republic, which offers an allegory of a dysfunctional crew on a ship. The painting is enigmatic. It shows a pomegranate split open against a background of sea and sky that merge seamlessly. ‘Seven figures,’ painted in monochromatic shades of ultramarine blue, perch on the uneven contours of the split fruit. They are human-like but transmogrified into hybrid, androgynous creatures, with heads of animals such as the unicorn, the lion and the antelope. The caption explains that these creatures represent virtues that are lost to society, such as innocence, courage and adaptability.

Rahman undoubtedly projects the presence of humanity as a sea-change element in the metaphysical cosmos — a change that is marked by the imagery of the pomegranate. This implies a strong causality of a before and an after in her narrative. However, this is contradicted by the work titled ‘Endless Night.’ Framed within a blue, scalloped border is a segmented nautilus shell. This is a metaphor for “the eternal cycle of evolution, growth and promise.” When Pandora released evils from the jar, one element remained inside and that was Hope. Similarly, this work hints at elements that reprieve discord and dystopia. 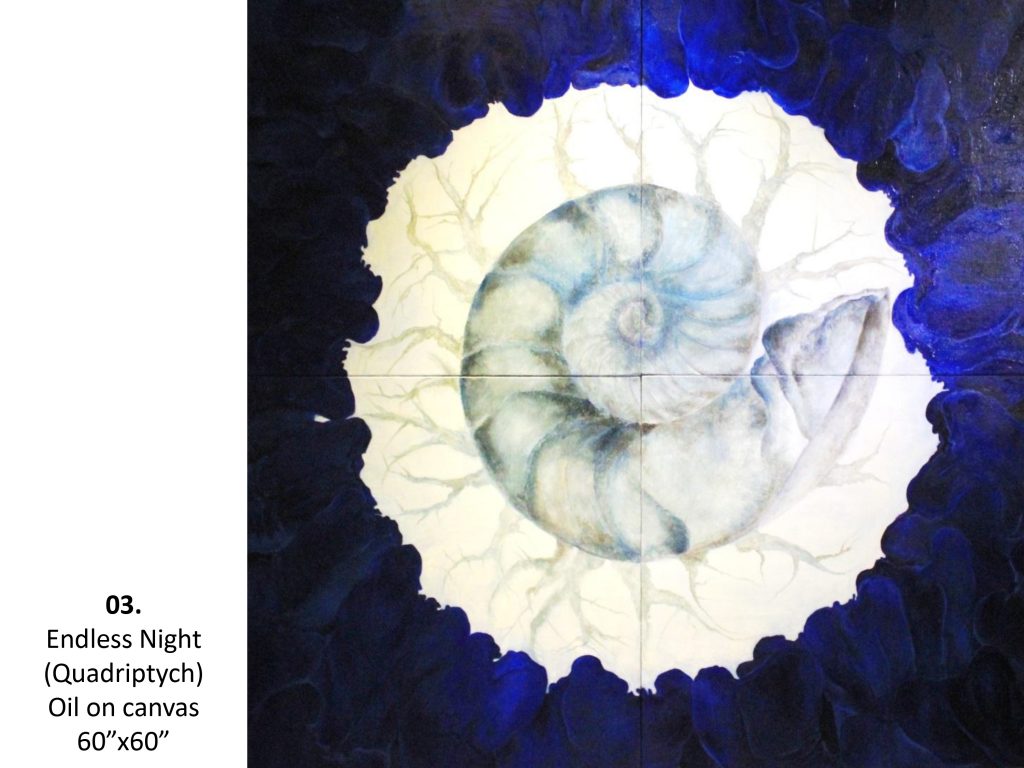 Laila Rahman’s induction of allegory into her visual expression is an invitation to “read” the work for coded meaning and sub-textual content. The ‘Blind Oblivion’ series is a good example of how visual language and textual language merge by means of artistic subversion. Rahman borrows from textual allegory and subordinates this borrowing to her own metaphysical gaze. The allegorical content of the original work is contained within a symbolic structure that initiates a new discourse that differs from the original allegorical reference.