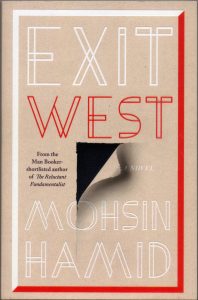 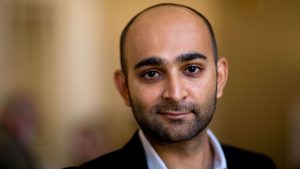 story about global migration and refugees. Yet those who believe that the ‘relevance’ of a novel is based on the ‘current issues’ it addresses, will be tempted to do just that. And in doing so, will miss the work’s more insightful and unique offerings. The aforementioned themes are deployed merely as a template through which the more subtle — and possibly fatal — entrapments of day-to-day existence are brought to the fore.

Nadia and Saeed are young residents of a familiar somewhere. Their city, under siege by militants, is on the brink of apocalypse. Against the backdrop of a ticking doomsday clock, the two take a liking to one another. They hang out, and when things become too dangerous, opt to move out of the country. They do so through a portal, one of many dark doorways known to transport people from one part of the globe to another.

This idea of a portal, a “blackness of a door” as an instant escape from crumbling societies is portrayed alongside the instant gratification provided by the internet and handheld devices, where all information is available to the younger generation at the tip of their fingers. Unlimited accessibility and interconnectivity with distant lands takes for granted the idea of moving from one place to another, as does immediate transportation through the black doors. As Nadia surfs the net, viewing photos and news updates from around the world, these places are instantly reachable to her. This reach is symbolised by the portals.

At the core of the story lies a constant yearning for ‘elsewhere,’ and the characters seem to be victims more of this restlessness of the human condition than any social or political upheaval. Nadia and Saeed first move to Mykonos, Greece, and then to London and then California. Every time the thrill of the move withers away and a sense of stagnation creeps in, they resort to the quick fix of moving. When their relationship appears to be unhinging, then too they decide that the solution is to move to another place. In fact it is the anticipation of the move itself that creates hope in their minds — the hope of a utopian elsewhere, where the grass is always greener, but which in reality does not exist, for wherever they go, they are confronted with similar problems. Yet the temptation to “start over, in a city far away,” persists.

This aspect may be based on Hamid’s personal experience, which a large section of Pakistani — or for that matter any — society, can relate to, who travel abroad for their education, or move with their families at a young age, and feel a constant sense of displacement. They too, are refugees. In the novel, long before the militants wreaked havoc on the city, Nadia had already moved out of her parents’ house. Thus, she is a refugee of her imagination, in her continuous search for something she is unable to specify.

Also at the core of the novel, is the smartphone, which is a cornerstone of sustenance and is as essential to basic survival as stocking up on rations, or finding shelter. There is constant mention of “backup batteries” — whether to supplement a power shortage or to carry out the ritual of charging one’s phone, which is given as much importance and emphasis as offering prayers. Once the concept of black doors as portals is established, we are also presented with a variation of this; the idea that windows too can be doors of sorts. The screen of the mobile phone too, falls into this category and is a window of opportunity.

The concept of nostalgia is romanticised at the surface, but rarely brings about any productive results for Nadia or Saeed. Yet it is difficult to determine whether Hamid is glorifying nostalgia or portraying it as yet another indulgence, or trap, like the mobile phone. The smartphone is also used as a reference point for existentialist questions raised by the characters, such as what death may feel like: “Do things just go black? Like a phone screen turning off?”

The novel has a sense of poetic calm running through it, even when heads are chopped off by militants and Brexit is personified as the chopping off of Britain’s head by “nativists” — who are more or less similar to militants. The devil, however, is in the details. Nadia dons a black robe, somewhat like an abaya. Yet we quickly learn that it is not for religious reasons but so that “men don’t f*** with me.” The menacing imagery of shadowy figures emerging from doorways that are constantly described as “dark” and “black” is imposed upon us throughout the novel. Could it be that Nadia’s black robe is symbolic of the fact that she is permanently doused in this ‘blackness’ of the portals and therefore in a state of constant transition? Could both Nadia and Saeed be a manifestation of two sides of the author’s persona — Nadia representing the non-conformist, daring artist, and Saeed the reluctant fundamentalist?

Freudian parallels are drawn between Saeed’s mother and Nadia, both of whom made the first move with men, and both of whom are bolder and stronger than their other halves. Hamid makes it a point to use the word “countrywomen” when referring to “countrymen.”

It is only when both characters briefly decide “not to run, not to play roulette with yet another departure,” and actually get involved in the manual labour of an under-construction refugee camp, that they are, for once, distanced from the cyberworld and in constant contact with the ‘real.’ It is at this point that they interact with the natives of Britain and are pleasantly surprised to find that in personal, face-to-face interaction, they are warm and friendly. Perhaps it is the negative effect of internet-based media that encourages polarisation, creates divides and breeds hostility?

Interspersed throughout the main plot, are short, one-page glimpses into the lives of random citizens of the globe — from Mexico to Marrakesh. This creates a sense of the mass interconnectedness of social media, where we see many lives being led at once. The exotic destinations we are taken to make us feel as though we are devout AirBnB users. One particular glimpse into the life of an old resident of Palo Alto, California, gives us a native’s perspective on the influx of outsiders. The old lady is understandably sad that the lane in which she lives, which was once filled with residents of “old California,” has become overcrowded and filled with unfamiliar faces.

But despite all the thought-provoking insights the novel offers, it has no shortage of clichÃ©s. Nadia and Saeed smoke the proverbial joint on the balcony of Nadia’s apartment. One wonders why the author has delved into this, smoking dope being more a symbol of the status quo than rebellion, in most parts of the globe — unless Hamid is trying to portray the characters as clichÃ©d. The description of a magic mushroom-induced trip sounds stale and predictable, as does Nadia’s longing for a member of a rock band. But the most predictable of all is the way Nadia and Saeed’s relationship plays out. Are Hamid’s Ivy League education and privileged upbringing, infact, shackles that bind him to trends and expectations? Or does he erroneously believe that stereotypes allow a degree of familiarity to which the reader can relate, thus bringing his work a wider degree of acceptability?