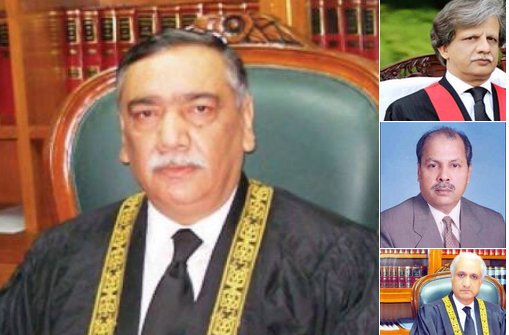 The highly anticipated judgement in the Panama Leaks case was finally announced on April 20 by a five-member bench of the Supreme Court of Pakistan. The prime minister (PM) of Pakistan was ordered to be disqualified as he had, according to two of the five judges of the bench, ceased to be a ‘Sadiq’ and an ‘Ameen’. The majority view ordered for the formation of a Joint Investigation Team (JIT) to probe into evidence provided by the PM during the course of proceedings and/or to consider any other evidence that the JIT may come across during its ‘investigation.’

In the words of a former American Chief Justice, Charles Evans Hughes, “A dissent in a Court of last resort is an appeal . . . to the intelligence of a future day, when a later decision may possibly correct the error into which the dissenting judge believes the court to have been betrayed”.

The judgement was discussed in almost all relevant quarters with Justice Khosa’s dissent note attracting glaring attention. There are various dimensions to his judgement as it appears to have discussed the issue of the PM’s disqualification in great detail, varying from reference to a quote from the famous Mario Puzo novel, The Godfather, to a layman’s estimation of the PM’s statement on the floor of parliament as being untrue. Though the judgement contains two dissenting notes, it is Justice Khosa’s note that is of unique importance, as the same reflects legal wisdom backed by clarity of mind. Justice Khosa and Justice Gulzar’s judgements reveal conclusions reached through solid reasoning. Justice Khosa’s dissent has also been attacked by a few as a reflection of his possible bias against the PM and his family and they base their opinion on the reference to the quote from the The Godfather. Such criticism, for me, is born out of a lack of understanding of both the judgement and the novel. Just because the novel is based on the mafia does not necessarily mean that an analogy cannot be drawn with the same. Justice Khosa qualifies his reference when he further mentions a sentence written by HonorÃ© de Balzac: “Le secret des grandes fortunes sans cause apparente est un crime oubliÃ©, parce qu’il a Ã©tÃ© proprement fait.” (The secret of a great success for which you are at a loss to account, is a crime that has never been found out, because it was properly executed.)

Any judge placed in his position, who genuinely felt this way, could not have reached any other conclusion and the above quote is a true reflection of the issue that was brought before the Supreme Court. The most important aspect of the judgement to be considered is whether Justice Khosa genuinely believes in his judgement. As someone from the legal fraternity, who has been appearing before Justice Khosa and is privy to his reputation as a judge, I feel he does, his past speaking volumes about his ability to pass bold and legally sound judgements. He has never shied away from passing judgements that have far-reaching effects.

An interesting aspect of Justice Khosa’s judgement deals with the conscious regard to the ground realities of our legal system and systematic flaws in the country. He has dealt in a commendable manner, with the issue of Hudaibiya Paper Mills’ National Accountability Bureau (NAB) reference no.5/2000, quashed by the Lahore High Court on merely a technical point, and the NAB’s refusal to file an appeal with regard to its revival. His comments on the conduct of the NAB chairman were not restricted to mere criticism. Justice Khosa went on to suggest a very potent alternative, namely the constitution of an Implementation Bench of the Supreme Court by the Chief Justice, for the purpose of carrying out complete justice with all the power, authority and functions of the NAB chairman, in connection with the Hudaibiya case.

A dissenting note has a legal and moral binding effect on the PM, and a lot of people have failed to appreciate this. In a common-law jurisdiction, dissenting notes carry a lot of weight and the history of the Pakistan Supreme Court’s judgements amply reflects that dissenting notes in all controversial decisions took precedence over the majority view, thus leading to the development of a quality case law later on.

It came as a surprise to me when a very senior counsel termed dissenting notes as meaningless and impotent. He went so far as to say that he doesn’t even read a minority view in a judgement. Dissenting judgements have far-reaching consequences and are morally, if not legally, binding. The present dissenting judgements most certainly merit the PM’s resignation as they have triggered a strong debate in society about the implication of a minority view in the judgement. Almost all opposition political parties, along with professionals, including but not limited to members of the legal fraternity, have demanded the PM’s resignation, clearly highlighting the importance of dissenting judgements. The minority view in the judgement has been able to achieve what the majority view could not, on account of being unclear. The majority view is in contrast to the reasoning behind it, giving rise to questions such as the status of Maryam Nawaz, the role of the PM’s two sons, and the role and muscle of the JIT, as well as several other issues, the future of which remains uncertain.

There is nothing better than when an impressive dissent leads the author of the majority opinion to refine and clarify his or her judgement. A good dissenting opinion can help avoid embarrassment of the court; it can correct the court’s mistakes and prevent mistakes in future judgements. An example of this is the clear disregard of the dictum laid down in Zulfikar Ali Bhutto’s death sentence awarded by the Supreme Court of Pakistan, in all its subsequent pronouncements of a similar nature. This dissenting judgement in the present case shall also act as a roadmap for the majority, in case credible evidence is placed before them by the JIT after 60 days.

Another genre of dissent aims to attract immediate public attention and, thereby, to propel change through legislation. Justice Khosa’s judgement shed light on a glaring issue, igniting a debate to reform various laws, such as those that deal with anti-money laundering and parliamentary privilege. The common man fails to understand the purpose of parliamentary privilege, or of an Anti-Money Laundering Act 2010 that considers money laundering an offence only if it has been committed in aid of another crime. Simply sending money out of Pakistan without going through the legal channels, is not an offence triable under the said act; this has raised questions in concerned quarters. Furthermore, the government’s ill intent became quite visible when the Companies Ordinance 2016 was passed overnight, with provisions dealing with directors of offshore companies. The Inquiries and Commissions Bill 2016 was also tabled in an attempt to control the workings of a judicial commission that was to be formed at the time, for the Panama Leaks case. The government also proposed the 24th Constitutional Amendment, whereby the right of appeal was to be introduced in Article 184(3) of the Constitution of Pakistan. It’s quite unfortunate that the said changes were attempted only to benefit the PM and his family and were never made in good faith.

Although I appreciate the value of unanimous opinions, I will always value dissent when important matters are at stake. As Bertrand Russell aptly put it, “I find more pleasure in intelligent dissent than in passive agreement.” Justice Khosa’s judgement is a symbol of strength for many who had lost their belief in the system. I expect the judges in the majority to revisit their findings upon receipt of, hopefully, an exhaustive report by the JIT.

The writer is a lawyer based in Lahore and an analyst on a Capital TV talk show, â€˜Zanjeer-e-Adal.â€™