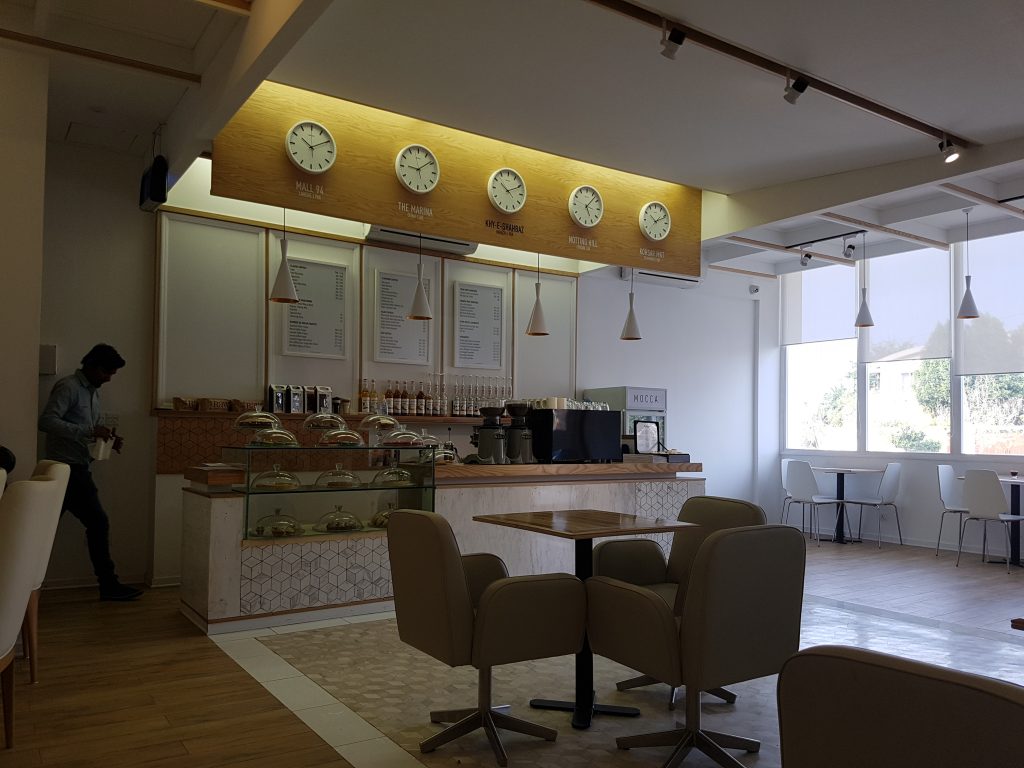 These days restaurants seem to be springing up by the day, especially in Karachi’s Defence Phase 5’s commercial area. However, hardly any leave a lasting impression, perhaps because they have no prior experience of the restaurant business. Mercifully, the relatively new addition of Mocca on Khayaban-e-Shahbaz is not your run-of-the-mill eatery. An Islamabad chain, with branches in Lahore as well, Mocca is a tried and tested cafÃ© that has already received the seal of approval before opening its doors in Karachi.

Far from the image its name conjures, Mocca is a pristine white eatery — from the white walls and almost white leatherette chairs to the white conical lamps hanging from the ceiling — the only colour elements being the picture frames hanging on the walls or the few decoration pieces on the shelves.

The Mocca menu is extensive, if in short supply physically. Although there were five of us, only one complete leather-bound folder was handed to our table; however, we found the variety to be substantial.

From the soup section we opted to try the roasted red pepper, tomato and basil soup. It turned out to be an intelligent choice for the soup was divine, with just the right consistency and texture, and the smoky flavour enhanced its taste. Served with crispy baked bread and a dash of mint chutney, it gave a new dimension to the soup.

For the main course the others in my party decided to try the Mocca Grilled Chicken, Chef’s Special Chicken, Chicken Panini, and Pulled Barbecue Beef, while I opted for the loaded nachos, which is otherwise offered as a starter. Unfortunately, the waiter didn’t bother to check if I was planning on eating it as a starter or as my main course, since I hadn’t ordered anything else, and brought my dish long before everyone else’s. It was just as well that the helping was so huge that I could share it with the others and still have enough left over to last me till everyone else’s meal showed up!

Perhaps, mine was the only disappointing fare that was ordered. Served with salsa verde and ranchero sauce, mozzarella and cheddar cheese, beans, olives, tomatoes and jalapenos, it didn’t taste loaded enough without the standard dollops of sour cream on the nachos. Although it was brought for me when I complained, the meagre helping of sour cream didn’t do the trick, and the nachos weren’t top quality either.

The Chef’s Special Chicken turned out to be quite similar to the Mocca Grilled Chicken, although the former boasted a creamy, chilly and spinach sauce, and the latter a sauce veloute (whatever that means!). Nonetheless, both tasted good and had succulent, generous portions of chicken. While the former was served with a choice of side and veggies, the Grilled Chicken was accompanied by mashed potatoes and veggies. The Grilled Tarragon Lime Chicken Panini was delicious, served with cheese, basil pesto and semi-dried tomatoes, and is something I will definitely order the next time. The Pulled Barbecue Beef, which was like a western version of galavat kebab with cheddar cheese stuffed in a soft, grilled flat bread, was also delectable.

Of course, no meal is complete without dessert. We fell in love with the description of The ‘Forget-About-Molten-Lava-Cakes’ Brownie Melt — yes, that was the name of the dessert! Claiming to be a ‘warm, Swiss chocolate brownie smothered with melted Swiss chocolate ganache served with vanilla ice cream, toasted hazlenuts, fresh mint and cocoa dusting,’ the dessert, though appetising enough, was nothing close to being ‘rich, dark and handsome’ — the tail end of its tall claim. It wasn’t ‘chocolatey’ enough for us five chocoholics but, nonetheless, we cleaned the plate.

Opened a few months ago, with a little more attention to some of its recipes, Mocca should be an exciting addition to Karachi’s gastronomic
offerings.