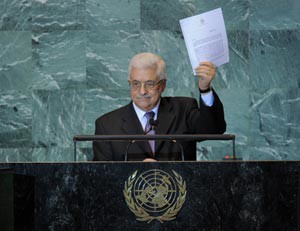 In the last week of September 2011, Mahmoud Abbas received a tumultuous reception in the West Bank on his return from New York, even though he came empty-handed. Many Palestinians had feared that in the face of threats from Israel and the United States, and bullying by some of their allies, the president of the Palestinian Authority would abandon his quest for Palestinian statehood at the United Nations.

To his credit, he didn’t — in part, no doubt, because the loss of face back home would have further eroded his legitimacy. He did, however, compromise by agreeing for the statehood application to be slow-tracked through the Security Council. It was passed on to a committee for consideration, with no declared time-scale for a vote. President Barack Obama had declared at the very outset that America would exercise its veto. The US realises, of course, that such an action would damage its credibility in the Middle East. Its preferred course would be for the request to fail to muster the nine votes it needs, and to that end considerable pressure has been exerted on members of the Security Council.

Two other permanent members of the council, Britain and France, were expected to abstain — and they too, would rather not have to do that, given that it would clearly signal a pro-Israel bias. Nicolas Sarkozy suggested to Abbas that he shouldn’t bother with the Security Council at all but go straight to the General Assembly — where the Palestinian cause is more or less guaranteed the two-thirds majority it needs. The assembly is a far more representative international forum than the Security Council, but a much less powerful one. It cannot confer statehood; a majority vote there would merely enhance the Palestinians’ observer status, enabling membership of peripheral UN committees.

It would nonetheless demonstrate that an overwhelming proportion of governments across the globe favour Palestinian statehood. The support is even greater at the popular level, not least in European countries whose governments are wary of publicly deviating from the US-Israeli line. What’s more, a poll conducted by the Hebrew University ahead of last month’s UN session found 70% support among Israelis for the idea that if the UN voted for a Palestinian state, their nation should accept the decision.

On September 22, author Sefi Rachlevski led a gathering of 80 well-known Israeli intellectuals outside Independence Hall in Tel Aviv in support of a Palestinian state. “Palestine, you don’t need our permission to have a state,” he declared, “Negotiations on its borders can follow.” Historian Yehuda Bauer said a majority of Israelis would support a two-state solution, but warned: “I am afraid of the violent orthodox who have openly established a separate entity (in settlements in occupied Palestinian territory). They pose the real danger to Israel.”

One can only wonder whether it would be possible for a bunch of Jewish intellectuals to express similar sentiments on the streets of New York, where Republican presidential contender Rick Perry, last month, accused Obama of betraying Israel by mentioning the 1967 borders and failing to support the Jewish settlements. He also found it unspeakable that Washington had abandoned Israel’s trusted friend Hosni Mubarak. 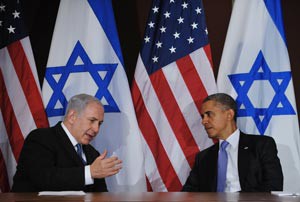 The rest of the world might consider it a trifle odd for anyone to question the Obama administration’s loyalty to Israel — but then a majority of Republican presidential hopefuls seem to inhabit a parallel universe. It wasn’t very long ago that the Congress embraced Benjamin Netanyahu with the fervour it once reserved for George W. Bush, and perhaps the most bizarre strand of fanatical support for Israel is represented by Christian fundamentalists who see it as a potential Armageddon and thereby a conduit to the End Times.

In his speech to the UN, Obama dropped all pretence of even-handedness, leading former Palestinian spokeswoman Hanan Ashrawi to tell the Israeli newspaper Haaretz: “I couldn’t believe what I heard. It sounded as though Palestinians were the ones occupying Israel. There wasn’t one word of empathy for the Palestinians.” Abbas, who had yet to make his own speech, was seen shaking his head and then holding it in his hands. Netanyahu snubbed the US president — it’s no secret that the two of them cannot stand each other — by being absent during his speech, but later praised it and described the veto pledge as a “badge of honour.”

The strident opposition from Israel and the US contributed a certain cachet to the drama of the Palestinian bid for recognition, creating the impression that both countries feared its consequences would be more than symbolic. Israel combined the stick of threatening to suspend the payment of taxes it collects on behalf of the Palestinian Authority with the carrot of immediate negotiations, with Netanyahu offering to open talks in New York itself.

The trouble, of course, is that over the years negotiations have led nowhere and the so-called peace process has become a means of sustaining the status quo. In fact: Israel, which already directly controls 60% of the West Bank, has continued to expand its encroachments on Palestinian territory, which have always been illegal under international law, but whose growth attracts only the mildest of reprimands from Washington.

Abbas, who was both America’s and Israel’s preferred successor to Yasser Arafat, bent over backwards to justify their trust in him, but found it led nowhere. Even now he may not have completely realised that a two-state solution based approximately on the 1967 borders has never been Israel’s intention, notwithstanding widespread support among Israeli citizens for such an outcome. Netanyahu may be the first prime minister to have categorically spoken of two states, but he also heads a government beholden to religious and political fanatics, and therefore even less likely than its predecessors to negotiate in good faith.

The Palestinian demand for decades now has been for an independent state based on 22% of historic Palestine. (When the same UN sanctioned Israeli statehood in 1947, the portion offered to Palestinians was 44%). They can hardly be expected to accept less than that. Mutually agreed land swaps could be a way for illegal Jewish settlements contiguous to Israel to be legally annexed, but there are plenty that would have to be dismantled for even a vaguely coherent state of Palestine to be established. Is that ever likely to be attempted? Certainly not without unprecedented American coercion. And what are the chances of that?

Some Palestinians and Israelis believe that the “facts on ground” have gone too far for a reversal, and that the only viable solution is a single Israeli-Palestinian state. Such a country, if it were to be democratic, could obviously not be a specifically Jewish state. The concessions required for such an outcome — and the complications it would inevitably entail — are barely conceivable.

The events of this year have transformed the regional atmosphere, much to Israel’s consternation. But the Palestinian spring that Abbas has lately been trying to evoke remains something of a pipe-dream. The dramatic UN option was something of a last resort for the beleaguered leader, but if the bold gesture pays no dividends in the short term, the renewed disillusionment of his constituents could produce unpleasant consequences. 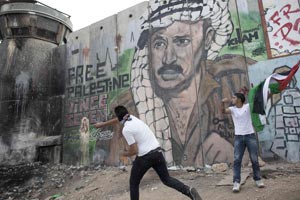 Part of the problem with the stalled peace process has always been America’s nonsensical posture as an honest broker. Sarkozy has lately suggested enhanced European involvement, possibly alongside Arab states that have relations with Israel. That sounds like a considerably better idea than the periodic dispatch to the region of blatantly pro-Israeli interlocutors such as Dennis Ross and Tony Blair. But will Israel — and, by extension, the US (the one being a veritable arm of the other, to paraphrase Mike Mullen) — permit any diplomacy that threatens to produce results? Sure, Israel’s subjection to the sort of international opprobrium that proved positively challenging for apartheid South Africa could indeed precipitate a more realistic mindset. But that’s about as likely as the onset of the End Times.

Statehood would have transformed the occupied territories into an occupied state that could have sought international assistance to liberate itself. The moral approbation implicit in the change in status that a General Assembly vote may confer this month or later in the year could marginally enhance the Palestinians’ bargaining power but won’t necessarily get them far.

In the past few weeks there have already been incidents of violence and intimidation, mostly provoked by the heavily armed illegal settlers. The prospect of further bloodshed, in which Palestinian suffering is invariably exponentially greater than Israeli pain, cannot be ruled out. In which case, history will record yet another instance of autumn dressed up as spring.