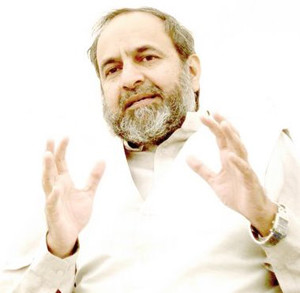 If you were heading a religious TV channel, what sort of programming would you propagate and design?

I would design religious programmes that provide viewers with an opportunity to look at the arguments of the views expressed by various religious scholars. I would invite the youth in particular to express themselves freely on the religious views they are being exposed to. Although I would be interested in putting across the right understanding of Islam — a moderate, soft and sensible image of it — I would not like my viewers to be exposed to one view only. I would want them to form their opinion intelligently.

How would you assess the quality of religious programming at this point? What does it lack in terms of content and credibility?

Most of our religious programmes are a reflection of the religious understanding of our society which, unfortunately, is based on a dogmatic approach. Religious programmes are therefore a repetition of what is already accepted by the society. At best, the viewer gets additional information about what he already knows. The intellectual and practical challenges posed by the modern world are normally not addressed.

What, in your view, is the definition of a religious scholar? And what is his role in the public realm?

What is the responsibility of religious personalities who appear on television towards their audiences?

They should be able to intellectually satisfy the viewers on the questions they have regarding various religious issues. The viewers should feel comfortable about the views expressed in religious programmes not simply because of the emotional rhetoric employed by the scholar, but because of the quality of arguments presented by him.

Do you think that the content continually being aired on religious programmes is authentic? What kind of sources do you think should be referred to?

Many programmes give a one-sided view to the audiences. While the Quran and Hadith are employed to present a religious view, the presentation is normally one-sided.

How do you account for the disparity of opinions on different channels?

I see it as a reflection of the reality that there are diverse religious views on the same issue. I am not disappointed that the views are varied. What disappoints me is the fact that normally a one-sided picture is presented by our channels and views other than those of the presenter are completely ignored.

But wouldn’t these disparate views contribute to an overall sense of disunity among Muslims in Pakistan?

It is not disparity in views which is the cause of disunity among Muslims. It is natural for views to be different. In fact, I would not thrust one view upon all Muslims in the name of unity. Because we think, therefore we differ. Unfortunately, most of us differ without even thinking.

Do you subscribe to the views expressed by religious preachers on television regarding women and minority rights in Islam?

Most of the views expressed about women and minorities are mistaken.

Do you believe some scholars are pursuing foreign agendas because there is money coming in from these sources?

It may well be possible, but I cannot say this with certainty. I think it is better not to speculate and base our opinion on visible realities.

What can television preachers do to curb sectarianism in Pakistan? If Islam is a religion of peace, then why is there war between sects?

They need to talk sense, tell people to open their minds, form their own opinions, and encourage research and debate on religious matters.

The NCSW research reveals that several scholars on television have propagated the notion that Islam is superior to other religions: Do you subscribe to this view?

It’s not a matter of superiority. Islam is the last message of God; other religions were earlier versions of it. However, Muslims must behave decently and preach intelligently to bring across this fact before others. Meanwhile, there is no need to believe that we are superior to others. We are going to be judged not quite as much by our faith as by our attitudes on the Day of Judgment.

How does a religious scholar combat extremism on television?

By presenting arguments to show that extremism is unIslamic, which indeed it is.

Has the line between religion and politics blurred, so that television preachers misuse their platforms to advocate certain agendas?

I think the problem is primarily with the way religion is being taught and understood. Other factors only worsen what is already bad. We should focus on establishing institutions that will help train and produce good scholars.

Read an interview with Dr Khalid Zaheer from December 2010 where he discusses blasphemy and the blasphemy law in Pakistan.