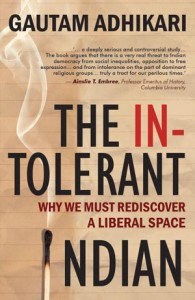 Is India Really Secular?
Indians are often accused of not being sufficiently self-critical, unlike liberal Pakistanis who tend to take almost masochistic pleasure in publicly declaring the shortcomings (and there are many) of their nation. In The Intolerant Indian, Gautam Adhikari proves how wrong this perception is — though that is far from his objective in this soul-searching essay.

Gautam Adhikari is currently a Fellow at the East West Centre in Washington, DC, and a former executive editor of The Times of India. As a journalist working in India during some of the country’s worst incidents of communal violence, he brings direct knowledge and insight into the issue of growing intolerance in India. However, his is more the voice of an anxious liberal.

The lynchpin of The Intolerant Indian is a critique of Indian secularism, a concept and system that the majority of Indians rightly take pride in. Adhikari does an astute analysis of what secularism normally entails, as manifested in western democracies, and the version that the Indian government has ended up pursuing. He points out that while B.R. Ambedkar, the man behind the Indian constitution, remained uncompromising on the issue of secularism, Jawaharlal Nehru, though sharing the same idealism, adapted it to suit the unique needs of a multi-ethnic and multi-religious India.

In exploring what India had aspired to be and what it has become, Adhikari raises the question:

“Is secularism at all possible in its true form in a deeply religious country such as India? Those who say it is unsuited to the fabric of a religious country and should, therefore, be abandoned as an ideal are at least consistent in their position. Problems arise with the position of those who argue that a country like India must be secular but, as they try to implement secularism, feel compelled to dilute the concept. That dilution is passed off in India as merely another form of what some call ‘non-western’ secularism; in fact, it is unique to this country, conditioned by circumstances in which the nation was born and survives. It is neither secularism as it is understood and practiced in other nations that profess to be secular nor does it fit the definition.”

At the time of Independence, Indian leaders took a conscious decision to choose a secular identity for their country. This was partly in response to Pakistan’s emergence as a homeland for Muslims, with an ambiguous Islamic identity, as well as in recognition of the insecurity felt by millions of Muslims who remained in India post-partition. The impact of the bloodshed based on religion was also fresh. In dissecting Indian secularism, Adhikari takes a no holds-barred and critical look at various parties and institutions that have damaged the ideal of secularism. Mildly critical of Nehru, the author is harsh on his successors, particularly Indira Gandhi and Rajiv Gandhi, as well as the Congress Party which, much more than the Bharatiya Janata Party, claimed to be the upholders of secularism.

There are many instances in India’s post-Independence history that exemplify the deviation from secularism and the rise in intolerance. There are cases of extreme violence against non-Hindus: Muslims, Sikhs and Christians. Dalits, though Hindu, have not been spared because of caste considerations. The Congress-incited killings of Sikhs in 1984, following the assassination of Indira Gandhi by her Sikh bodyguards, the massacre of Muslims in Gujarat in 2002 and the destruction of the historic Babri Mosque in December 1992 are unedifying milestones that mock the claim of Indian secularism.

The Intolerant Indian records all of the above and more. Moreover, Adhikari also takes a critical view of the decisions handed down by the judiciary in which the principles of secularism have been abandoned and judgments given on the basis of religion. The prime example is the dispute concerning the Babri mosque in which the Supreme Court, perhaps in an effort to appease the Hindu fundamentalists (more than the Muslims), gave a judgment that had clear religious interpretations and overtones.

Apart from the judiciary, successive governments in India have taken the expedient route when confronted with an ostensibly religion-based issue and pandered to their constituencies. The 1985 case of Shah Bano exemplifies how the Rajiv Gandhi government pandered to the most fundamentalist Muslim opinion at the expense of a poor Muslim woman who lost her claim to alimony after being divorced. In the Shah Bano case, the liberals and the BJP were one in demanding a uniform civil code for all. And the author rightly points out, deviations from secularism whether to please minorities or otherwise have contributed to the emergence of the intolerant Indian. He also cites the case of Bangladeshi writer, Taslima Nasrin, who was hounded out of India, and the banning of Salman Rushdie’s The Satanic Verses (in fact, India was the first country to ban this book, much before Ayatollah Khomeini’s fatwa). Both actions were taken in fear of the Muslim reaction. And, in different circumstances, activist and writer Arundhati Roy faced the wrath of not just Hindu fundamentalists, but a broad section of the media as well when she said that Kashmir was not an integral part of India.

Gautam Adhikari’s quotes extensively from the writings and analyses of several prominent Indian academicians on the interpretation of secularism and, indeed, whether it is even practicable considering India’s diversity. His essay is like a wake-up call for Indians, particularly those believing in, if not fully adhering to, the values of secularism. He makes a strong case for liberal voices to be heard and to reclaim the space that is being increasingly encroached upon by the ‘intolerant’ Indian.

This book review was originally published in the October 2011 issue of Newsline under the headline “Is India Really Secular?”