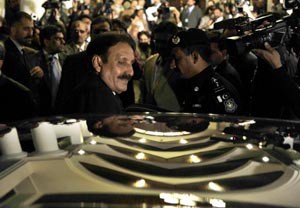 The consistently rising graph of the death toll in Karachi to frightening and unprecedented levels finally forced Justice Iftikhar Chaudhry to take notice of the volatile situation in the city. On September 5, 2011, soon after the Eid holidays, a five-member bench of the Supreme Court comprising Justices Anwar Zaheer Jamali, Sarmad Jalal Osmany, Amir Hani Muslim, Ghulam Rabbani and Chief Justice Iftikhar Chaudhary began its hearings on target killings in Karachi. The hearings concluded on September 16, but the apex court continues to monitor the law and order situation in Karachi, and has been receiving reports from law enforcement agencies on a regular basis. Meanwhile, the judgment in this extremely complex and important case, affecting the life and property of nearly 20 million citizens of Karachi, is anxiously awaited.

It is quite clear that both the federal and Sindh governments have failed to enforce their writ and provide security to their citizens or abide by the constitution and the rule of law. Karachiites are virtually being forced to live under the reign of various mafias and terrorists. Director General Rangers, Major General Ijaz Chaudhry remarked that militant groups affiliated to various political and ethnic parties were involved in violent activities in the city and the situation was worse than in Waziristan.

The obligations of the federal and the provincial governments are clearly defined in Articles 4, 5, 9, 14, 17(2), 19, 24, 25 and 256 of the constitution. And the holders of constitutional offices are committed to perform them without fear or favour. It was the failure of the executive to discharge these vital constitutional duties that compelled the Supreme Court to undertake this exercise under its inherent suo moto jurisdiction, in the interest of the public as authorised, inter alia, by Article 184(3).

As a concerned citizen of Karachi, I made it a point to attend the proceedings on some days. I observed that the majority of the political parties, both in the government and in the opposition, including the PPP, ANP, MQM and Jamaat-e-Islami, the Sindhi nationalists as well as leaders of the Bar Associations of the District and High Courts, and representatives of civil society made their submissions to the court with supporting documents, clippings from the print media and, in certain instances, official reports including those prepared by a Joint Investigation Team (JIT) comprising the ISI, the MI, CID and the IB. Most of them clearly identified or obliquely pointed out those groups or parties that were responsible for the unabated terrorism and target killings in Karachi. The Jamaat-e-Islami submitted a DVD of former home minister Zulfikar Mirza’s fiery speech at the Karachi Press Club, and asked the chief justice to summon Dr Mirza as an “important witness” for his disclosures about the Karachi violence.

To this, the chief justice remarked, “What does a court of law have to do with political statements? If Dr Mirza has something to say he should file an affidavit in court.”

But Dr Mirza stayed away. Representatives of the ISI and other intelligence agencies also submitted their reports in the court or during in-camera sessions.

In my view, whatever was submitted in the course of the hearings was sufficient for the apex court to determine the causes of terrorism in Karachi and the forces behind it, as well as identify the reasons for the inability, incompetence or unwillingness of both the federal and provincial governments to check, contain and eradicate the miscreants and target killers. 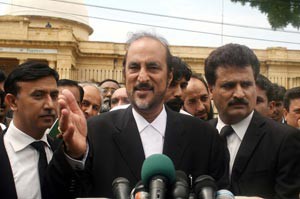 Now that the Supreme Court hearings are over, many concerned citizens are curious to know the end result of this exercise. Will it serve the interests of the people and provide them with a sense of security? Will it contain terrorism and ensure the arrests and punishment of the killers? There are no easy answers to these questions. In fact, the apex court is faced with the difficult task of pronouncing a substantive judgment, due to various limitations of their jurisdiction and several restraints imposed by the applicable statutes. Moreover, I doubt if the court would go to the extent of naming those terrorists or those organisations/parties against whom a considerable amount of material has been placed on record, both by concerned officials of the intelligence agencies and other participants at the proceedings. At the same time, I don’t think the apex court would declare that the government or its coalition partners have failed to conduct the affairs of the state in accordance with the constitution or the laws. Furthermore, we neither have any provision in the constitution of the nature of the infamous deleted Article 58(2)(b), nor have I found any judicial precedent of the superior courts dismissing or dissolving any government, of their own accord, on charges of failure to act in accordance with the constitution or the laws. Even if, for argument’s sake, we assume that we had any provision similar to the deleted Article 58(2)(b), the powers thereunder could only by exercised by the president. Today, we ostensibly have a parliamentary form of government, but for all practical purposes, it is the president who is calling the shots on all important issues, as he happens to be the “co-chairman” of the PPP.

In the recent past, we have a precedent of the Supreme Court directing the removal of the IG Sindh and DG Rangers in view of the brutal murder of a citizen Sarfaraz Shah, at the hands of one or more soldiers of the Rangers in Karachi’s Boat Basin area. What sentence, if any, will be awarded by the Supreme Court for the target-killings of Karachi’s innocent citizens that numbered more than 1,500 this year, over 1,800 in 2010 and 1,200 in 2009? Justice demands that some heads roll for these abominable crimes. The mafias operating under the patronage of various political parties/groups, who form part of the government, and who have unleashed a wave of terror in Karachi, must be disbanded, prosecuted and punished. It is worth recalling that in January 1997, on the mere unproven allegation of “extra-judicial killings,” the dismissal of Benazir Bhutto’s government was approved and endorsed by the then honourable judges of the apex court. The continuing, unchecked brutal killings of the citizens of Karachi cannot, by any stretch of logic or law, be deemed to be judicial killings. Hundreds of dead bodies have been found on the streets of Karachi, but rarely have those who committed the murderers been arrested. Political parties have become “militant outfits,” remarked Justice Chaudhry. He warned that the martial law sceptre could be invoked in view of the deteriorating law and order situation as has happened in the past.

One hopes that the honourable judges of the Supreme Court, in their collective wisdom, pronounce a judgment that would help in the containment, if not complete eradication, of terrorism and ensure the elimination of various mafias operating in the city as well as ensure the arrest and punishment of all terrorists/target-killers. If this were to happen, then the suo moto hearings initiated by the Supreme Court will have served the supreme cause of protecting the life and property of the citizens and ensure the rule of law. And the exercise will not have been in vain.