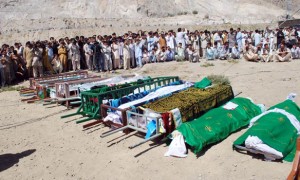 Sectarian violence targeting the Hazara community in Balochistan is now a routine matter. The cold-blooded murder of 26 innocent pilgrims on September 20 near Mastung, en route to visit religious sacred sites in neighbouring Iran, comes just four months after an incident of a similar nature, in which a vehicle carrying members of the Hazara community was attacked.

The pilgrims, 22 of them of Hazara origin, were travelling to Taftan in Iran, in a passenger bus from Pakistan. Just as the bus reached Ghanja Dori (an area in Mastung and also the home district and constituency of Balochistan Chief Minister Nawab Muhammad Aslam Raisani) unidentified armed men in a grey Land Cruiser, followed by a white pick-up truck, stopped the bus. “Suddenly, a vehicle blocked our way,” recalls Khushal, the conductor of the bus. “Eight to nine armed men surrounded the bus and asked the passengers to step out. As soon as the passengers alighted, the masked men carrying sophisticated weapons, opened indiscriminate fire at them.”

After taking the lives of 26 people and injuring three others, the attackers proceeded to make an easy escape. When news of the incident spread to Quetta, three people belonging to the Hazara community rushed to the scene to assist with rescue activities. Unfortunately, when they reached Akhtarabad in Quetta, unknown assailants opened fire at them, killing them on the spot. With that, the death toll rose to 29 the same day. The responsibility for both the attacks was claimed by Lashkar-e-Jhangvi (LeJ) — whose chief, Malik Ishaq, was released in July this year after being cleared of all charges by the LHC — and the Khalid bin Walid Force, the latter has only just surfaced a month ago.

Law-enforcement agencies arrested 250 suspects from Quetta and Mastung in connection with the attack, which, however, did little to put a stop to the killings. Four days later, five coal-miners, also Hazaras, were attacked while on their way from Quetta to Mach town. Three of them died on the spot while two sustained injuries. The nine assailants fled the scene on two motorbikes and a car.

The Quetta-Taftan route is the only way to travel to Iran by road. In recent times, this route has become particularly perilous and there have been several attacks on Pakistani pilgrims travelling to Iran. During the past one-and-a half years, four serious attacks were carried out, but the provincial government and law-enforcement authorities responsible for the pilgrims’ safety have yet to secure this route.

The administration has conveniently laid the responsibility, and blame, of the Mastung attack on transporters who manage the route, as well as on various Shia organisations. “We had asked Shia organisations to inform the administration about the departure of any pilgrims. Likewise, transporters were also supposed to inform the administration about the pilgrim journeys they’d arranged, so that at our end we could oversee the arrangements made for their safety. However, due to a lack of communication on their part, this tragic incident occurred,” said the Home Secretary of Balochistan, Akbar Durrani, in an interview.

Before 1998, there was only one incident of sectarian killing when the then education minister of Balochistan Sardar Nisar Ali Hazara was attacked in a high-security zone in Quetta city, where he sustained serious injuries and his bodyguard was killed. In recent years though, there has been a surge in sectarian attacks in the province. Notably, after the murder of two Sunni religious scholars, Maulana Abdul Karim Mengal and Hafiz Zubair Ahmed in July and August this year, an immediate backlash resulted in the deaths of 11 Hazaras. Then, on August 31, a suicide bomber attempted to attack the Imambargah of the Shia community on Eid-ul-Fitr but was unable to reach his target and instead blew up a vehicle at Major Muhammad Ali Shaheed Road, killing 13 people, again Hazaras. In the three weeks following August 31, 42 people lost their lives in separate attacks. Sadly, attacks against the Shia communities of Pakistan is nothing new, but attacks have continued to escalate since last year. 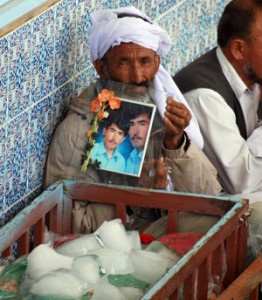 “If the government cannot provide us security, then at least it should provide us a piece of land for the burial of our people as we have no burial spaces now,” says Zohra, who, along with a large number of women, had gathered at the Hazara town graveyard to protest against the killings. The Hazara community has lived in Quetta since before the partition of India. Their forefathers arrived from Bamiyan, Afghanistan, and settled in the Balochistan province while the British still ruled united India more than a hundred years ago.

The provincial government has temporarily banned pilgrim-travel to Iran without a no-objection certificate and has urged the Hazara community to inform the home department about travel plans to Iran or to any other part of Balochistan, in order for it to ensure security. But these are short-term, short-sighted measures.

The provincial government received flak from the Balochistan High Court for presenting an “inadequate” report on the Mastung incident to the BHC, causing the chief justice to remark that the provincial government was pushing Balochistan towards its destruction with the careless implementation of a vague security policy in the province. Prominent human rights activist and President of the Supreme Court Bar Association Asma Jahangir had something similar to say. While addressing the members of the Balochistan Bar Association in Quetta after the Mastung bus incident, Jahangir stated that the deteriorating situation in Balochistan was a result of government policies and advised the High Court to take suo moto notice of the incident. She added that the division among the Baloch people was being fostered by such detrimental policies. However, she did add that often politicians were sidelined from the decision-making process and, instead, power was appropriated by the security forces in Balochistan. Nevertheless, if the current situation prevailed, said Jahangir, Balochistan could become the ideal playing field for superpower war games.

Political observers believe that unless a serious commitment is made by law-enforcement agencies in Balochistan to curb incidents of sectarian killings, the province will be further pushed towards an increasingly volatile situation.