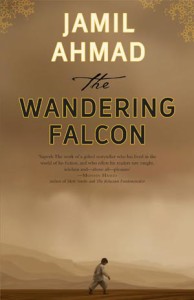 Fact and Fiction
Jamil Ahmad’s The Wandering Falcon is an extraordinarily authentic piece of fiction. It takes the reader on a journey through Pakistan’s tribal belt as it was for about two decades after partition. By the time the journey ends, not only foreign readers but Pakistanis too will have learnt much about life in this region. They should acquire a fair idea of the rugged terrain, the valleys between high mountains, the forbidding deserts, the fierce sandstorms, and the people who brave all these elements and find ever new ways of survival and try to come to terms with the people living across the border in Pakistani towns.

The study begins at a military fort in Balochistan, where the borders of Iran, Afghanistan and Pakistan meet, and which has survived the vagaries of harsh weather. Here, a love child is born to a couple pursued by men who are determined to kill them in accordance with the custom of siah-kari. They are held back long enough to enable the writer to bring to life the soldiers who man the fortress, their hardships, their discipline and their reserves of mercy. How the orphan child grows up under the care of one foster-parent after another is an allegory on how tribal children survive.

The scene shifts eastwards into the land of Pakhtun tribes, where veterans of battles with the British are succeeded by young men who must find new ways to survive in days of peace and to contend with a steady decline in their traditional privileges.

We meet a host of people. There are the Powindahs who cannot understand why they can’t take their herds of sheep to Pakistan for grazing and are frustrated when they fail to break through the barriers created by Pakistani troops. Then there are young men who plan kidnappings for ransom — to meet needs that sound petty. The political agents deal with law and order problems the way the British did. In this milieu there is room, up to a point, for clever mendicants and go-betweens. We meet women too, who toil against odds created by both the environment and their male masters. There are stories of youthful love, betrothal and marriage, followed by tales of women’s betrayal and their sale by auction. We also find restaurant owners, boys working for them, brokers, pimps, et al.

Jamil Ahmad’s admirably managed narrative is derived from comprehensive knowledge of the land and its people acquired over long years of close contact. He understands his characters and faithfully records their thoughts and impulses, and organises their interplay without passing judgment on their actions and thoughts. Ahmad also loves brevity and can get by without any communication losses.

The author succeeds in convincing the reader that the situations and the actors involved therein have been gathered from real-life stories and memories buried in the consciousness of the people. The best example perhaps is the narration of Nauroz Khan’s betrayal by the Ayub regime. The Baloch sardar simply could not understand a “civilised authority’s” treachery and the execution of his sons who had persuaded him, against his will, to surrender. This dark chapter in Baloch history has rarely been discussed as humanely and as effectively as in this book.

Jamil Ahmad, who served in the region for long as a senior civil servant, has obviously benefited from living in the area of action and from his intimate contacts with the actors. He has managed to combine in this slim volume the tantalising features of an old eastern tale and the free flow of events in the style of modern fiction.

This book review originally appeared in the October 2011 issue of Newsline under the headline “Fact and Fiction.”