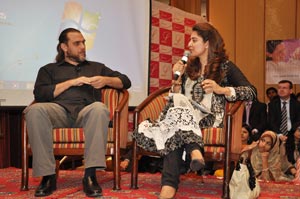 One has to hand it to Uzra Dawood, CEO of Dawood Capital Management Ltd. No matter what the conditions in the city, she manages to rope in a sizeable audience for her programmes and a number of impressive participants to boot. The Ladiesfund® Entrepreneurship Conference, which was initiated by her last year, was held again recently, attended largely by university students packed like sardines in the vast hall.

Hosted by Dawood Global Foundation in partnership with the British Higher Education Commission and Avari Towers, the purpose of the conference is to encourage young Pakistanis to become entrepreneurs. Two groups of panellists comprising successful entrepreneurs are invited to share their experiences with the audience and answer any queries they may have.

Like the previous year, Sidra Iqbal ably compered the conference that began with a few speeches: Dawood spoke about the benefits of virtual businesses, Gordon Gorman, GM Avari Towers, Karachi spoke on the prerequisites for entrepreneurship — mercifully he is humorous so his speech was entertaining even for those who had heard him the first time round — and Francis Campbell, British deputy high commissioner, spoke briefly and wittily on the importance of entrepreneurship in Pakistan.

The first round of panellists comprised Wajiha Malik of Olive soap, Zeenat Saeed Ahmed of Taneez, Ayaz Khan of Okra and Rohail Hyatt of Coke Studio. While the last was obviously the icing on the cake for the youngsters in the audience, it was Zeenat Saeed who impressed with her candid confessions. She had no qualms in stating that she launched Taneez with a small exhibition, but when she received an overwhelming response to her products and wished to establish an outlet, she had no capital. So she set up shop by “borrowing from all and sundry, including my driver.”

The second panel consisting of Naheed Mashooqullah (architect), Hassan Sheheryar Yasin (designer) and Naila Naqvi (Pie In The Sky, Chatterbox), proved to be just as interesting, if not more. Naheed Mashooqullah spoke from the heart, advising everyone to “celebrate individuality.” She recalled her childhood and the fact that teachers and even friends used to mock her for her unique ideas and advised her to conform to rules. She urged all, “If you have a mad idea, just go for it.” She also mentioned that there was no correlation between academic grades and success in life, and that all children should be celebrated and encouraged as they possess the potential to do great things in life.

But Hassan Sheheryar Yasin, who had flown in from Paris Fashion Week to participate in LEC 2011, was the favourite of the day. Cheeky, witty and occasionally outrageous, he spoke confidently about how he had entered into a business partnership with two classmates after graduation but was fired within six days. Today, he has a thousand people in his employment.

An enlightening and motivating event, the funds raised from its sponsors will be utilised for fellowships and scholarships, as well as women development initiatives.