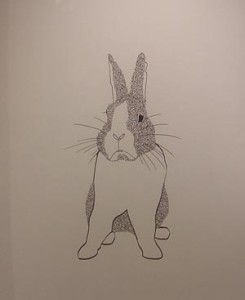 The Indus Valley School of Art and Architecture held an art exhibition entitled ‘Psychological Space’ (October 5-22) to promote the work of eight upcoming artists. The exhibition was intended as an investigation into the emotional complexities in art. However, since all art is, in a sense, invested in the emotional or psychological, the works on display did not cohere to a single theme or style. Anbrin Naz, the curator, shared that she made the concept ‘Psychological Space’ deliberately broad so that the selected artists would not be restricted in their use of mediums or in their approach to their subjects. Therefore, an oil painting of dismembered limbs by Scheherazade Junejo hung next to an abstract installation made of tape by Sana Obaid.

Although there was no adherence to a singular subject or theme in the art, there were some stylistic and thematic intersections between the different works. Muzummil Ruheel’s paintings, ‘Khargosh’ and ‘Murgi,’ are stark line drawings that stand out in their simplicity and restraint from the rest of the artwork on display. However, what initially seems to be cross-hatching on the animals’ bodies, upon closer inspection, reveals itself to be intricate calligraphy. Ruheel says he took the barely legible words from the news on television and that his work, in essence, is a comment on how words are no longer read, but are instead perceived as visuals. “I want to take tradition further,” he states, and the incongruity in using calligraphy, traditionally associated with religious or political texts, to create images of harmless animals is not only witty, but also surprisingly sacrilegious. 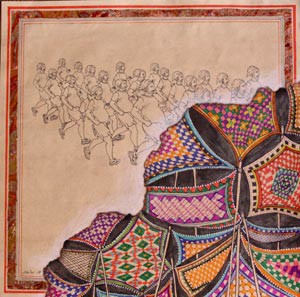 Another artist who plays with traditional forms is Hina Farooqui. Her style evokes traditional miniature art forms but she laces it with humour by depicting, for instance, a horde of overweight Mughal men jogging in shorts. Both Ruheel and Farooqui‘s experiments with traditional forms, to comment on the modern psyche, turn out to be playful and unexpected.

In fact, much of the art on display played with expectations and reactions. Noor us Sabah Saeed’s studies of animal skeletons, barely visible against the white of the paper from a distance, exude a sense of tranquillity rather than morbidity. The artist made these drawings in a zoology lab to better understand the workings of animal, human and mechanical joints. The calmness her drawings reveal the workings of an artist who is slowly developing her study. ‘Psychological Space,’ in effect, refers not just to the emotional connection between the viewer and the artwork but also, and perhaps more importantly, to the artist’s process of creating art.

Scheherazade Junejo and Adeel uz Zafar, both talk about the relationship between the creation of art and the artist’s psyche. Zaffar has taken magnified images of parasites from the Internet and engraved mesh or gauze-like structures all over them. The magnified parasites could easily be mistaken for mythical sea creatures, with their teeth snared and their bodies writhing against superimposed nets. Zaffar’s art evokes turmoil, even violence, but the process of engraving delicate white lines that glow against the grayish photographs is a pleasurable process for the artist. “There is a catharsis in creation,” Zaffar remarks, “and the repetitive movement provides a meditative quality to creating the work.” While Zaffar finds solace in the creation of art, Junejo’s style of working fuels her obsessive nature. 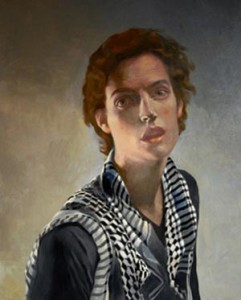 Junejo methodically plans out every detail of her art using photographs and reference drawings before even picking up her paintbrush. Her extreme fascination with the human body is evident in her work. The human body is both eroticised and de-eroticised, and the bald female nudes and severed limbs make the human appear to be alien.

Salman Toor’s portrait ‘Uncle’ of a man caught with a startled expression is done in the style of western masters such as Gustave Courbet. The subjects of his works, though, are decidedly local, with their shalwar kameez and keffiyeh. Toor’s other work is a dramatic, almost Gothic, painting of two men caught with their arms outstretched in anguish. Toor then layers the painting with lines, dots and half-hidden details such as an emblem of the star and crescent, and small line drawings of human figures. This use of layering is also seen in Farooq Mustafa’s ‘Ambiguous Journey’ series. Mustafa incorporates bright colours with Japanese iconography and script to depict his feelings about a recent trip to Japan. The country’s landscape is reduced to a flattened image that is impenetrable to any wanderlust traveller and the places depicted appear unreal — as if conjured up by a child’s imagination. 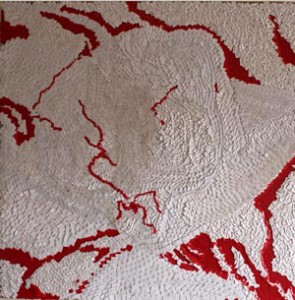 While Mustafa’s pieces offer easily recognisable images such as islands, waves and buildings, Sana Obaid’s work is the most abstract of the lot. Entitled ‘Epiphany,’ it consists of tape woven in abstract patterns. Her work is full of movement as the little pieces of tape wind around the canvas and since Obaid speaks of fascination with the divine in her artist’s statement, it is not surprising that she has turned to abstract forms.

Indus Valley’s decision to exhibit the works of younger artists who are not necessarily household names as yet should be lauded. The art, in general, was in conversation with traditional forms and yet delved into themes and ideas that were decidedly modern.