It hasn’t been a good year for Pakistan-US relations. The Raymond Davis affair, the Abbottabad raid on Osama bin Laden, ongoing disagreements on North Waziristan, accusations by Navy Admiral Mike Mullen that the Haqqani Network is a “veritable arm” of the ISI, and continued controversial drone attacks have all done more than test the relationship: they have weakened it, heightening distrust and enraging both sides. Now with “memogate” grabbing headlines, the US has become a player in another Pakistani political controversy. Admiral Mullen says that he indeed received an unsigned memo from the Pakistani government asking for US help against a possible military takeover in Pakistan, but that he did not find the correspondence credible. Meanwhile, US Ambassador Cameron Munter says his country will cooperate in any inquiry. Both comments show the US as a cooperative ally to the sitting government. Last month’s high-level Pak-US meeting in Islamabad showed hints of an improving relationship too. When Secretary of State Hillary Clinton’s delegation left Islamabad, officials on both sides pointed to a thaw in bilateral relations. Clinton asserted that her visit had solicited agreement on 90-95% issues on the table, while Islamabad insiders said the visit helped reduce tension between the estranged allies. Below is a look back at the October 20 meeting where the future of Afghanistan continued to be the key determinant in the direction and health of the Pak-US partnership. 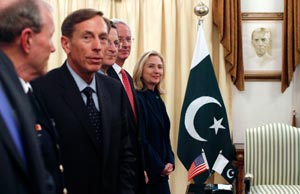 The sun is yet to shine on frosty US-Pak relations, but official quarters in Washington and Islamabad have hastened to link the recent thaw and the durability of the bilateral relations, on the heels of Secretary Clinton’s visit, to both sides agreeing to a script that blends their strategic priorities.

The tough-talking trio, CIA’s new boss David Petraeus, Chairman Joint Chiefs of Staff Martin Dempsey, and Secretary of State Hillary Clinton, descended on the Margallas in late October to rescue the fragile relationship from the war of words that had broken out between the two sides. The unusually high-powered US delegation led many here to conclude that Washington was telling Islamabad that all elements of the US administration (military, intelligence and the state) shared the common goal of persuading Pakistan to do more in the war on terror. And soon after touchdown in Islamabad, Secretary Clinton’s job as a diplomat dictated her priorities. She was here to salvage the bilateral relations from mutual mistrust and pessimism and get rid of the bad blood that fuelled the verbal brawl between the allies, which has been attributed to a number of factors.

Firstly, the Pakistani establishment is still wounded by the May 2 incursions of US Navy Seals deep into the country’s heartland, which led to Al-Qaeda chief Osama bin Laden’s death. Then, mid-October, an otherwise level-headed, and now retired, Chairman Joint Chiefs of Staff Admiral Mike Mullen blamed Pakistan for covertly supporting Afghan guerrillas that attacked the US embassy and NATO headquarters. Following those attacks, a suicide bomber, linked to the Haqqani Network, assassinated the former Afghan president Dr Burhanuddin Rabbani who was championing talks with rogue Taliban groups. For the Afghan and US authorities, this came as a blow to their reconciliation efforts, given the authority and influence Dr Rabbani brought with him. And yet, botched US efforts to initiate talks with the guerrillas independent of Islamabad, only led to public embarrassment for the Afghans and US interlocutors.

Hence, Clinton had to do more than just mend fences during her two-day visit. Spilling the beans about her meetings with top policy architects in Islamabad, the secretary asserted that her visit had solicited agreement on 90-95% issues on the table. “So now what we want to do is figure out where we might have some differences,” she added, signalling to the persisting grey areas.

In her latest testimony on Afghanistan and Pakistan before the House Senate Committee, Secretary Clinton said her visit forcefully delivered “a single, unified message: Pakistan’s civilian and military leadership must join us in squeezing the Haqqani Network from both sides of the border and in closing safe havens.” She observed that the meetings were “detailed and frank” about the concrete steps both sides needed to take. “I explained that trying to distinguish between so-called good terrorists and bad terrorists is ultimately self-defeating and dangerous,” she added.

But back home, official quarters seemed more reflective than optimistic about the outcome. Nevertheless they have acknowledged that the visit helped reduce tension between the estranged allies. Background interviews conducted by Newsline show that a wide array of observers appreciate the “90-95% agreement,” but point out that the remaining five or 10% seems to hold sway over the future of US-Pak relations.

Talking to Newsline, a senior Pakistani intelligence officer, requesting anonymity, branded the recent Pak-US talks as a recognition of Pakistan’s crucial role in persuading rogue Taliban groups to come to the table. “But then the Americans have to negotiate the deal and we cannot be blamed in case they fail to woo the guerrillas,” he cautioned. The official cited the recent killings of top lieutenants of the Haqqani Network in predator strikes as the handiwork of a collaboration between the ISI and the CIA. “The recent operation by the coalition forces on the Afghan side of the border could also not have been possible without Pakistan’s help. But yes, the Haqqani question continues to be a sticking point.”

The official added that the Kayani-Pasha duo has done a good job in convincing the Americans that operational difficulties and the question of timing keep Islamabad from going into North Waziristan. In the same breath, intelligence officials at the helm in Islamabad mention the pressure felt by the forces on account of the suspended Coalition Support Fund (CSF), the basket of US funding to Pakistani forces battling militancy on its territory bordering Afghanistan. 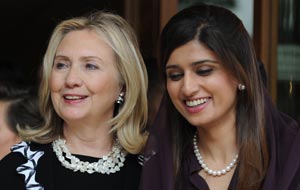 Lt-Gen (retd) Javed Ashraf Qazi, the former head of the ISI, says the US has failed to keep its side of the bargain and did not provide the promised military hardware or timely assistance under the CSF. “This cannot be a one-sided affair. The military high command told the visiting Americans very clearly that we cannot sacrifice our strategic interests for the US,” the retired general asserted, adding that Islamabad is not too keen on seeking US assistance anymore and this policy position would significantly reduce American leverage.

But the US diplomats view Secretary Clinton’s visit as a definite marching on from the recent standstill. Newsline requested comments from a senior US official in Pakistan, who agreed to talk on the condition of anonymity, saying he was not allowed to comment officially. “The secretary’s visit was very positive in terms of the message delivered to the public, a unified message from the US government. We are now looking forward to the gains from the visit to feed upcoming conferences in Istanbul and Bonn,” the senior diplomat observed.

He claimed that the roundtables held in Islamabad went well and the Secretary’s ‘subjective’ meetings were much more positive, enabling her to get the message out. “Positions were frankly discussed and steered relations away from the brink of the crisis. And the Secretary did affirm in her meetings with Pakistani politicians that US support for the civilian set-up will continue.”

Riaz Khokar, a former ambassador to the US, termed the present thaw in relations as a breather. “It shows the US is now at least showing some interest in talking to the Haqqani group, and more recently with the Taliban shura, led by Mulla Omar.” Khokhar added that Pakistan’s internal compulsions would impact its foreign policy choices. “That is why we need to think rationally, and that may necessitate taking unpopular decisions if doing so serves the national interest.”

Another former ambassador, B.A. Malik, put this rather bluntly. “Our preoccupation with Afghanistan as strategic depth has become strategic death,” he lamented. The retired diplomat asserted that Pakistan has historically always given in to US pressure and history will repeat itself this time around too. “What Ã­s really worrisome is that Americans now consider us a part of the problem rather than the solution. And we have to guard against the jihadi elements in our midst, ready to exploit any strain in relations.”

Salim Saifullah, a member of PML-Q (Likeminded Group) said political and military quarters were on the same page on the question of US-Pak relations. “Both the countries are now tired of going back and forth on the Af-Pak issue. There is no choice but to agree to a common strategy in the interest of the region and our own.” The former federal minister Qamar Zaman Kaira also drummed up the recently held All Parties Conference (APC) on national security and termed it a shared vision with inputs from civilian and military elements of the state.

While Islamabad and Washington live to live another day, it seems more obvious than ever that agreeing to a common script on the future of Afghanistan in the wake of the US drawdown will continue to hold sway over this crucial partnership against terror. Diplomatic observers say Islamabad needs to tread a clear path at this crucial stage as this is the only antidote to mistrust and deception. Or else it would be easy to lose one’s collective vision in the blitz of info-wars and PsyOps designed to prey on divergences.

This article first appeared in the November 2011 issue of Newsline under the headline “On the Same Page?”