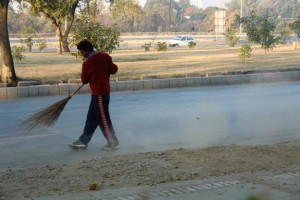 “Yesterday I was a sweeper, today my sons are sweepers and tomorrow my grandsons will do the same job. Nothing changes, our people will live and die sweeping,” says 76-year-old Iqbal, entrapped in a vicious circle of poverty faced by Christian sweepers all over Pakistan. Though exact facts and figures are not available, it is commonly believed that a substantial proportion of the more than three-million Christian population in Pakistan is engaged in public (for the municipal government) or private sector sanitation (in homes, private offices or for private waste companies). Conversations with male and female sweepers in a Christian neighbourhood on the outskirts of Lahore shed some light on the hardships this group experiences.

In mainstream discourse, ‘Christian,’ ‘sweeper’ and the derogatory term ‘choohra’ are used interchangeably. Few are inclined to try to understand the historical context of how such a large proportion of this minority are in sanitation-related jobs. Sweeping in pre-Partition India was a job reserved for the lower castes. A large segment of lower Indian castes converted to Christianity after 1850, under British rule, to improve their lives. The British, too, callously utilised caste differences in the interests of convenience, economy and efficiency deriving from the needs of an urban government. This colonial legacy inherited by the local government of Pakistan, remains in practice to date. In fact, after Partition even greater numbers of Christians were drawn to this profession; several landless Christian agricultural labourers who migrated to Pakistan took up the task of sweeping in large cities in order to survive. Shahzad painted houses for a living but had to quit because of the reluctance of Muslims to allow a Christian into their homes. Today, he is a sweeper and says that as a Christian it is easier to find a job as a sanitation worker. Defeated, he states, “For centuries our forefathers had no choice but to sweep, so why should I expect to lead a life that is any different?”

Christian sweepers are discriminated against both by Muslims and by fellow Christians engaged in other professions. “Since our work is considered unclean, people tend to look down upon us. They treat us like animals,” says Sohail. “People do not like to speak with us, they refuse to shake our hands and they do not even eat from the same plate as us. Even some of our other Christian brethren look down on us,” Sarfraz adds. This stigma has been tempered to some extent by the fact that public sector sanitation constitutes a lucrative source of income and sanitary workers in Pakistan enjoy a number of fringe benefits that include a subsidised education for their children, a marriage grant and a pension upon retirement. However, this too is becoming a thing of the past.

Unemployed Muslims are now willing to take up jobs as sweepers and this enrages some Christians who view sweeping opportunities in the public sector as their birthright. This itself is an unfortunate reflection of their limited mobility between occupations. Zafar’s anger is apparent. “Who do these Muslims think they are? These jobs have been ours for as long as we can remember. They do not belong here.” Poor Muslims entering this profession pose stiff competition. For example, in May 2010, union heads complained that the City District Government Lahore inducted 3,000 Muslims illegally on seats reserved for Christians in public sector sanitation. “At least we Christians are guaranteed sweeping jobs in the government, now even these jobs are contested for, and presently, not only do we not have any honour, we also have no hope to earn enough money,” laments Munir. Individuals who are laid off are forced to enter private sector sanitation where wages are significantly lower and benefits non-existent.

The increasingly neo-liberal stance of the Punjab government in privatising waste management in some parts of the city is also recognised as a serious threat by Christian sweepers. The private sector’s engagement in Solid Waste Management began in the 1990s, whereby the privatisation of sanitation is rationalised on the basis of several factors, such as the costliness of the municipality running the operation, high labour costs, the inefficiency of poorly supervised workers and the high visibility and interference of labour unions constantly bargaining for material benefits for municipality waste workers. It is the livelihoods of the sweepers, however, that are collateral damage in the process. With solid waste management sourced out to private firms, Christian sweepers are relegated to the status of temporary workers hired on a non-contractual basis for low wages — on half the salary of public sector sweepers with no benefits. Arshad highlights the no-win situation in which sweepers find themselves. “The government is anti-Christian. First they condemn us to work as sweepers and then they privatise sanitation so we can’t even keep these wretched jobs,” he says.

Christian sweepers are, therefore, in a precarious position. Already inflation was the greatest concern among those interviewed. Rent and soaring commodity prices on staple items such as sugar, flour and pulses are difficult for these people to manage, and to make matters worse, they have no one to turn to. Government safety nets have failed to protect them; the interviewees filled out forms for the Benazir Income Support Programme but not a single one was selected as a recipient. “Poor Muslims at least have the Zakat fund for economic relief, poor Christians have no such fund,” points out Hanifa, a female sanitation worker. Christian sweepers consequently turn to family members, neighbours, memberships in credit committees and to local churches for assistance. These networks, however, provide little relief and in order to understand why, a deeper appreciation of the cultural dimension of poverty amongst the Christians is required.

It is well-documented that the stigmatisation of Christian sweepers is to blame for the distinct residential patterns of this group. Christian sweepers tend to reside collectively and exclusively with other Christian sweepers in bastis — a trend confirmed in the neighbourhood where this research was conducted. “This is a sweeper neighbourhood. Our parents told us it is better to stick with our own people. I have always lived in areas where only Christians live and, that too, mostly sweepers. Why would we want to live with people who don’t respect us?” says Aasia bibi.

This has huge implications for the efficacy of their informal social networks. In development literature, it has been noted that the poor strategise about relationships to invest in by taking two important factors into consideration: time and money. As a result, they tend to form bonds and participate in social networks where membership does not entail travelling long distances and consequently overspending on transportation. This means that they lead “place-based” lives and sustain ties to those closest to them in terms of physical proximity.

Christian sanitation workers, similarly, tend to invest in relationships with those living close by, invariably other Christian sweepers residing in the same neighbourhood. Given the fact that this group as a whole is experiencing job insecurity and income shocks simultaneously, their ability to help one another in an individual capacity is next to impossible. So while their deteriorating economic position causes their heightened dependency on social networks in the first place, it simultaneously renders these same social networks fragile resource centres.

The local churches are an interesting example of this. On the one hand, inflation and loss of income have forced more and more Christian sweepers to approach their own small churches for monetary help, on the other hand, these very factors render these neighbourhood churches impotent, by constraining congregation members from giving money in the form of chanda or as donations towards the communal fund.

The case of Christian sweepers highlights a number of contentious issues. Many Christians, by virtue of being Christian, feel they are left with no choice but to work as sweepers. In many cases, this occupation is inherited inter-generationally. The prerogative lies with the government to reintegrate Pakistan’s Christians into mainstream society and to facilitate their entry into professions of their choice. However, at the same time, perhaps contradictorily, the livelihoods of Christian sweepers need to be preserved. The media can play a positive part in highlighting the downside of privatisation in the local context and greater coverage can be accorded to protests held by sweeper unions. As far as bettering the lives of this important sub-section of the Christian community is concerned, the media should play a fundamental role in running public service messages aimed at wiping out the commonly used offensive term ‘choohra’ from the public lexicon. After all, proper respect should be given to sweepers who perform the indispensable task of keeping our country clean.

This article was originally published in the November 2011 issue of Newsline under the headline “On the Fringe.”