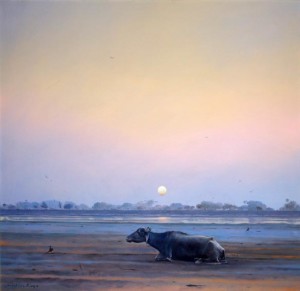 After a year’s hiatus, Lahore-based landscape artist Mughees Riaz returned to Karachi with a solo exhibition at Canvas Gallery (October 18-27). On display were a collection of gentle, dreamy sunset landscapes, as well as an additional new portfolio of the human figure in multiple poses, conjoined with clay pots — which he describes as symbolic of the times we live in — consequently calling his new collection From Pottery to Poetry.

Riaz’s oeuvre is found in the muted shades of his landscapes, delineated specifically at sunset, his favourite subject and inspiration: that time of day recorded each time at a special spot on the embankment of the River Ravi, just beyond Shahdarah. For those familiar with the topography and seasons of the Punjab, Riaz captures the quintessential light of the Ravi sunset, in muted pastel tones of mauve, peach and white. 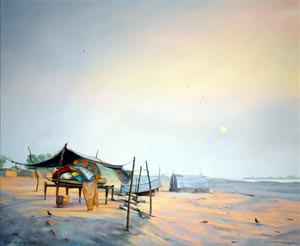 In several of his landscapes, the earth appears in muddy shades of ginger and brown, strikingly different from the hushed, chalky colours of the surrounding sky and water. Yet, in his compositions it is the reflective quality of the sky and water which creates a vast breadth of light and space, positioning the viewer to take pleasure in the all-encompassing luminous quality of the firmament matching the reflective quality of the water below, rather than just focusing on a particular object or objects delineated in the canvas.

The objects that feature repeatedly in his landscapes are crows, buffaloes, a dog, cat and pigeon, ducks, boats, and make-shift patchwork huts. Riaz describes these species and objects as regular elements in the environment he is familiar with: the landscape of the Punjabi river embankment. However, the crow and dog he transplants to his figures portfolio, adding an additional creature, the chicken (the artist refers to it as murghi) which perches triumphantly on a still human figure. Riaz’s preoccupation with crows is evident in its continuous appearance in all of his works: he believes it is a creature that survives the vagaries of life and is always with the human wherever he goes. The ordinary, mundane, everyday crow supplants itself in various landscapes and situations as a voyeur of the human condition.

Riaz’s departure into defining the human figure is explained by the artist as a conscious attempt on his part to present the world’s current reality beset with terrorism, leading to insecurity. The garha or traditional pottery urn that appears with the figure in the painting called ‘Figure Having the Clay Pots,’ symbolises life, states the artist. Therefore, the pottery element adjacent to the human figure is an emblem of optimism whereas the condition of the still, sitting figure represents human insecurity, urgently holding on to life. 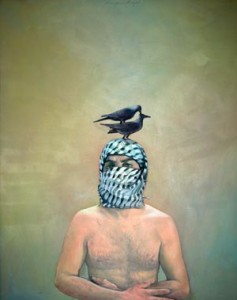 The human bodies that appear in Riaz’s painting are motionless, like clay figures themselves, and with similar elemental properties like the clay pots that inhabit their space. The colour of the man’s skin is akin to the pots that he sits on, the hues of skin and clay blend into each other, as if they are from each other, giving credence to the fact that man is originally created from dust and clay. In ‘Figure with Pigeon’ the shape of the pottery urn and the curves of the man’s body have similar contours.

The stillness of the figures is symbolic of man’s helplessness in modern times — the perched crows and chicken on his body confirm that fact, as no bird will rest easy on an active human being. Riaz’s work alludes to the condition that his country finds itself in, where extremism, sectarian violence, suicide bombings, drone strikes and target killings have rendered its populace helpless. His still figures symbolise death — juxtaposed dramatically with the pottery urns that allude to the opposite — the omnipresent cycle of hope and life. The work titled ‘Begging’ depicts a human figure crouched in supplication, with extended arms holding a pottery bowl, with a chicken, or murghi, perched on its back. Riaz points out that the canvas is a comment on his countrymen who slaughter chickens without hesitation, confirming a sad fact that violence may be a part of their nature, and therefore a precursor to other sordid acts of terrorism. 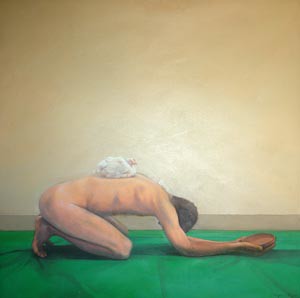 These additions to Riaz’s portfolio confirm the artist’s sensitivity to the negative commotion in his surroundings. His departure from his landscapes is not entire, as several elements in the form of animals and birds enter the realm of his figurative reality. Riaz’s landscapes, however, continue to confirm that as a landscape artist he is in the same elite assembly as Punjab’s foremost landscape painters: his mentor Khalid Iqbal, Ijaz ul Hasan, Kaleem Iqbal and Shahid Jalal.

Riaz believes that an adequate amount of time and commitment is required to create a landscape; the space and its coordinates must be internalised by the artist completely. His landscapes, he states, are endeavours of constant struggle, slow and gradual achievements, defining his commitment to the genre of pure landscape art.

This art review originally appeared in the November 2011 issue of Newsline under the headline “Beyond the Vista.”