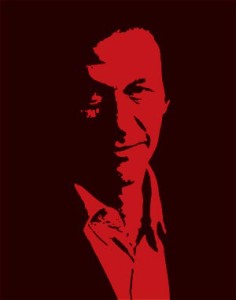 @m_waqast: Join PTI Join For Change and Save Pakistan. Give one chance to Imran Khan.

@Adeel_Asghar_: ITS TIME TO WAKE UP!! Join Imran Khan at Minar-e-Pakistan, Lahore on October 30 for a historic Jalsa. #SavePakistan @PTIofficial

These are just a few of the tweets in support of Imran Khan who has more than 100,000 followers on the social networking site Twitter, whereas most other politicians don’t even have a tenth of that following. And, unsurprisingly, most of the cricketer’s followers are under the age of 30. The question is, will these young Twitteratis translate into active campaigners, demonstrators and voters? Will they herald a new spring in Pakistan as the young did in Egypt, Yemen and Libya?

“A cyber-revolution is impossible here. This isn’t Egypt or Tunisia,” says Arsalan Taj Ghumman, president of the Insaf Student Federation (ISF) and a member of the PTI web team, pointing out Pakistan’s abysmal literacy rate and low percentage of Internet users. He continues, “The Internet and social media are marketing tools and not much more.” Hassaan Bashir, a graduate of the Aga Khan University who recently joined the PTI, is relatively more optimistic. Referring to claims that Imran Khan’s support only comes from the digital world, Hassaan states, “So what? Every one of those Facebook and Twitter accounts translate into a Pakistani who wants to see a change in Pakistani politics.”

These two young members might have different thoughts on social media’s role in the Pakistani political landscape. But Karachi alone has over 4,000 registered student members of the PTI and while the party might not be the strongest on the ground, it is a force to be reckoned with in the virtual world. A quick search of Pakistani politicians on Facebook reveals that membership rates of pro-Imran Khan pages can only be rivalled by the popularity of anti-Zardari pages. Although by no means an accurate gauge of a politician’s popularity, this does give considerable insight on what young, Internet-savvy Pakistanis make of our politicians.

But do Imran Khan’s successes in cricket and philanthropy qualify him as a political leader? Are young people simply bowled over by his charisma and star power?

Arsalan is quick to point out that he was not even born when Imran Khan was at the height of his cricketing career whereas Hassaan believes that Imran Khan’s success in the cricketing and philanthropic world show “that when he puts his mind to something, he gets it done.” But the main reason forwarded by young people for supporting Imran Khan has little to do with the 1992 World Cup or Shaukat Khanum Hospital. A recent graduate from Ohio State University and an active member of the ISF, Imran Ghazali says, “Politicians such as Nawaz Sharif have been tested twice but there have been no changes. I find it amazing that people worship the Bhuttos in interior Sindh even though when you visit, you see there is no education or development in the area.” Major political parties in the country often use the images of their past or exiled leaders to appeal to their voters. While this may appeal to the loyalists, references to BB or Altaf Bhai might be off-putting for people who associate these names with corruption and violence. The PTI has a clean, or rather an empty, record that appeals to those that do not yet identify with the more established parties. However, Imran Khan is also guilty of riding on other leaders’ coat tails. In his campaign material, he strategically places himself next to the images of Iqbal and Jinnah, thereby appealing to the idealistic lot in the country and creating a cult of personality. “I see Iqbal’s vision in the party ideology,” says Arsalan. But both he and Imran firmly state that their loyalty is to the party ideology and that if Imran Khan strays from it, they would no longer follow him. 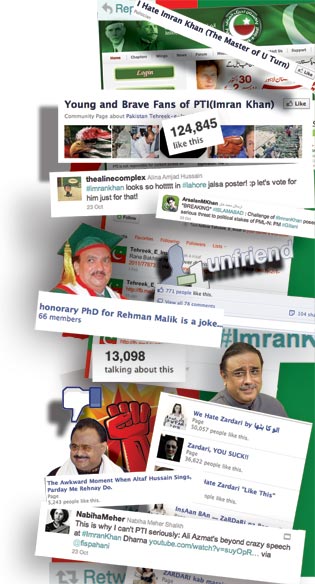 , the members joke about the Pakistani viral music video “Aalu Anday” in which the PTI is referred to as the good-looking version of Jamaat-i-Islami. Imran then immediately states that their chairman was one of the first people to call Salmaan Taseer’s assassin a murderer. Arsalan also refers to the November 2007 incident in which Jamaat-i-Islami youth members had Imran Khan arrested by the police when he visited their stronghold, Punjab University. “Would they do that if the two parties were that close?” The rest they dismiss simply as false accusations.

These young members are pinning all their hopes on what, to the public, looks like a one-man show. But the student members are the ones going to private educational institutions for voter registration drives. “We don’t care who you vote for. But you have to vote,” says Arsalan. Hassaan reveals, “I was eligible to vote six years ago but I didn’t know how to. The party’s website had instructions in English which I used to finally register myself as a voter.” Such efforts are laudable and appeal specifically to the younger generation. There have also been minor breakthroughs for the party in the form of the highly attended sit-in against drones that was held in Karachi in July this year. Arsalan describes the event as a major highlight of his experience with the PTI, “The feeling was indescribable. People said Karachiites never come out on the streets but that day they did.” And while Arsalan was dismissive of any hopes of a cyber revolution in this country, he recognises the significant role of SMS to disseminate information and to organise themselves.

The idealism of Imran Khan’s young supporters is reminiscent of Obama’s youth following during his 2007-8 political campaign. American university students proudly wore T-shirts emblazoned with his face and rallied behind his “Yes, we can” slogan. Obama made innovative use of social media in his campaign, and his following on Twitter and MySpace far exceeded that of his opponent McCain. The Obama team actively courted young voters and many analysts believe that this strategy was a key factor in his win.

Back here in Pakistan, the students’ desire for change and their sense of frustration are tangible. But this adds tremendous pressure on Imran Khan and his party to deliver on their promises — otherwise these young hopefuls might just go on to become the country’s next biggest cynics.

This article is part of a larger story on the surging popularity of Imran Khan and originally appeared in the November 2011 issue of Newsline under the headline “Connecting the Youth.”