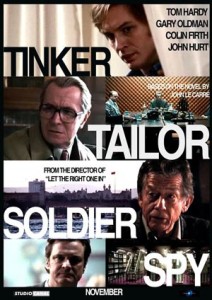 While winning an Oscar may not be the be-all and end-all of an actor’s experience, it’s still surprising that Gary Oldman has never been nominated for the coveted prize. His latest, a spy thriller, Tinker, Tailor, Soldier, Spy, might bring an end to that drought. Oldman plays George Smiley, a spy who is forced out of retirement to hunt out a mole at the MI6, the British Secret Service. This mole, placed strategically by Moscow, is working for the Soviets and is possibly someone from the ‘Circus’ — the highest echelons of British espionage hierarchy — and possibly someone George Smiley may know very well.

Based on John le CarrÃ©’s bestselling novel of 1974, this film is masterfully directed by Tomas Alfredson whose previous film Let the Right One In (2008) is a classic in its own right. Even though one might be familiar with the story and ending of Tinker, Tailor, Soldier, Spy (the film follows a 1979 BBC TV drama of the same name, in which Smiley was immortalised by Sir Alec Guiness; or one may have read the book) the suspense of the story is held throughout. One can criticise the film for being slightly slow paced, but that is the requirement of the narrative. The screenplay by Peter Straughan is engaging and the realistic settings are very well depicted.

Tinker, Tailor, Soldier, Spy has several great moments but two scenes stand out in particular. The first one may take you completely by surprise; it is the only time in the entire film when veteran spy George Smiley raises his voice — at the precise moment when he stands opposite the exposed mole. Smiley, normally a methodical and silent spy who goes about his business calmly, surprises us with the way he loses his temper, exposing himself for just a short, simmering moment.

The second scene is towards the end of the film, during an MI6 party in flashback, where agent Jim Prideaux (Mark Strong) shares a glance with the Soviet mole, whose true identity has finally been revealed. Prideaux’s gaze seems to suggest that he ‘knows,’ since they are best friends, after all. In turn, the mole’s smile acknowledges his decision to take the ‘wrong side,’ reflecting how loyalties changed course during the bleak days of the Cold War. This subtle but symbolic exchange summarises several themes that the film chooses to portray — loyalty, betrayal and guilt to name a few.

The movie has a dream ensemble of British actors, each one of whom shines in their respective roles. Gary Oldman renders Smiley as adeptly as Alec Guiness did 30 years ago — he is exceptional as the spy. The rest of the cast, including Toby Jones as Tinker, Colin Firth as Tailor and Ciaran Hinds as Soldier, are equally competent.

Tinker, Tailor, Soldier, Spy is beautifully crafted and is both engaging and entertaining in equal measures. It should rank among the top tier of successful films produced in the year so far.

This movie review first appeared in the November 2011 issue of Newsline under the headline “Class Act.”