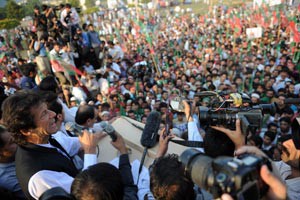 They started as a trickle, coming through the narrow gates in an orderly fashion. Youngsters with flags, women sporting Gucci shades, men with PTI headbands and teenagers doing a bhangra. At mid afternoon, the huge venue at Minar-e-Pakistan was a quarter full. By sunset, it was packed. And then the crowds began to spill over beyond the parameters, and onto the roads.

When Imran Khan came to the rostrum, amid deafening cheers and blaring music, the atmosphere was electrifying. Comparisons with the PML-N rally were passÃ©; the question being asked was when was the last time Lahore had seen such a massive jalsa?

By all standards, Imran Khan had pulled off a successful event. Even his party members were taken aback by the numbers. “How many people do you think are here,” asked an excited youngster waving a PTI flag. “Must be more than five lakhs!”

This was clearly an exaggeration, but it did reflect the optimism pervading the jalsa. Two days earlier, a PTI office holder had said they were hoping for a turnout of about a hundred thousand. Most people agreed that this number had been surpassed at the rally.

In many respects, the PTI Lahore jalsa broke with traditions. Twenty thousand chairs were placed in neat rows for the participants. Not a single one was left unoccupied. Women came in large numbers, and many families were seen accompanied by children.

In his speech, Imran spelt out some of the measures he intended to undertake if he came to power. This included doing away with the outmoded patwari system, making the position of a thana incharge an elected office and ensuring all politicians declare their assets. These may be dismissed as campaign promises, but at the jalsa, they elicited rapturous applause.

However the bigger question is, can Imran Khan cash in the political capital that he accumulated from his massive jalsa? Can he transform crowds into votes? And can these votes fall in a pattern that can win seats? For this to happen, Imran still has a lot of work to do. But after the rally, the task has become a tad easier. For starters, the political fence-sitters will now find the PTI very tempting. Secondly, PML-N will now be forced to come out of their denial mode and take the Imran threat very seriously. Third, PPP will also be looking over its shoulder, knowing well that the PML-N is not the only party which is feeling the heat from the PTI. And lastly, Imran’s party machinery and his base will be galvanized like never before. They now have the momentum on their side.

The campaign for the next election just became a little more exciting.