By Tariq Rahman | Published 9 years ago 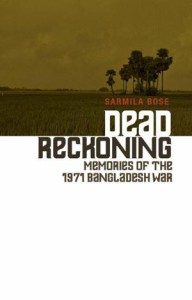 New Genocide Facts
The year 1971 is etched in the collective consciousness of Bangladeshis, Pakistanis and Indians — though to a lesser degree — as a time of tragedy and upheaval. For Bangladeshis it is the year of blood and tears, for Pakistanis deep humiliation, and for the Indians of triumph. And though memories come in simplistic categories, the reality is very complex. Sarmila Bose, a well known name in both academia and media, undertakes to unravel some of these complexities in her book Dead Reckoning: Memories of the 1971 Bangladesh War.

There is a lot of literature on 1971 but, understandably enough, very little of it comes from Pakistan. Hassan Zaheer’s book entitled The Separation of East Pakistan (1994) and Kamal Matinuddin’s Tragedy of Errors (1993), though certainly commendable in part, are written from a Pakistani perspective and do not mention the suffering of Bengalis adequately. And, of course, General A.A.K. Niazi’s The Betrayal of East Pakistan (1998) is meant to defend him against the charge of having lost the war to India.

The liberation literature in Bangladesh, the author points out, rests upon the perception of ‘victimhood’ to the point of denying resistance from Bengali armed fighters at places. Moreover, it exaggerates the killings and rapes without quoting reliable sources. The literature from India — mostly accounts of military officers — focuses on the 1971 war without taking account of the role of India in East Bengal from March 1971 onwards. It, too, misses out both on the perspectives of the Bengalis as well as the West Pakistanis.

Bose adds to this existing scholarship with her meticulous research. Besides taking account of written sources in Bengali and English (including reports, documents, biographies, memoirs) she has interviewed eyewitnesses and participants in Bangladesh, Pakistan and India. These people have deepened her understanding of the events while earlier accounts relied on hearsay, testimony or rumours.

Bose argues that the period between the beginning until March 25 was a time of inaction­­­ — “power without responsibility.” The Pakistan army did nothing to prevent the killing of Biharis and West Pakistanis by Bengalis which was going on. On the night between March 25 and 26, the Army took action beginning from Dhaka University where people, including students and professors, were killed. Then, the army fanned out all over Bangladesh ‘securing’ the countryside (Chapter 5), mainly by killing men. Although Bengali young men (and some women too) had been undertaking some form of military training at least from March, they started crossing over to India in large numbers after the military action. The Mukti Bahini was organised and trained in India and moved in for ‘hit-and-run’ actions in Bangladesh (Chapter 7), though most of these ended in torture and death for the perpetrators. Right at the end of the war, a number of Bengali intellectuals were killed, probably by members of the Al-Badr organisation, which was pro-Pakistan.

The outline of this story is known to anyone who has read the fairly vast archive of writings on 1971. Even if one has read the biographies and memories of participants in English, it becomes clear that Bose’s analysis of events is correct. But her real contribution to scholarship is that she demolishes a number of myths that surround the events of that fateful year. For instance, she argues that the number of Bangladeshis killed in 1971 was not three million but between 50,000-100,000 (p.181). She also contends that the soldiers taken as prisoners of war were not 93,000 (as believed in Pakistan too), but 45,000 including police and civil armed forces personnel. She also points out that the references in Bangladesh sources to the Balochis being kinder than the Punjabis are based on some misperception. The Pakistan Army probably had no ethnic Baloch and Brahvis, though there were Pakhtuns from Balochistan. It is possible that Baloch regiments, which had Punjabis and Pakhtuns like other regiments, were mistaken for being ethnically Baloch.

Since Bose’s correction of exaggerations and countering of myths tilts in favour of the Pakistan army, it might be assumed that she is unduly sympathetic towards Pakistan. The fact is that she is objective and, like all good research scholars, relies on eyewitness testimony corroborated by other sources. Such high standards of evidence obviously refute myths to which all non-scientific people cling to in all countries — not just in Bangladesh or Pakistan.

As proof that the author is even-handed, it should be pointed out that she has narrated stories of how the Pakistan army did kill civilians. The Dhaka University massacre is mentioned among other incidents of a similar nature: Shankhariara on March 26, Thanapara on April 13, Chuknagar on May 20, Boroitola on October 13 — to mention only the better-known ones. Moreover, the army went out of its way to kill Hindus on the mistaken assumption that they were Indian agents. All these the author has described; however, she does not seem to have investigated cases of rape and arson, whereas there is biographical evidence that those also took place. As in other cases, she should have taken a clear position on these two issues as well.

Omissions, myths and exaggerations aside, it becomes quite evident that the ruling elite of Pakistan — which was the military at that time — did not understand the force of public opinion against it. Military action was not the correct response to the imperatives of Bengali nationalism that was the result of 20 years of perceived injustice and discrimination. In this context, Bose’s assertion that “42% voted in favour of the Awami League cannot be interpreted as a vote for secession” (p.171), needs to be questioned. Because, if numbers are the criterion, then the creation of Pakistan as well as that of a number of other states in the modern world, would also be called into question. Given the state of indifference to politics among some sections of society, a reluctance to vote among the well-to-do led to genuine confusion; it so happens that sentiments do not necessarily translate into votes. The alienation of the Bengalis from Pakistan was certainly pervasive and, if the ruling elite had been humane and wise, a political solution — based on the acceptance of the six points or freedom — would have been the preferred solution. Bose is not critical enough of the ruling elite as far as this is concerned. She may be right in mentioning that the rank and file from West Pakistan thought they were doing their nationalistic duty — though brutality is never part of any such duty — but surely the intellectuals and the ruling elite ought to know better.

While atrocities from all sides are to be regretted and condemned, it is the function of the state not to allow them to take place. Thus, it is the military government of Pakistan who should have stopped Bengalis from killing Biharis, and the army from killing Bengalis. It is only by acknowledging this and seeking pardon from the families of the dead that Pakistan can make partial atonement for the events of 1971.

Despite my minor disagreements with Sarmila Bose, I consider her book by far the best account of 1971, so far. It should, perhaps, have been more sympathetic to the Bangladeshis, but in her desire to be objective and demolish myths, she may be seen to be less sympathetic to their suffering. This, however, is a matter of tone and not of scholarship. Indeed, her greatest asset is her ability to be fair, objective and impartial and, like a true scholar, rely only on solid evidence. The book is also eminently readable. For all these qualities the book is recommended strongly to scholars of South Asia and the interested layperson alike. It is a milestone in South Asian studies, which will remain required reading for quite some time to come.

This book review originally appeared in the November issue of Newsline under the headline “New Genocide Facts.”