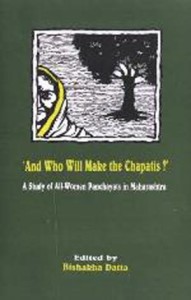 And Who Will Make the Chapatis? is a slim readable book that documents and critically analyses the experiences of 12 all-women panchayats that came to power in Maharashtra, India well before the 73rd Constitutional Amendment in 1992. Largely a qualitative study, it looks at women belonging to the lowest level of Panchayati Raj. Using an interview-based research method, it includes field reports by Meenakshi Shedde, Sonali Sathaye, Sharmila Joshi and Bishakha Datta, who is also the book’s editor. Although first published in 1998 and reprinted subsequntly, the book is relevant, given our own experience with the local government system and female councillors — which for now seems to have been shelved.

Panchayati Raj — the formal system of local self-government in India — came into being after Independence and many states set up Panchayati Raj bodies at village and district levels in the late `50s. The book details the struggle of Indian rural women to make political space for themselves and place their issues, needs and priorities on the political agenda of the country. Although women constitute 50% of the world’s population, only 3.5% of the cabinet ministers globally are women. In previous elections, Indian politics remained a male-dominated sphere with only three women contesting for every 100 male contestants — clearly, women then remained under-represented at all levels of politics. Despite the recommendations of the Committee on the Status of Women in India and the Declaration of the World Conference on Women in Nairobi, it is only in this decade that women in politics emerged as an important issue. In 1988, a parliamentary subcommittee recommended that the Panchayati Raj institutions be given constitutional recognition. This paved the way for the 73rd Amendment, which not only provided these institutions constitutional status, but ensured 33% reserved seats for women at all levels.

The contributors have succinctly discussed the multifaceted issues confronted, ranging from the formation of panchayats to the programmes taken up by them, the patterns of participation and impact in terms of empowerment. It highlights the fact that whatever the pattern of formation of these panchayats may have been, it is clear that they could not have been formed without the support of male elders or leaders.

Another valuable aspect of the book is that it documents the experiences of the rural women, who entered the political arena to solve their issues when they felt that their needs could not be addressed by traditional political structures. It shows how these women, who managed to address issues of access to water, sanitation and fuel, etc., were completely powerless to tackle issues that challenged male authority. The book also discusses the inadequacies of these panchayats, their replication of rural power structures and patterns of dominance and inequality. The absence of corruption sets all-women panchayats apart from other panchayats and, what’s more, their choice of schemes contributes to the development of both men and women alike.

The contributors make a convincing case of asserting that illiteracy, unfamiliarity with politics and patriarchal culture are the three most critical constraints to effective participation in all-women panchayats. Although the Panchayati Raj institutions — directly or indirectly — enabled women to formally occupy positions of power, they are not seen as political entities. The author hopes that the study would “serve to voice and validate the experiences of women and contribute to the small but vital body of action research on women in rural politics.”

Though politics continues to be dominated by men, the case studies identified for the book clearly bring forward positive trends in Indian politics and would benefit women’s groups and NGOs in Pakistan currently engaged in researching, documenting and training women at the local-government level. Though the book makes for an interesting read, it lacks analysis of the constraints/difficulties identified that would help integrate women at all tiers of government.

This book review was originally published in the November 2011 issue of Newsline under the headline “The Power of Panchayats.”