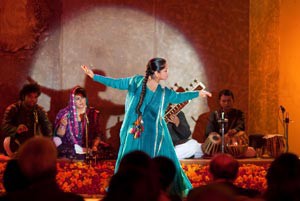 The Karachi elite and culture aficionados were treated to a mesmerising evening of classical music and dance organised by the Supporters of The Citizens’ Foundation, who must be lauded for their commitment to showcasing Pakistan’s best at their fundraising events this past decade.

The show entitled Zikr-e-Khusro, a tribute to Amir Khusro, was created and hosted by the beautifully bilingual Zia Mohyeddin, who conceived the programme to showcase the multi-faceted legacy of the 12th century Sufi mystic and poet — defining it as ‘Light upon Light.’ Amir Khusro was associated with over half-a-dozen royal empires and was a disciple of Delhi’s Hazrat Nizamuddin Auliya, the famous Sufi saint of the Chisti order. Amir Khusro wrote Persian and Urdu poetry, he created the qawwali, khayal and tarana; there are several ragas attributed to his genius, and he also invented taals, the metric cycles of classical music and dance.

The highlight of the evening was surely the peerless Naheed Siddiqui, whose art has yet to be replicated by younger dancers in Pakistan. Her mastery over the dance genre of kathak is one-of-a-kind and her tribute to Khusro that evening was nuanced with elegant footwork and superb hand movements which left the audience spellbound. Mehnaz Begum too was a wonderful treat; she sang the classic “Bahut Kathin Hai Dagar Panghat Ki” and “Goondho Ri Maalan Phoolon Ka Sehra” with an ability to transport a listener to bygone times. Ustaad Naseeruddin Saami’s rendition of Amir Khusro’s composition “Raag Ayeman” was an ultimate goosebumps moment. The renowned classical vocalist Ustad Salamat Ali, accompanied by Ustad Mubarak Ali Khan, sang “Zihal e Miskeen,” written both in Faarsi and Brij Bhasha.

The programme was also showcased sitar-nawaz Nafees Ahmed, tabla maestro Ustad Bashir Khan, Ustad Salamat Hussain on the flute and Muhammad Hussain on the harmonium. Kudos to Karachi’s NAPA alumni who accompanied the masters; their rendition of the classic qawwali “Man Kunto Maula” was well-attempted, as was Khusro’s timeless song “Chaap Tilak,” with the old and new versions sung simultaneously.

The Citizens’ Foundation’s (TCF) dedication to philanthropy and culture is a source of inspiration to all those who would like to see a Pakistan imbued with this sensibility. Presently, TCF has 102,000 children studying in 730 schools across Pakistan. Committed philanthropy and a clear vision to eradicate illiteracy across Pakistan is the winning formula for TCF’s success since its inception in 1996.

This article first appeared in the November 2011 issue of Newsline under the headline “Light Upon Light.”