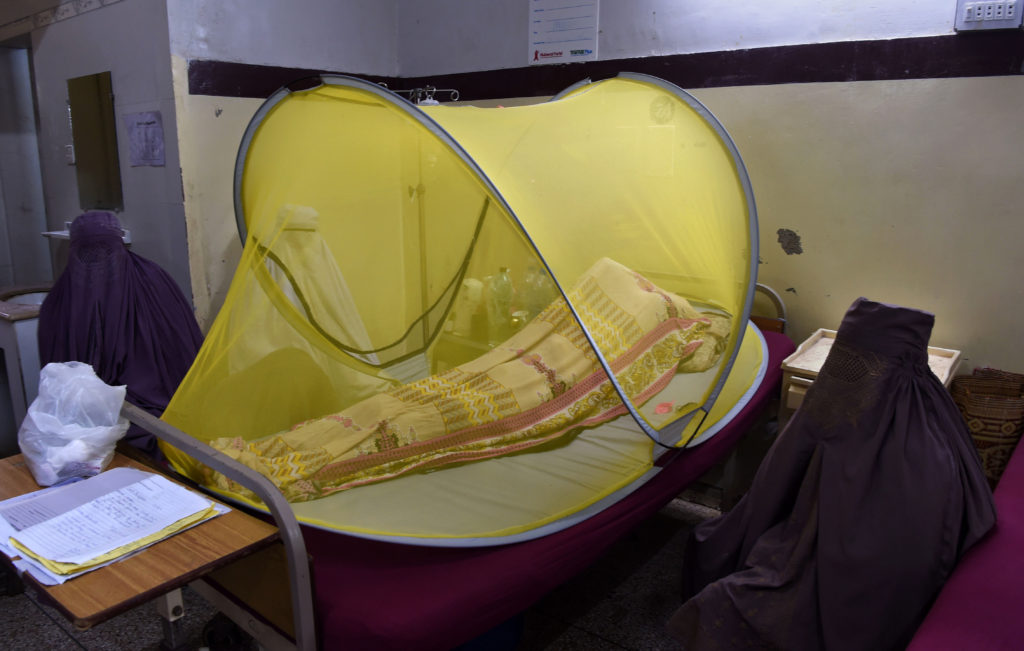 A Pakistani dengue patient rests next to relatives inside an mosquito tent on a hospital in Peshawar.

After the funeral prayers, residents of Tehkal at Gulay Baba Janazgah carry the charpoy bearing the dead body of Pervaiz Khan to the graveyard for burial. His son, a young boy with a white cap on his head, stands at the foot of the grave weeping silently. The elders in the congregation pat and hug him, and a few among them have words of advice for him. “As the eldest member of the family, you will have to take care of your siblings.”

Forty-year-old Pervaiz Khan was a car mechanic on University Road for nearly two decades. On Eid day, after the traditional qurbani in the household, he complained of fever and pain in the body, so the family admitted him to Khyber Teaching Hospital (KTH), where he was diagnosed with dengue and died a few days later. He has left behind five daughters and two sons and the burden of the entire family has fallen on 18-year-old Nauman Khan’s shoulders. “It is an irreparable loss,” says Nauman, as he wipes his tears.

Such heartbreaking scenes are a common sight in different parts of Khyber Pakhtunkhwa (KP) these days. According to the Dengue Response Unit (DRU), on September 13, four persons died due to this vector-borne disease.

Like Pervaiz Khan’s family, there were several others in the KP who were totally clueless about the preventive and curative measures to be taken for dengue — as was the provincial government, it appears. Hundreds of residents of Tehkal became victims of the disease due to the negligence of the government machinery that failed to swing into action and conduct an awareness-raising campaign in the region.

More than 80,000 people live in upper and lower Tehkal, located on University Road, part of which is adjacent to the Peshawar Cantonment boundary and the army checkpost near the US Consulate. The area has been in the news of late due to the outburst of the dengue virus — a fact that was ignored by the provincial health ministry for weeks.

Although in the last general elections, residents of the dengue-hit Tehkal voted for Pakistan Tehreek-e-Insaf (PTI) candidates, both for the provincial and the National Assembly seats, the KP government did not take the spread of the viral disease seriously enough at the initial stages.

In fact, the KP Chief Minister, Pervaiz Khattak, and the health minister were so engrossed in fighting over the distribution of powers, government jobs and development projects for their respective constituencies at that critical juncture, they spent no time worrying about dengue. The chief minister announced a dengue emergency only once the political differences between the two were settled by the party chairman in Bani Gala.

In an interesting development, Tehkal’s residents sought the help of Punjab Chief Minister, Shahbaz Sharif, through the media. The Punjab Health Minister, Khawaja Imran Nazeer, arrived with his contingent and a mobile hospital, but an angry PTI government created hurdles, accusing the Punjab government of “playing politics.”

According to the Peshawar Deputy Commissioner’s Office, 25 persons had died of dengue until September 13 this year and, 10 days later, the death toll had shot up to 34. The local Awami National Party (ANP) leader, Ibrar Khan, disputes this: “I have personally attended dozens of funerals of dengue victims in Tehkal alone, and that’s why I do not find the government statistics credible.”

Ibrar Khan’s own son is being treated for dengue at a private hospital. “There are dozens of people who don’t trust government hospitals and head to private hospitals. Where is the data on them?” he asks.

The DRU provided a detailed list of the number of screenings, the number of positive cases, the ratio of successful treatments and the number of dengue patients currently admitted in KP hospitals from the outbreak of the disease two months ago to the present day .

The first dengue case was diagnosed on June 4 this year at The Khyber Teaching Hospital (KTH) in Peshawar, and later the disease spread to the whole area. This is raising questions about PTI’s Health Reforms, Sehat Ka Insaf programme, and similar schemes. The KP chief minister declared a dengue emergency in the city hospitals, and free treatment is now being provided.

But it’s not enough. “Emergency does not mean only providing curative medicines,” says a doctor working at a government hospital. The government should run awareness campaigns, and be in constant touch with the dengue-hit region.”

Meanwhile, KTH suffers from a shortage of doctors. Dengue patients need hourly monitoring, and it is not possible for a few doctors to handle the 250 plus dengue patients admitted in different wards.

While the KP government has done a commendable job in providing curative services, it failed to mobilise the community at the preventive level, which is more important in communicable diseases. Unfortunately, in Tehkal a dengue patient lives and sleeps in the same room or hujra as the other family members, thus increasing the risk of transferring this vector-borne ailment to them. And this issue needs to be addressed.

PTI MPA, Qurban Ali’s brother also fell victim to dengue in district Nowshehra. A few doctors and nurses were also infected by the virus in KTH.

“Due to the ill-planning of the government, this endemic disease has become an epidemic,” says PTI District Member, Khalil.

However, Dr Iftikhar Ud Din, assistant professor at Bacha Khan Medical College, who presently works in the DRU and was also part of the anti-dengue campaign in Swat three years ago, differs. “Dengue would have spread to the whole of Peshawar if the government had not acted promptly,” he says. “The fact that we managed to confine the dengue virus only to Tehkal and the gradual decrease in the number of cases is a measure of the success of the provincial government,” he says.

But the statistics received from DRU tell a different tale. The number of positive cases is increasing rapidly (see box 2).

After the outbreak of the dengue fever in Tehkal, the World Health Organisation (WHO) conducted a quick survey in the area to find out the cause of the spread of the dengue virus. Open water tanks, stagnant water in gallons, old tyres etc lying in more than 120 mechanic workshops in the Tehkal area, plus an assortment of old stuff lying in furniture shops, were found to be the breeding ground of the dengue mosquito and the main reason behind the spread of the epidemic.

Unless the KP government aggressively addresses the preventive measures issue, the dengue virus will continue to play havoc in the province. And given the shortage of doctors, more deaths are likely to occur.

Currently, the government has engaged dozens of teams to fumigate the area and spread awareness among the people in different localities. About 600 workers, along with 41 entomologists, are operating in different areas to deal with this epidemic.