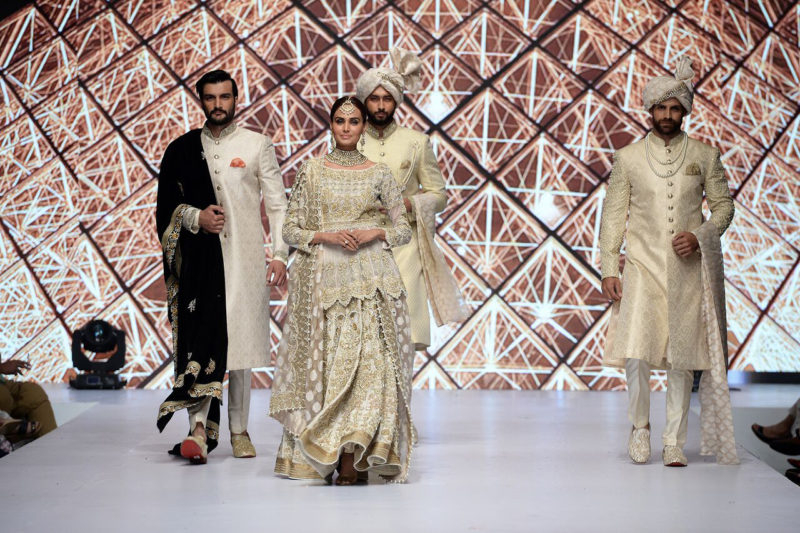 Planning and executing a seasonal Fashion Week in Pakistan is indubitably challenging. With a not always encouraging, hawk-eye “fashion press,” over-ambitious and expectant sponsors, and the bottom line, reticent designers, who often have to be coaxed, badgered and pulled by their tunic hems into participating, makes the task even more uphill. 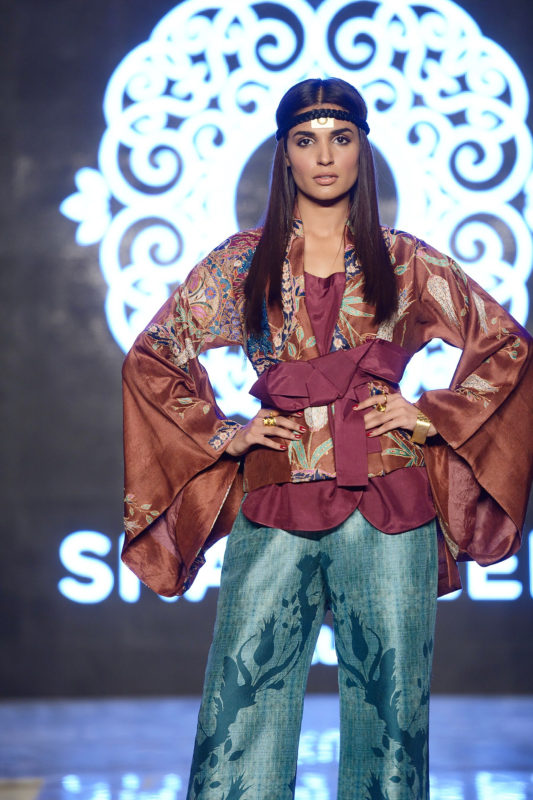 The Fashion Pakistan Council (FPC) has seen its share of drama with a bevy of designers holding directorial posts leaving before their tenure ends, under a general cloud of dissonance. One of the positive recent changes within the Council has been the appointment of its new CEO, Feri Rawanian, who is not affiliated with the designer community but has been associated with international fashion industries since 1992, as part of Quincy Acme; Linmaker International (HK) Limited and PPR, the parent company of Gucci, YSL and Bottega Veneta.

Promising to “take baby steps” with the FPC, one of the initiatives decided with Chairperson Deepak Perwani has been to continue the ‘FPW Winter Festive Fashion Week’ as a timely and business-generating affair that offers fashion designers — most of whom garner the majority of their incomes from bridal and formal party wear — an opportunity to project and present their trends for winter 2017, take orders and deliver them at the height of December’s party and wedding season, with a few designers like Adnan Pardesy and Aamna Aqeel taking advantage of the FPC-initiated “runway to retail exercise,” and stocking their collections at multi-label boutique Ensemble the very next day.

The FPW Winter Festive Fashion Week 2017 that took place September 12 — 14, encouragingly found a new locale in Karachi — the expansive, albeit circuitous, and one must add, not most security- friendly Global Marquee, replete with its unusual two-headed catwalk, that obfuscated the front row, allowing not even its “frowers” to see the full expanse of the catwalk or the audience sitting around it. The venue compensated however, with large screens, that formed a dramatically thematic backdrop to the runway. In the future, for guests’ general safety, more heed must be paid to who is allowed to enter the premises, as there were myriad cases of ‘invitation fraud,’ and access to the site was almost too easy. 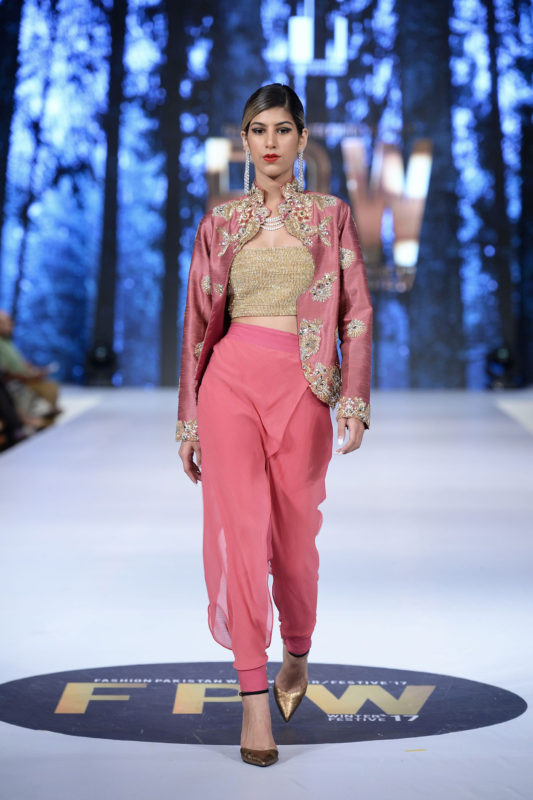 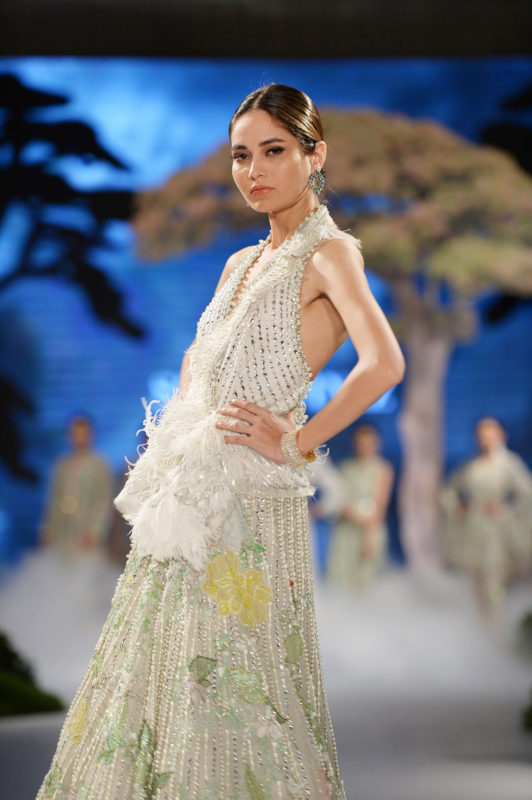 Similar to Fashion Weeks, notably in London and New York where solo shows are sometimes held in obscure garages, warehouses and the ilk, the week’s opening and closing shows — by Shamaeel, with her 35-piece ‘The Blue Tulip curatorial collection,’ which hearkened to her enduring romance with Turkey, and Sana Safinaz, with their gorgeous haute couture 65-piece ode to the modern bride, ‘Rose and Rue,’ which also marked the label’s debut into menswear, respectively — were hosted off venue. The first was at Shamaeel’s own home, the latter, at an exclusive winter wonderland solo space created for Sana Safinaz at the Marquee, where their magnificent collections were duly curated and showcased.

Significantly, both these solo shows had individual guest lists, which irrefutably, drew in a far more glamorous audience in comparison to that sitting (or snoozing) through the main shows, whose lacklustre Red Carpet from day one had visibly lacked pizzazz, peopled as it was by a handful of “celebrities” and an army of media.

Perhaps the Fashion Council might consider a Winter Festive Fashion Week in the future along the lines of a limited model: fewer, carefully selected designers of repute; 100 fashion media professionals; socialite guests and a smattering of celebs. A smaller event, yet glamorous and entertaining enough to be showcased on television, backed by a consistently happy channel sponsor, and still generating revenue. 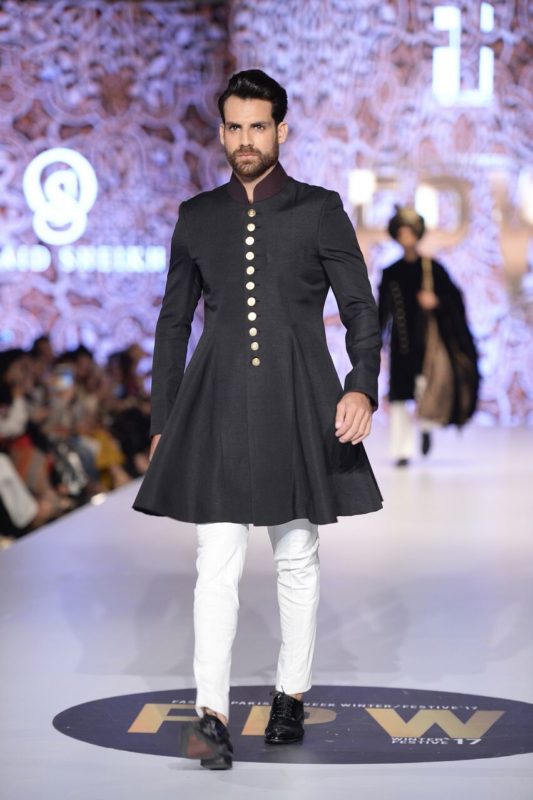 The rest of the showcases were definitely not as impactful and were decidedly tepid and monotonous as bridal shows are wont to be. In fact, one felt mired in the mind-numbing Groundhog Day ennui, with mostly similar, indistinguishable, predominantly heavy collections being paraded one after the other.

There were only a few designers who stood out with their distinctiveness and followed the brief of a versatile winter festive theme. These included Sanam Chaudhri’s jewel-toned and eclectic ‘Pandora;’ a capsule with its adaptable pieces for both wedding and party wear; Adnan Pardesy’s dark avant-garde colour-play and textural detailing in his ‘Riwayat’ collection; Maheen Khan’s timelessly classic ‘The Lion & The Muse’ capsule with its bold, almost rebellious rebuttal of traditional bridal wear, eschewing embroidery and instead transmogrifying silhouettes, including her ingenious sari/gharara hybrid ; Sadaf Malaterre’s layered, deconstructed, western silhouettes; with their wintry and non-festive colour palette; some pieces by Aamna Aqeel, including a noir, beautifully hand-embroidered velvet kaftan, and Misha Lakhani’s old world charm capsule inspired by Persian, Central Asian and Indian designs, but missing its juxtaposition with the contemporary ‘it’ girl vibe that had once made her designs so refreshing.

What might have elevated Lakhani’s collection and all the others was the choice of models selected. Only the tall, gazelle-like Eastern European and Russian models flown in from Dubai by one of the sponsor airlines — who added much needed diversity on the catwalk — did justice to the clothes. The FPC must enforce stringent minimum height guidelines of at least 5’7” for female models, because watching a barely 5’3” model — even in towering heels — fumblingly traipsing alongside a graceful six foot Amazon, is an eyesore-and-a-half! 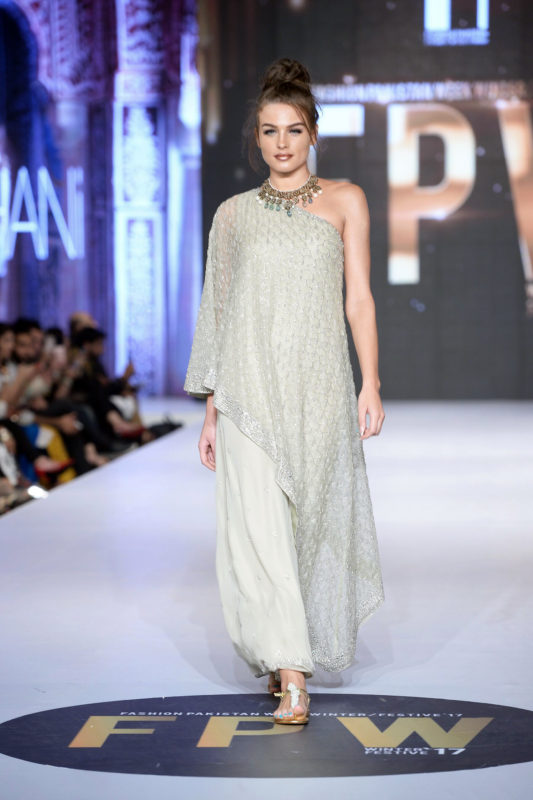 Furthermore, although still in demand because of their “celebrity” and fashion industry friendships, some models, looked decidedly long-in-the tooth and should consider retiring from the youth-oriented catwalk.

Moreover, the Council must hire a fashion editor — or three — to select fashion week-worthy collections that are allowed to be showcased and to edit these capsules stringently if need be; not based on just a cursory nod by the CEO and a designer’s ability to afford the participation fee.

A main grudge against Pakistani designers of late is their lack of creativity and thinking out-of-the-box, buoyed instead by commercialism and being afraid to be experimental and cutting-edge, lest they lose their clientele. When one attends a Fashion Week one wants to be surprised, startled, piqued, titillated and mesmerised. One really doesn’t want to see a very slightly improved version of what one may see at a designer’s atelier, or even a department centre store! Pakistani designers need to return to the essence of Fashion Week, which is an unyielding and steady balance between drama and commercialism; something which most designers do not have a good hook on, hurtling towards one extreme and the other; case in point being Tena Durrani, whose traditional and rather pristine collection played it Ã¼ber safe and might have instead fared better at some Bridal Couture Week showcase, like many of the other designers, who merely presented their heaviest wedding wear or followed internet trends, with the ensuing result being a profusion of peplum silhouettes as the on-trend must-show! 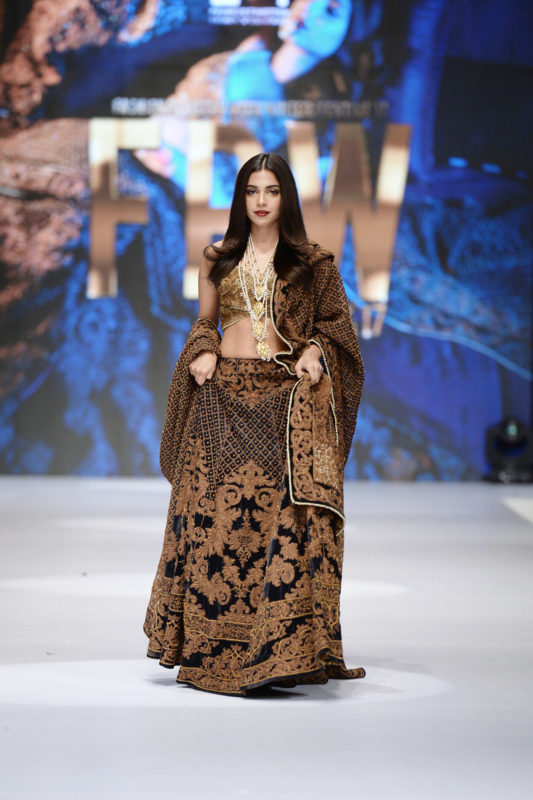 Admittedly there is little innovation one can embark upon with bridals, but one can at least make bridal and festive wear runway-friendly with the introduction of new hybrid silhouettes; untried trends, fresh colour palettes and experimentation with embroidery and texture. Exhilaration has to be created. Despite lacking an indubitable X Factor’ Suffuse, Emraan Rajput and Nauman Arfeen presented collections with enough drama to do justice to their inclusion and participation.

Furthermore, it is an established fact that designing a bridal couture collection is both costly and time-consuming, so designers should make their shows entertaining and memorable as well. Show producers — at this juncture Frieha Altaf — should again be more inventive by encouraging designers to show short fashion-art films, or even have a surprise musical guest performance by the likes of a Meesha Shafi or Zoe Viccaji. Progressive fashion buoyed by a modicum of entertainment (grinning and obsequious “showstoppers” — who at Winter Festive ’17 few initially even recognised or clapped for — are not fun to watch) makes for a more satisfying Fashion Week.

There was a dearth of wow moments at the shows, except for Wardha Saleem’s flamboyant ‘Dholak’ showcase, which celebrated the mehndi bride replete with live dholaks and thalis, with models’ performing dance jhatkas with flowers and candles and the overall replicative presentation of a mehndi environment. Other designers needed to offer the cadre of 50 or more front row insta-bloggers and snap-chatters something memorable to document at least!

Some of the extraneous saving graces of the Winter Festive Fashion Week were Nabila’s N-Pro/N-Gents team skillfully morphing different looks for successive shows, with untidy braids transforming into coifs and ’20s ringlet waves curled to the cheek and forehead; and the gastronomic haven of The Lux VIP Lounge, a veritable hang-out, where media and the few celebrity guests mingled and chatted over coffee, petit-fours and desserts by NÃ©cos and the magnetic, long-queued Magnum Bar.

Economics seems to be both, the mainstay that buoys the execution of Fashion Weeks, as well as a deterrent for leading designers such as Umar Sayeed, Shehla Chatoor or Nomi Ansari to participate in, since creating and later trying to sell special and costly Fashion Week collections obviously makes for more trouble than its worth.

But we would all rather experience a limited edition, crisp and sophisticated event which begins on-time — day one began a good 90 minutes behind schedule, with the time on ensuing days improving ever so slightly — rather than witness a cavalcade of inconsistent and bi-polar designs vacillating from the sublime to the shoddy and a Fashion Week which lacked festive verve.

Just as a designer is as good as his/her last collection, so too is a Fashion Week thus adjudicated.