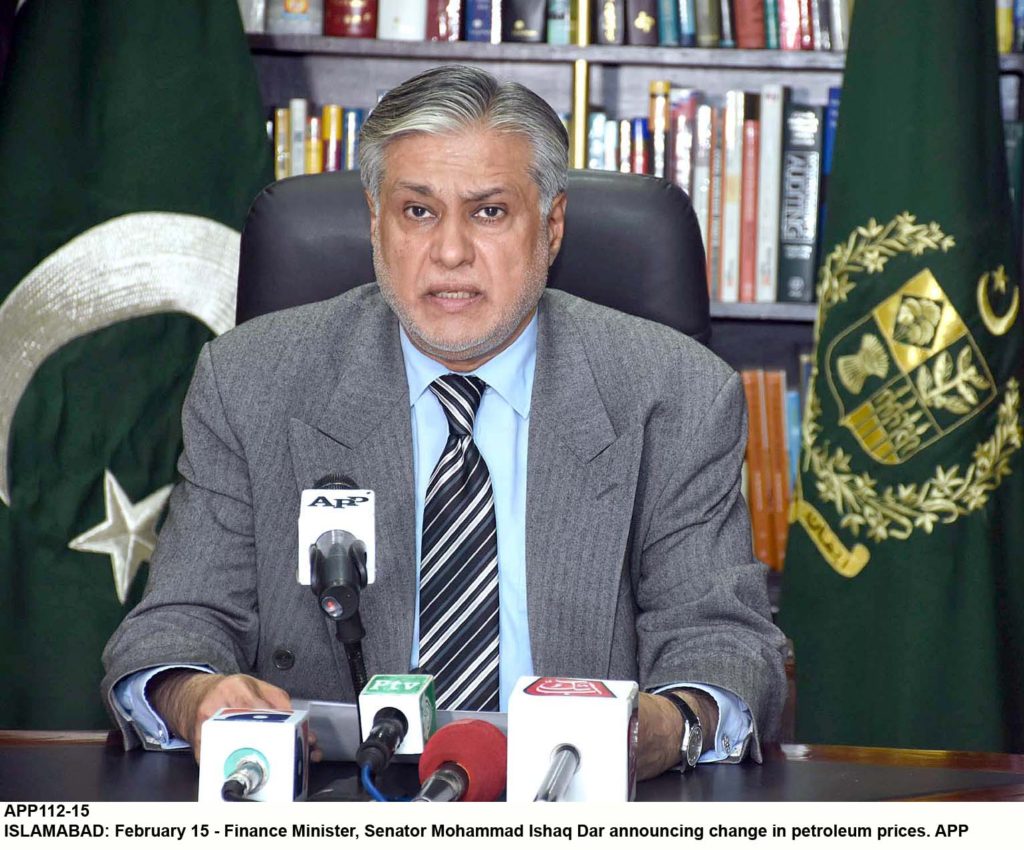 In the first two months of FY18, Pakistan exported goods worth $3.93 billion compared to exports valuing $3.34 billion in the same period of last year, reflecting a reasonable year-on-year increase of 18 per cent. However, imports jumped much faster to $8.98 billion as opposed to $7.02 billion in the corresponding period of last year, up 28 per cent.

Balance of trade in both goods and services in the first two months of FY18 was negative — $6.03 billion compared with a deficit of $4.35 billion in the same period of the previous year.

Worker’s remittances amounted to $3.5 billion in the first two months of fiscal year 2018, up 13.2 per cent from the same period of the previous year, when they totaled $3.09 billion. Remittances make up almost half of Pakistan’s import bill and cover the deficit in the trade of goods account.

Pakistan had already posted a much higher-than-expected deficit of $12.1 billion ‘4 per cent of gross domestic product’ — (GDP) in the previous fiscal year ended June 30, 2017. The enormous increase suggests that the government has been unable to manage its balance of payments position over the medium and long run.

Pakistan’s balance of payments position has come under tremendous pressure during 2016-17 owing to an extraordinary surge in imports, decline in exports and external flows such as remittances and the Coalition Support Fund (CSF). Resultantly, the current account deficit surged to $12.1 billion in 2016-17 as against $4.9 billion in 2015-16.

In order to meet the emerging crisis the government needs to immediately devalue the rupee, impose regulatory duty on non-essential imports, undertake export promotion campaigns, float dollar bonds and resort to bilateral borrowing. In the current scenario of falling foreign currency reserves, the government also needs to go for monetary tightening over the next few months.

However, the government chose to sidestep the issue, resorting to borrowing instead and avoiding more rational moves like devaluing the currency, imposing regulatory duties on non-essential imports and undertaking export promotion campaigns.

According to the Board of Investment, Pakistan had received a record FDI of $5.4 billion in fiscal year 2008, but since then the country has been struggling to touch even half of that milestone.

Remittances meet almost half of the import bill of Pakistan and cover the deficit in the trade of goods account. Some experts believe that any slowdown in remittances is a worrying sign for the country. Remittances are on a decline due to changing economic conditions in the Gulf countries. Overseas Pakistani workers remitted $12.36 billion in the first eight months of the last fiscal year, about 3 per cent less than the previous year.

While officials claim that by the end of the current fiscal year the economy would record a growth rate of well over 5 per cent, most independent economists expect the growth rate to remain within the range of 3-4 per cent, as according to them, industrial growth is deteriorating and the performance of agriculture has, by and large, stagnated.

The investment rate is moving at a snail’s pace and the private sector continues to wait and watch. Foreign direct investment appears to be trickling in and that too only from China.

Unemployment, the budgetary deficit and public debt, including foreign debt, are all soaring, making it almost impossible for Pakistan to postpone the inevitable — going to the IMF for emergency aid — much longer.

The government has mobilised resources mainly by raising taxes and its dependence an withholding taxes has increased to such on extent that almost 90 per cent of income taxes now accrue under this head. The government has also been exploiting the petroleum sector for raising revenues. The widening gap between collection and expenditure is still filled, however, by resorting to extensive borrowing.

On the other hand, hard earned revenue plus borrowed resources are being wasted on non-economic projects that yield colourful media coverage aimed at playing to the gallery. The crucial education and health sectors are completely ignored.

During the last four years, economic growth, according to official statistics, accelerated from 3.7 per cent in 2012-13 to 5.3 per cent in 2016-17. But these growth numbers appear dubious to independent economists; the actual growth number calculated by these economists suggests that it averaged 3.6 per cent per annum — more or less in line with the previous five-year average.

It is highly unlikely for growth to accelerate amidst declining private sector investment, production and consumption of electricity. Human capital has worsened as both the literacy rate and the gross enrollment rate in primary education have declined.

The performance of agriculture also remained lacklustre over the last decade. It has grown at an average rate of 2.3 per cent per annum since 2007-08 to date. Large-scale manufacturing numbers are said to be grossly overstated.

Investment as a percentage of the GDP has virtually remained stagnant at 15.5 per cent over almost a decade (2008-17).

Luckily for Pakistan, a new opportunity in the form of the China-Pakistan Economic Corridor (CPEC) has opened up between Balochistan — which is said to be gifted with mineral riches amounting to trillions of dollars — and Western China, where industrialisation is taking place at an accelerated pace.

The trade quantum that will pass through between Gwadar port in Balochistan and Xingjian in Western China in the next 10 years or so is estimated to amount to a trillion dollars annually.

To make the most of this opportunity we need to invest in developing a huge mass of educated and skilled manpower out of the youth bulge with which Pakistan is endowed. There is no plan on the cards to achieve this objective.

Approximately $28 billion worth of fast-tracked “Early Harvest” projects are to be developed by the end of 2018 — because China wants its shortened global trade routes to start paying back without much loss of time. But at the pace with which our side is moving on these projects, it is highly doubtful that the completion deadline will be met.

With extensive roads, railways, ports and energy infrastructure being laid down, businessmen all around Pakistan would find new opportunities worth their time and money. With many projects being developed on fast-track as part of the Early Harvest Projects, multiple business opportunities across the value chains of industry are set to open up. But our private sector seems to be still waiting and watching.

World oil prices had declined almost by half compared to what they were in mid-2014. This impacted on the oil import bill rather positively, saving Pakistan over $13 billion in the last three years. And this helped in keeping the domestic rate of inflation at a manageable level, facilitating the State Bank of Pakistan to cut the discount rate to its lowest level in decades.

The IMF gave Pakistan a record 15 waivers in a three-year programme. Perhaps never in the IMF’s history has the world witnessed such concessions from the Fund.

But all these positive opportunities were squandered. And in order to show inflated revenue collection, the government resorted to some unusual tricks like holding refund/rebate of exporters and coercing commercial entities to pay taxes in advance. The tax authorities had withheld as much as Rs. 300 billion of refunds.

Privatisation proceeds and foreign grants, instead of being treated as financing items, were treated as non-tax revenue, which accordingly raised the overall revenue to show a lower budget deficit.

The persistence of a large fiscal deficit resulted in the accumulation of public debt. The government has added Rs. 7.0 trillion to public debt in four years. Public debt increased from 64 per cent to almost 69 per cent during this period. As much as $19 billion were added to external debt and now the total amount of external debt has reached an astronomical figure of over $90 billion.

One expects debt servicing to reach $7.0-7.5 billion by the end of fiscal 2018, which would mean the financing requirement will jump to $23-$24 billion in 2017-18. The likely availability of external financing from various traditional sources, China and the FDI, would at best be in the range of $12-12.5 billion. This leaves a financing gap of $10.5-11.5 billion in 2017-18. As of now no one knows where we would get the resources to fill this huge financing gap.