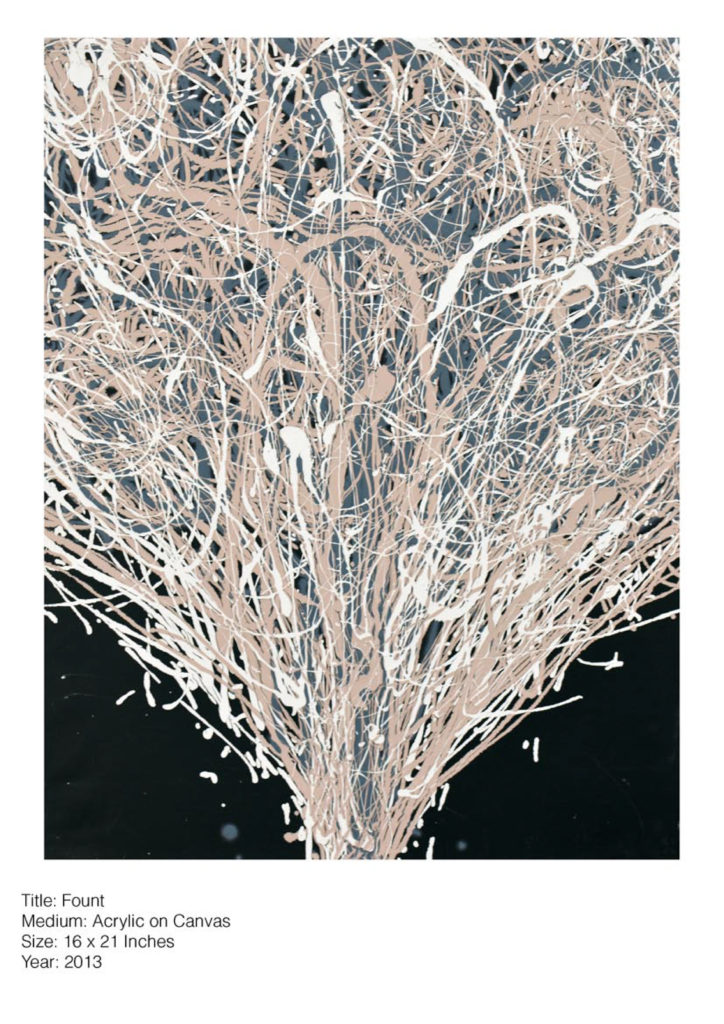 Canvas Gallery recently held a solo show of Ali Raza’s paintings grouped under the title Painting Remains. What seems not to have remained is value-laden and narrative-dependent art. Instead, the emphasis is on structuring space.

Ali Raza’s work is best approached with an analytical frame of mind. His canvases, worked in acrylic, make strong use of gestural marks in the form of lines, grids and shapes with quite complex geometries. His paintings may be described as depictions of energy in various forms: flows, disruptions, containment and coalescence.

Raza has stated that for him “painting is about the joy of creating an ambiguous image that transcends beyond time and space.” The strong structural content of his line-work makes the ambiguity one of spatial perception rather than subjective meaning. The preponderant use of line serves to create pattern and shape and to divide the picture plane. It also contributes to rhythmic content which replaces the lack of narration in the works on display.

In the paintings titled ‘Fount’ and ‘Threshold,’ curved drip lines emanate from a central point like juicy magnetic field lines. They are reminiscent of Pollock’s drip paintings but with significant differences. Whereas Pollock’s monumental canvases with all-over drips were entirely abstract, Raza’s smaller canvases have a strong directionality with suggestions of representation. Unlike Pollock, whose lines created the illusion of continuing beyond the edges of the canvas, Raza draws the attention of the viewer back within the confines of the canvas. 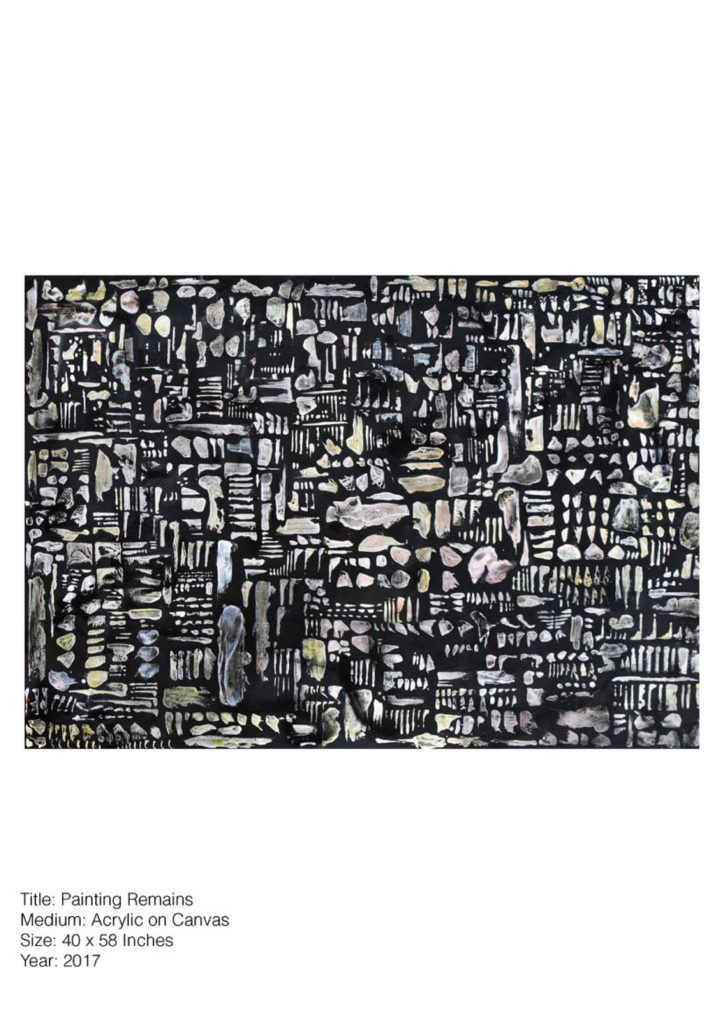 Take, for example, the painting called ‘Braille;’ the rust background is overlaid by black and white irregular hash marks. Two circles — one black and the other white — are placed off-center to break the all-over impact by the use of asymmetrical balance.

Even in a work such as ‘Painting Remains’ in which dabs of paint in differing sizes and shapes are placed end-to-end, the subtle gaps in which the black background shows through, forces the mind to interpret this as demarcation lines. Each individual dab has its unique characteristics that are revealed by close examination. The pressure of the brush on canvas and its pull away from the surface create tiny differences.

Colour in Ali Raza’s work is subtle and is used to augment the language of the line. In ‘Overlook,’ a mess of black and white shapes occupies the lower two-thirds of the canvas. The upper third is painted sky blue. It is only at the irregular intersection of shape and colour that a sense of a cityscape is conveyed. One may then read the grid lines to represent claustrophobic urban dwellings which are reprieved by the blue sky in which curious white discs float like clouds. 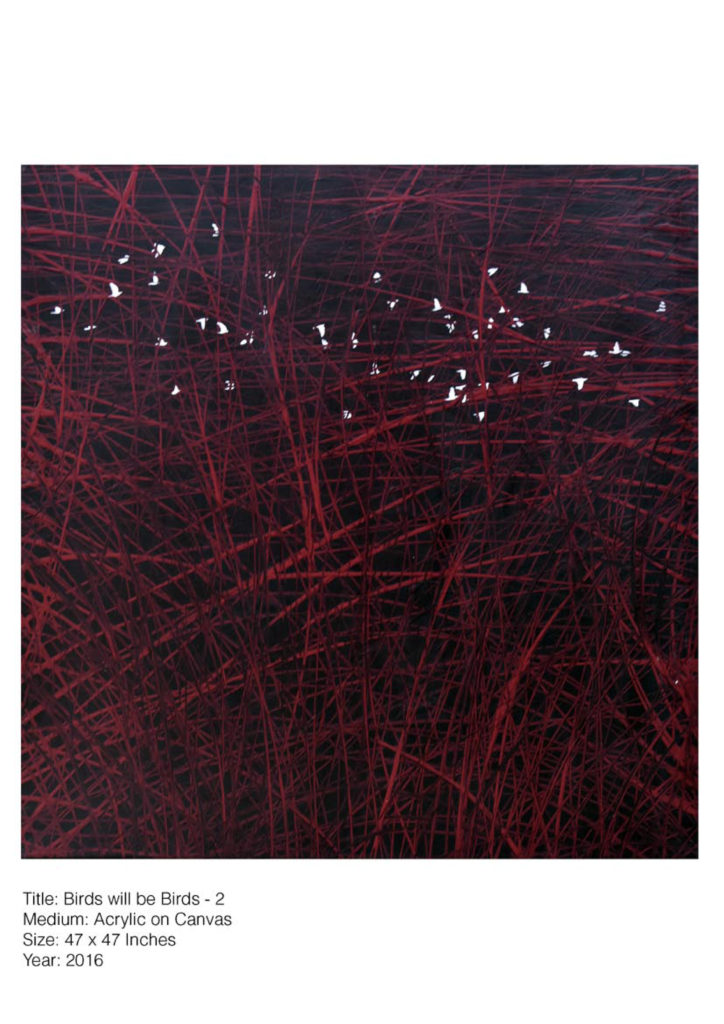 In ‘Birds will be Birds — 2,’ carmine-coloured lines crisscross on a dark background. A flock of birds, painted in white, are luminescent against the dark backdrop. The lines are open to interpretation. They may well suggest satellite track lines of bird migrations. 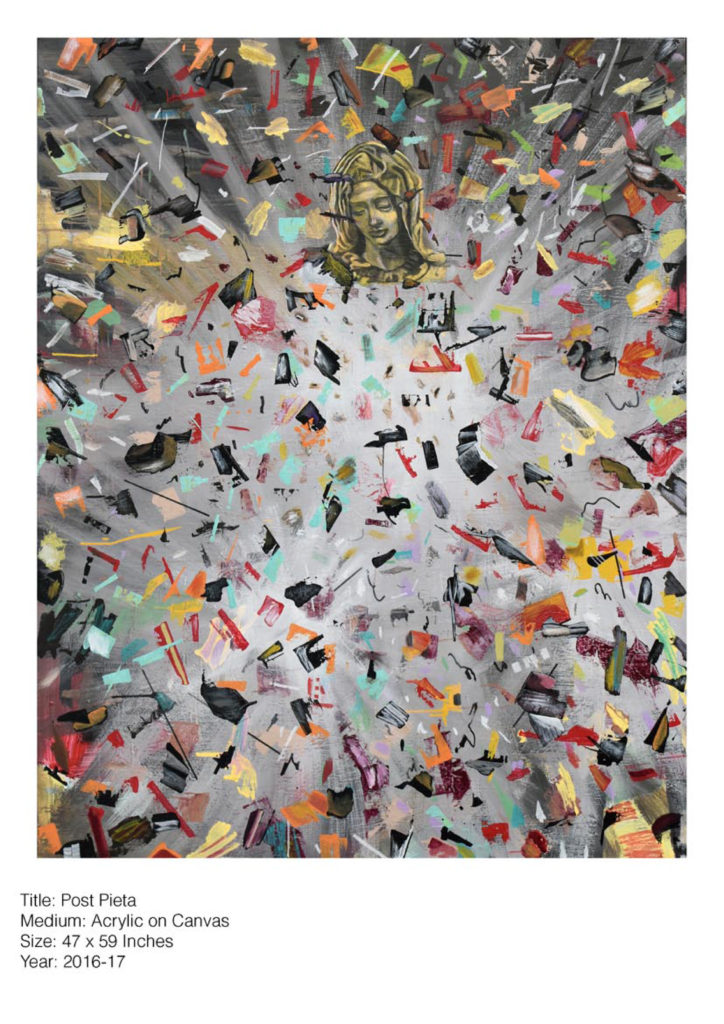 Ali Raza is not averse to including representational imagery in what he refers to as “drawing tension between notions of abstraction and representation.” In ‘Convergence,’ a hatted and bespectacled man is visible between segments of upright bands and horizontal rectangles. In ‘Post Pieta’ and ‘Post Vanity,’ a Madonna head and an ornate mirror are placed with an explosion of confetti-like shapes that radiate outwards like Tetris tiles. The contrast between image and geometry, which have been juxtaposed together, convey a touch of surreal ambiguity. 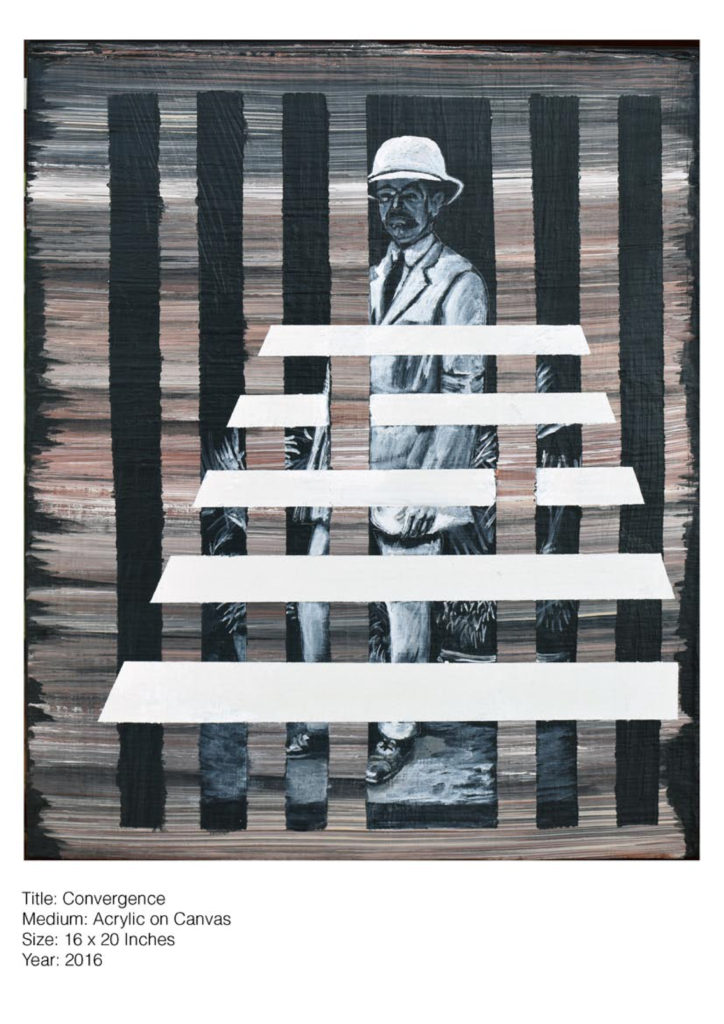 Ali Raza’s work in Painting Remains adheres quite closely to principles of Euclidean geometry. But in the painting titled ‘Difficult Packing,’ space is represented more multi-dimensionally as, what seems to be a skyscraper-like structure, curves and folds into a suitcase.

The 21 artworks on display, with their reliance on the use of line, create visual ambiguities that offer a liminal hiatus to reflect on the manifold perceptions of space.