By Ally Adnan | Published 4 years ago 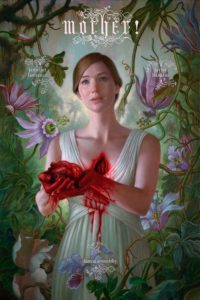 It is impossible to tell where Darren Aronofsky’s Mother! is headed during the film’s 120-minute run. And although the denouement may be a trifle disappointing for some, the lack of predictability keeps one engaged, entertained and horrified throughout the movie.

Mother! can be compared to Roman Polanski’s Rosemary’s Baby — indeed the first half is distinctly Polanski. However, Mother! is more radical, more daring.

There are many ways to watch Mother! and each one affords a distinct pleasure. It is profoundly disturbing as a psychological drama, deeply distressing as a tale of marital discord, intensely funny as a comedy, greatly shocking as a horror film, relentlessly startling as a thriller and, in the final analysis, totally captivating as a film that does not fit neatly into any of the traditional genres of cinema.

Jennifer Lawrence is the central character of Mother! Like all other characters in the film, she is not given a proper name. Referred to as “Mother” in the closing credits, she is the young wife of a successful poet, billed as “Him,” played by Javier Bardem. The couple lives in a large octagonal country house that is encircled by grass and trees, without any driveways or roads. He is a tormented creative artist, struggling with intense writer’s block. Selfish and difficult, he needs his solitude as much as he needs the attention of his muse. Loyal and devoted, she supports the much older husband while keeping herself busy with renovating the house that was burnt in a mysterious fire. She wants children. He is not interested in having sex with her. The two lead cordial but disconnected lives in the house which has little, if anything, to do with the rest of the world.

One evening, an unexpected visitor appears at their door. The “Man” (Ed Harris) claims to be an orthopaedic surgeon who has been told that the house is a bed and breakfast. Even though it is not one, the husband invites him to stay the night in his house. The man turns out to be a fervent fan of the older works of the poet, who comes to enjoy the stranger’s company and adulation. The next morning, the stranger’s wife, “Woman” (a deliciously funny Michelle Pfeiffer), shows up at their door. The poet invites her to live in his house as well, against his wife’s mild protestations. He continues to fill the house with people who love his poetry, and as more strangers join the couple, the wife, distressed and disturbed, is forced to deal with unending intrusions with stoicism and compassion. She comes increasingly unhinged as her husband’s pleasure in being surrounded by creepy acolytes grows. The story progressively devolves into a phantasmagoric nightmare, full of metaphor, allegory and symbolism.

Aronofsky’s edgy, ambitious film, replete with biblical references, tackles a large number of subjects, both big and small —gender roles, marital disharmony, religious fanaticism, celebrity worship, the artist-muse relationship, and even global warming. Aronofsky himself considers the film to be an environmental metaphor. “[I wanted] to tell the story of Mother Nature from her point of view,” he says. “The structure of the film was the Bible, [and I used] it as a way of discussing how humans have lived here on Earth.”

Mother! is an exceedingly well-acted film. Javier Bardem’s portrayal of a tormented artist, in need of validation, is truly brilliant. In her finest performance in years, Michelle Pfeiffer dazzles in the role of the sexy, rude house-guest who invades the personal space of the hosts proving that, even at 59, she can look arrestingly beautiful and purr like catwoman. Jennifer Lawrence, of course, is the star of Mother! She deftly negotiates the surreal trajectory of the film’s narrative by delivering a sincere, committed and intelligent performance. Cinematographer Matthew Libatique’s handheld camera tracks Lawrence’s facial expressions, which register feelings of discomfiture, displeasure and disquiet with perfect, understated accuracy.

Mother! has been controversial at film festivals around the globe, attracting equal numbers of ardent admirers and vicious haters, who have been immensely vocal about their opinion of the film. The divisiveness served as a catalyst for intellectual discourse and discussion. That, undeniably, is the greatest achievement of Mother!