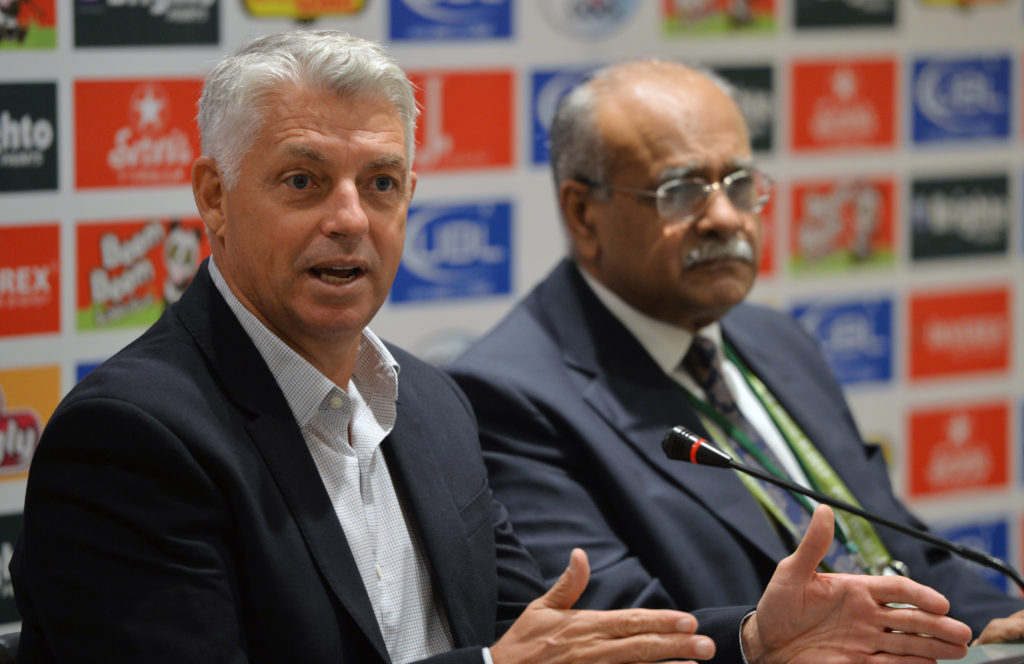 The Independence Cup, arranged by the Pakistan Cricket Board (PCB) in collaboration with — and with much-needed support from — the International Cricket Council (ICC), was the latest instalment featuring international cricketers to earn the #CricketComesHome billing.

While the Zimbabwe tour of 2015, and, more recently, the Pakistan Super League (PSL) final — marred by the phateechargate controversy — were touted as the resumption of international cricketers touring Pakistan, the series against the World XI was the formal homecoming.

Among the many reasons for this is that this T20 international series, which ended with Pakistan beating the World XI 2-1 in an intriguing contest — both on and off the field — was designed for this very purpose, and its fixtures were hence given the status of international matches by the ICC.

And those that might have been late in joining the party were told that this was “much bigger than cricket,” by everyone concerned from the moment the all-star team landed in Lahore. None was more emphatic about this than the visiting skipper Faf du Plessis, who reiterated he would like to share the stories of this tour with his children in the years to come as one of his “proudest achievements” as a cricketer.

The three-match series itself offered everything cricket fans — Pakistani or not — could desire: big names, skilful bowling and batting, tough competition, and lots of drama. With the likes of star batsman Hashim Amla, highly rated spinners Imran Tahir and Samuel Badree, Proteas’ captain Faf Du Plessis, and World T20 winning captains — England’s Paul Collingwood and the crowd darling Darren Sammy — among others gracing the stage, it wasn’t quite anything like the AO Trophy held between Pakistan All Star and the International World XI held in 2012 at the National Stadium, Karachi.

It was much more — and that showed over the three days it played out.

It isn’t a wonder that the series made headlines all over the world, and fans of the game tuned in to watch it from across the globe, relegating interest in key series like the one between India and Australia, to the backburner. 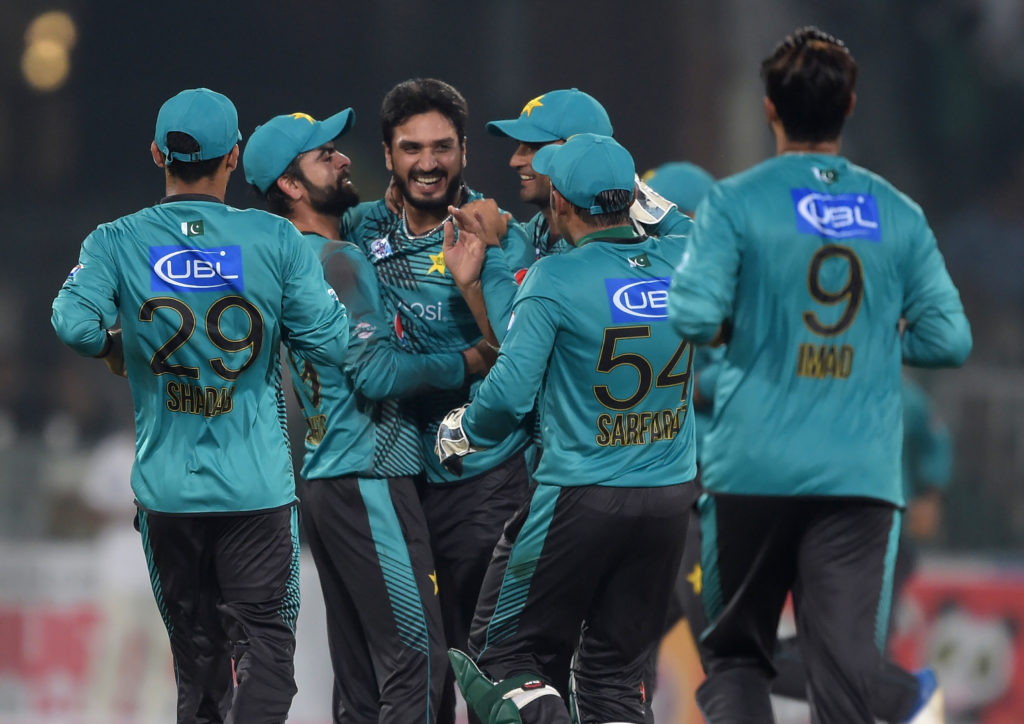 The Pakistani team celebrates a wicket.

The first T20, held on September 12, was, naturally, the most highly anticipated: enthusiastic fans coming into Lahore from all over the country reduced the city to a quagmire of lengthy lines of vehicles and traffic blockades. Critics might argue that this reflects poor administration on the government’s part, and yet, all the matches tossed off at the right time, with Gaddafi Stadium almost jam-packed in the first two games, and definitely in the finale. So they must be doing something right.

To add to the excitement of the already-charged crowds, the hosts opened the batting and posted a commendable total of 197/5 for their guests to chase. The batting performance was encouraging for Pakistan, considering the recent T20 struggles, which seem to have found a much-needed solution through the heroic Champions Trophy win in the longer version of the game. Babar Azam’s 86 off 52 was the highlight of the innings, which he secured with the help of 10 fours and two sixes. Veteran Shoaib Malik’s 38 off 20 proved to be crucial in the end, especially after Ahmad Shahzad had consumed almost six overs himself for his 39. Champions Trophy hero, Fakhar Zaman’s 8 off 4 balls set him on a struggling pattern throughout the series, with his early dismissal bringing Babar Azam and Ahmad Shahzad together in all three matches. It might be too soon for Pakistan to worry about Fakhar, but the fans are all too familiar with explosive batsmen up top witnessing their careers going downhill after impressive starts.

The all-star guests fell 20 runs short of the target, handing the hosts the opening game. The wickets were evenly distributed between Sohail Khan, Shadab Khan, and newbie Rumman Raees — each had two to his name — with the killer choke coming from spinner Imad Wasim, who bowled his four overs with an economy rate of just 5.5. Star pacer Mohammad Amir’s name was missing from the lineup owing to the birth of his first child, which coincided with the event.

The second T20 was held the very next day — September 13 — at the same venue and saw the World XI redeem themselves with a fine performance that levelled the series at 1-1 — in what was the game of the tournament. Important knocks came from anchorman Hashim Amla and Thisara Perera who each went not out, 72 off 55 balls and 47 off just 19 balls, respectively, while chasing a total of 175. The guests chased the target with the fall of just three wickets, and despite the match going to the penultimate delivery, the World XI never looked like they would be losing it. 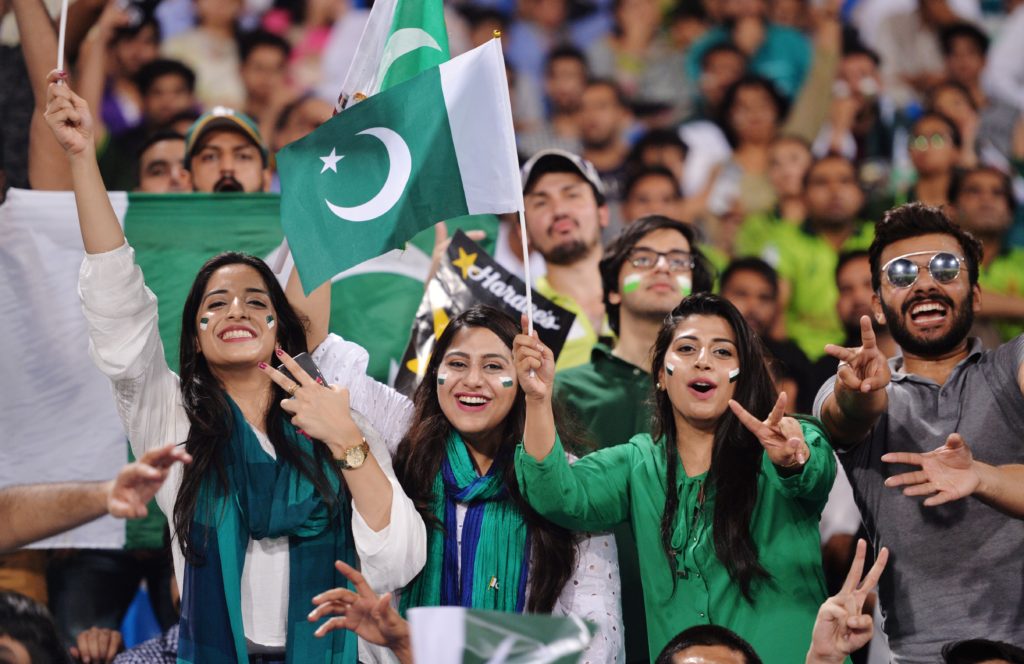 The decider, held after a gap of one day, on September 15, saw the Pakistan side open the batting once again. As Fakhar Zaman’s fairly unremarkable series continued — he did manage to score 27, but off 25, this time around — the hosts found an unlikely hero in Ahmad Shahzad, who posted a scoreboard-boosting total of 89 off 55. After Zaman’s fall, he received help from the Man of the Match of the first game, Babar Azam, who fell just short of a 50 with a score of 48. The final score: 183/4 in 20. Another heartening batting performance from the hosts, with the target set between those posted in the first and second ODIs, that Pakistan had won and lost respectively.

The World XI’s response was disappointing for a critical decider: their batting innings saw one after another wicket falling without much resistance from any particular player. Despite a promising start, the top order crumbled quickly following Hashim Amla’s run out — the World XI were 5 down at just 67. The lower middle order, particularly David Miller and Perera, showed some resistance, but it was, perhaps, too little too late. The guests eventually fell 34 runs short of the target, and the Independence Cup was won by a very jubilant, very grateful, Pakistani team.

Despite the loss, the World XI captain, Du Plessis, came up with very kind words at the series’ closing ceremony: “The series is a huge success. Cricket’s come back to Pakistan. From our point of view, we thank everyone.” And that, undoubtedly, was the point of it all.

However, what remains to be seen is if the PCB will succeed in following the Independence Cup up with some “serious” cricketing series or not. Critics from the other side of the border, are sceptical: “Was the World XI tour the return of international cricket in any real sense? The involvement of a smattering of big names of world cricket may have given the impression that it was, and choosing the same venue from where the flight of international cricket started gave the World XI tour a degree of credibility. But one can’t ignore the fact that the World XI that played the T20 series on Pakistani soil wasn’t exactly a galaxy of superstars,” read one piece emanating from there. It went on to argue that the absence of big names like Virat Kohli, MS Dhoni, Ben Stokes, David Warner, AB de Villiers, etc., led to the Pakistani security agencies having somewhat of an easier time than had they been included in the World XI side. Sour grapes? Do our esteemed neighbours believe the value of Du Plessis’s life and security to be unequal to that of Virat Kohli or MS Dhoni? Or perhaps one misread that excerpt.

On the other hand, there is much encouragement that can be gathered from the event, for those who are looking for it. The most encouraging aspect of the event, arguably, was the involvement of the ICC. Unlike the PSL and the Zimbabwe series, the Independence Cup came with the strong support of the ICC who funded the heavy security provided to both the teams. Furthermore, the ICC — via its Head of Media and Communication, Sami-ul-Hassan — has shown its intention to continue its support to cricket in Pakistan, which is a very promising development.

However, it is true that the exploits of the PCB and the return of international cricket in Pakistan will only be solidified when the arrival of full international cricket teams and the holding of cricket series becomes a permanent and “normal” fixture in Pakistan. Even the visiting World XI stars regularly admitted that the decision to participate in the series was their “personal” call and hence five South Africans being a part of the touring group doesn’t necessarily translate into the South African national side being any closer to touring Pakistan — which, of course, is subject to the cricket board’s approval.

Hence, the Sri Lankan cricket team’s tour of Pakistan in October — where they will play at least one T20, with the rest of the matches being contested in the UAE — will do much to consolidate the progress. This carries special significance, since theirs was the squad that was attacked in 2009, resulting in the exile of international cricket from Pakistan.

Furthermore, the West Indies have also confirmed that they will be playing a three-match T20 series in Pakistan in November. If these matches are successful, others should soon follow suit — and not just in Lahore. 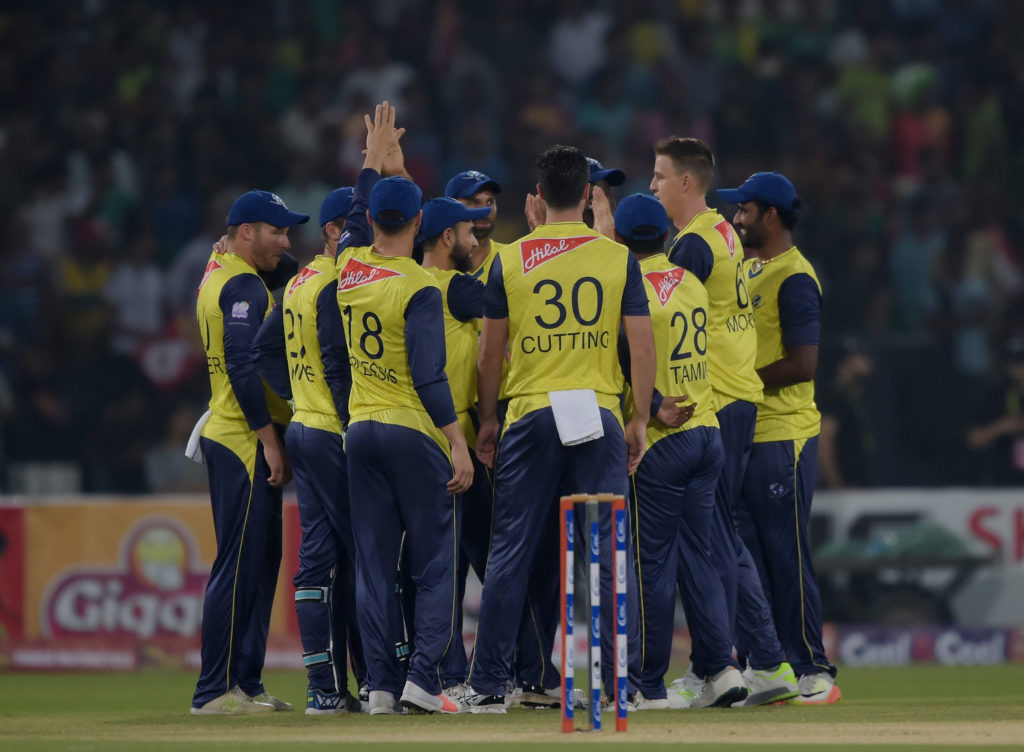 The third edition of the PSL will have “at least four” matches in Karachi. That some matches will be played in Pakistan is being etched in the contracts of foreign athletes who will participate in the PSL.

Therefore, the next six months — with Sri Lanka and West Indies touring, and much of the PSL 3 being held in Pakistan as well — will provide the foundation that should completely open the gates of international cricket to Pakistan in the near future.

And when they are finally opened to one and all, the Independence Cup will forever be remembered as the key that unlocked the international doors for Pakistan.