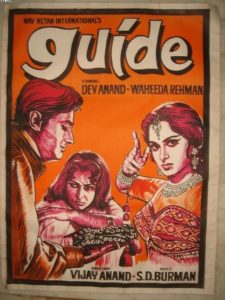 It is over half a century old, but still looks and feels contemporary. The Bollywood movie, Guide is testament to a classic film far ahead of its time, and among the best in ground-breaking Indian cinema. It explores the themes of an extra-marital affair, the art of dance which was then primarily associated with ladies of the night, and boasts a strong feminist nuance for it depicts the role of a woman as being far more than that of a good, domesticated wife.

Released in 1965, the film opens to the soul-stirring melody of S. D. Burman’s “Wahan kaun hai tera, musafir jayega kahan,” in a song which was introduced — and immortalised — by Kishore Kumar to a generation of cinemagoers from India and the rest of the Hindi/Urdu-speaking world. Having been just released from prison, Raju (Dev Anand), an intelligent but cynical young man hits the road, reluctant to return home to his previous life or relationships. Owning nothing but a few clothes, he comes to rest at an abandoned ashram near a poor village where he is mistaken for a Swami (holy man).

Meanwhile, both Raju’s mother as well as his partner-cum-lover, Rosie (Waheeda Rehman) arrive at the prison to take him home. Finding him gone, both have an unpleasant showdown, with Raju’s mother accusing Rosie of all the evils that have befallen her only son. Rosie tries to explain the sequence of events that transpired since Raju’s mother last saw them, and the story unfolds of a guide who went astray.

A talented dancer, Rosie is an unhappy and depressed wife who arrives at a tourist destination — Raju’s city — with her aged archaeologist husband, Marco (Kishore Sahu). His indifference and infidelity drive her to an attempted suicide, from which Raju rescues her. A relationship develops thereon, in which Raju recognises Rosie’s talent as a gifted dancer. With consistent gentle persuasion, he encourages her to pursue her passion and promises her success and stardom after she walks out on her husband. Raju even takes on his mother and neighbours when he provides Rosie a refuge in his own home and insists on her practicing her dance.

An interesting aspect of Raju’s footloose and fancy-free character is that he is completely devoid of societal prejudices. He has no problem with the fact that, prior to her arranged marriage, Rosie was the daughter of a prostitute, and her union was a consequence of her mother’s desperate attempt to give her daughter a chance at a respectable life. Neither does it prevent him from falling in love with her, nor living together, breaching societal norms.

In his role as Rosie’s manager, Raju helps build her career and establishes her as a star, shown in progressive sequences that have some outstanding dance performances by Waheeda Rehman. As Rosie’s success brings in the wealth, Raju succumbs to the materialism and weaknesses of the showbiz world. He develops an inflated ego and takes to drinking and gambling, souring his relationship with Rosie.

Based on a novel of R. K. Narayan (Guide) by the same name, the movie deviates from the original but it stays true to the characters of the hero and heroine, who are not portrayed purely in black and white, but in various shades of grey. Raju transforms from a charming glib tourist guide to a selfish and self-serving personality. The story sees further transformation in Raju’s character — from a homeless man he is inadvertently forced into the role of a saint, and pays for his sins in more ways than one.

The novel inspired renowned author, Pearl S. Buck, to write a script for an English version of the film, which unfortunately flopped. But the Hindi version of the Guide became a box office success, sealing Dev Anand’s reputation as a far-sighted actor and a film producer and established his brother, Vijay Anand’s credentials as a director. It was India’s official submission to the Academy Awards in the Best Foreign Film category in 1966.