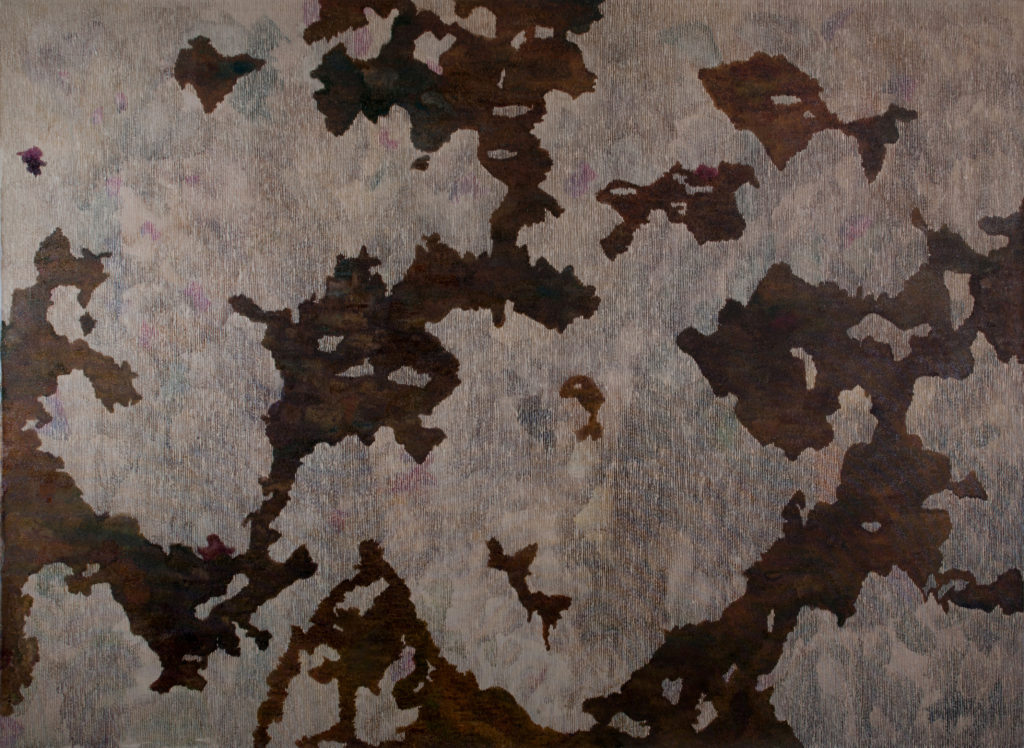 Sanat Gallery held a show of three emerging artists, who trained in miniature painting at the National College of Arts, Lahore. Abid Merchant of Sanat Gallery drew on the commonality with Persianate traditions common to the three artists’ work in grouping them. Marjan and Maryam Banisadr are twin sisters from Iran. Shah Abdullah Alamee is a Hazara from Quetta. It was interesting to see how the three artists negotiated the complicated business of identity through painting.

Marjan and Maryam have both examined Persian traditions in their work, but their style is as different as their resemblance to each other is similar.

Marjan has focused on the Persian carpet in her work. Her depiction of this archetypal craft object is rendered through a deconstruction of the carpet. In none of her six submissions to the show is the rug shown in its entirety. Working on canvas, Marjan takes floral clusters such as are found within the borders of the Persian rug, and expands them to fill the canvas as in a field of flowers. The tones range from medium-light to dark and the differential creates organic shapes of greater and lesser definition which remind the viewer of images taken of clusters of galaxies in space photography. The blurred edges also recall the bokeh effect in photography in which out-of-focus areas are deliberately created for aesthetic effect. 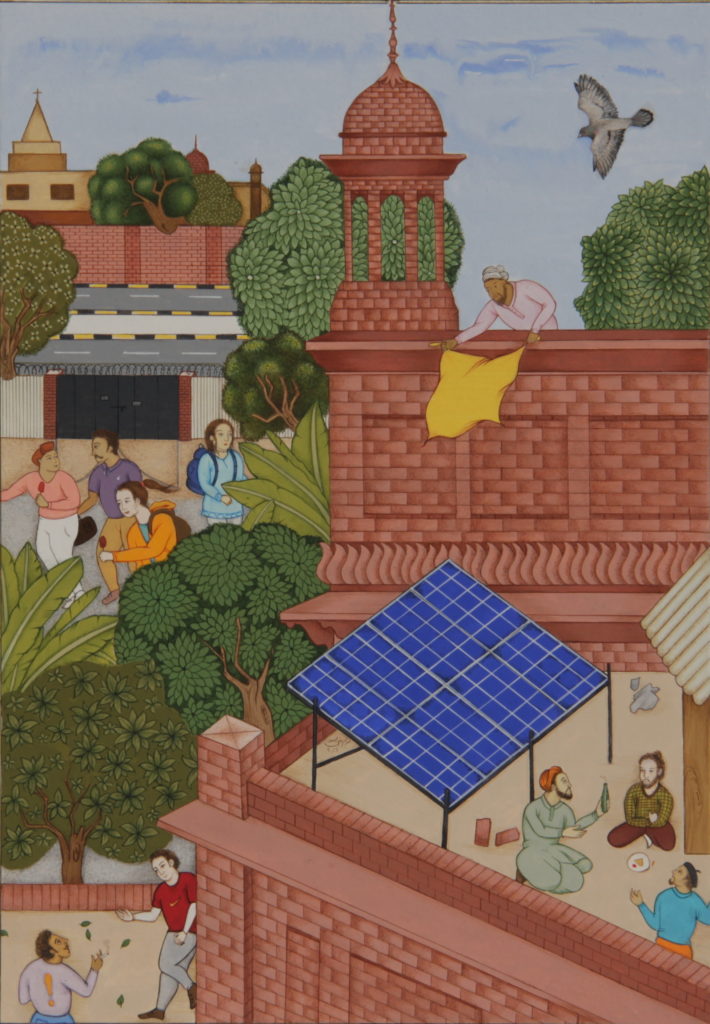 In a couple of works, (Weave in Time II and IV), Marjan focuses on the warp and weft threads that create a soft geometry. The passage of time is implicit in these works that evoke faded glory.

Maryam Banisadr creates miniatures in gouache on wasli paper. Her work gives glimpses of everyday life in Lahore, such as a street scene in ‘Hossein Juice Shop’ and ‘On the Way Home;’ the interior of a classroom in ‘Break Time.’ She uses an elevated point of view to foreshorten perspective and is able to present simultaneous views of inner and outer spaces as in ‘Taste of Ice Cream.’

At this point, it is tempting to pay homage to the art ascribed to Bihzad (1455?-1535?) whose influence on the development of Persian miniature painting was huge. Bihzad was born in Herat in the late Timurid period. He headed the royal atelier in Herat and subsequently in Tabriz under Shah Ismail, the founder of the Safavid dynasty. His innovations to the art of painting are considered to mark the epitome of Persian miniatures. Sheila Canby (curator of Islamic Art at the Met) writes of these innovations: “While maintaining the rational spatial relationships and meticulous depiction of ornamental detail…Bihzad humanised the style by giving his figures realistic gestures and telling looks.”

This humanisation was created by introducing vignettes and individualising figures. Its continuing influence may be seen in the whimsy and freedom that contemporary miniature painting enjoys, of which Maryam Banisadr is one of many practitioners.

Marjan and Maryam Banisadr have reasserted their Iranian identity in their art. Marjan has chosen a traditional subject and innovated with the form of its depiction; she is very conscious of the passage of time and its relationship to memory. Maryam has chosen the traditional form of the miniature to explore contemporary settings of her experience of living in Lahore. Her idiom is rooted in the immediate present rather than evocation of the past. 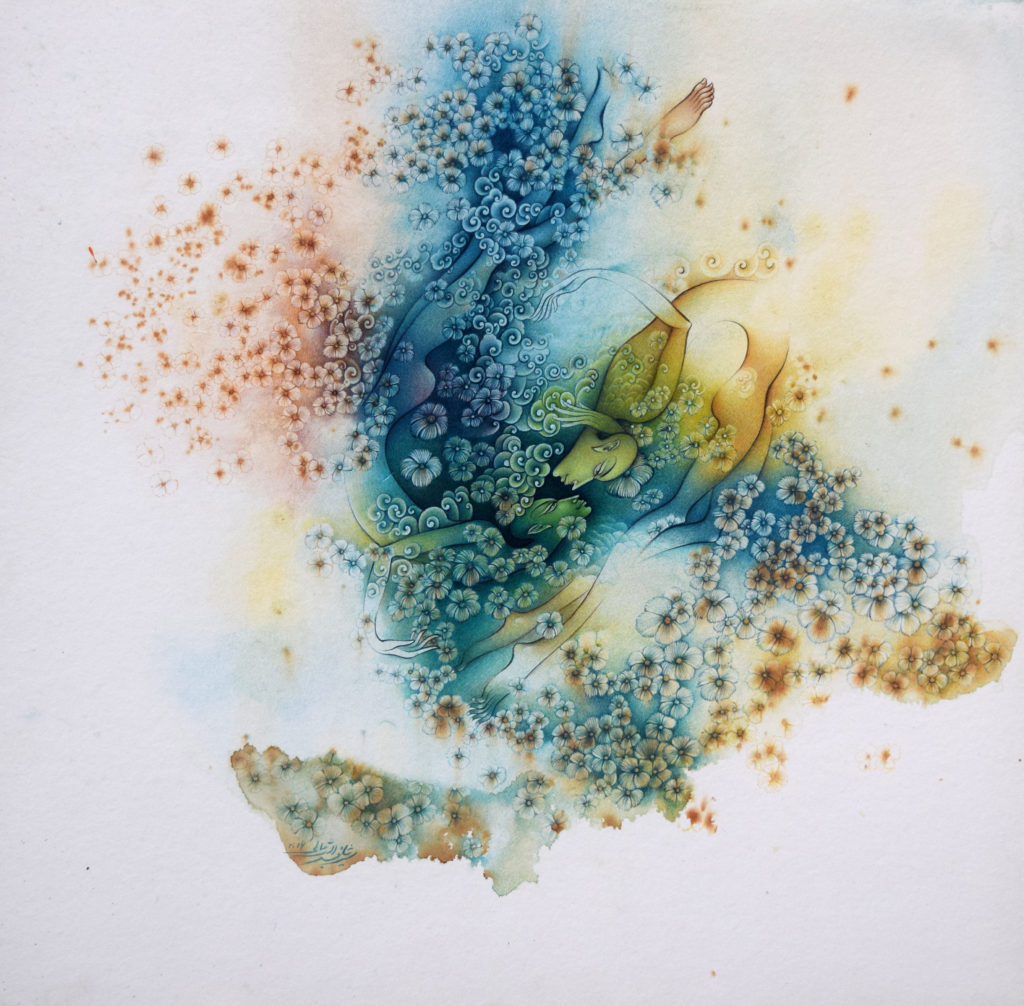 Shah Abdullah Alamee is the third artist in the exhibiting triad. Alamee has trained in miniature painting in Iran and Pakistan and revels in working with watercolour. His community, the Hazaras, originate from Hazarajat region in Central Afghanistan. The rise of militant Islam in Afghanistan and Pakistan, and the cross-border minority status of the Hazara people has led to their persecution, and even genocide.

Alamee has resolved the issue of identity in a unique way by completely dissolving all reference points in his depictions. He paints elongated figures which are devoid of gender or racial characteristics. He calls these representations “the spirit of humanity.” The unclothed figures seem to float and drift against a plain background from which they are barely differentiated by outline alone. Alamee’s painting style of extremely fine gradations of monochromatic colour shows excellent control of the brush.

The elongated figure exemplifies female beauty in Persian miniatures and was modelled on the graceful lines of the cypress tree. Alamee has taken the elongation to an entirely different level where the figures seem more alien than human. It seems he has distilled the trauma of his community into forms that are the very antithesis of personal identity.

From the common meeting ground of Persian traditions, the three young artists explore, dream and discover time, space and selfhood, each in their individual manner.