Mumtaz Qadri’s execution is an indication that something has changed in Pakistan, even if just at the state level, thanks to the callousness of the Taliban and perhaps a nudge from the army. But has the ideology of the ruling Pakistan Muslim League-Nawaz (PML-N) undergone a sea change as well?

After the attack on the Army Public School in Peshawar in December 2014, the state and the PML-N resolved to fight terrorism and the heinousness of the attack gave it the opening to steer a more liberal course.

More recently, the brutal suicide bombing in a Lahore park on Easter, which has claimed 73 lives to date — and counting — and left hundreds more seriously injured, compelled Nawaz Sharif to address the nation. He vowed on air that terrorism would not be allowed to “break our will … I am here to renew a pledge that we are keeping count of every drop of blood of our martyrs; this account is being settled; and we will not rest till it is paid in toto.”

That, of course, remains to be seen.

Despite its anti-Taliban manifesto, the previous Pakistan People’s Party (PPP) government was in no position to reform or liberalise the narrative in Pakistan to fight extremism and Islamism, given the extremist threats to it and its rift with the Establishment after the Kerry-Lugar Bill. This was evident in the muffled defence of their own party members — Punjab Governor, Salmaan Taseer, who was wrongly accused of blasphemy and later murdered, and Minorities Minister, Shahbaz Bhatti.

There is no doubt that times have changed — unexpectedly — and the once unabashedly right-wing PML-N has acquired a new, more liberal avatar. Furthermore, it has remained steadfast in the face of opposition, particularly from the religious right, in regard to its recent decisions that are ostensibly reconfiguring the political narrative in the country.
Back in 2014, the situation was different: the party was reluctant to start a military operation to nab militants — even those engaged in a war with the state. It was only when it was pushed to the corner and the army moved in that an operation was launched to root out militancy.
Much pressure is now on the PML-N, particularly since it is the best placed to utilise its position as a centre-right party to push through the new position — the old, only-Nixon-can-go-to-China template. However, after Mumtaz Qadri’s execution and the passage of the much-hyped Women’s Protection Bill in the Punjab, is the PML-N at risk of losing grassroots support from its conservative voters?

The Pakistan Muslim League-N was part of the conservative Islami Jamhoori Ittehad (Islamic Democratic Alliance) in the ’80s and contested the 1990 elections while still being a part of it, and in opposition to the then left of centre People’s Party. Over the years the PML-N remained a conservative party, and some of its leaders were even alleged to have ties with militants.
But the decision to hang Qadri is a clear sign that the ruling party now wants to push back the religious jingoism that undermines the state and the rule of law. In October, the Supreme Court upheld Qadri’s death sentence. In a ruling that could have far-reaching positive repercussions for the nation, Justice Asif Saeed Khan Khosa of the Supreme Court of Pakistan unequivocally reiterated that blasphemy laws are not beyond critique, found Salmaan Taseer not guilty of committing blasphemy, and upheld the death sentence awarded to Qadri by the sessions court. This is a significant change from 2011, when the district and sessions judge who sentenced Qadri had to flee Pakistan due to death threats.
Recently, the Punjab government (also run by the PML-N) banned the hardline Tablighi Jamaat from preaching in educational institutions like the Punjab University, where they influence, occasionally even coerce, and frequently recruit youngsters to join their ideological cause.

But ultimately, notwithstanding PML-N members like Pervez Rashid, who courageously defended the hanging publicly, and President Mamnoon Hussain, who bravely denied Mumtaz Qadri’s appeal against his death sentence, there are many in the party who are still hesitant to upset the status quo.
Blasphemy accusations constitute a deadly game in Pakistan — those accused or convicted of it are sure to either rot in jail for years, or become victims of extra-judicial murder.
Pakistan’s largest Islamic sect, the Barelvi order, is one of the blasphemy law’s main proponent, but other sects, such as the Deobandi and Ahle-Hadith, also supported the movement to save Qadri, and several religious parties, including the Jamaat-e-Islami (and some PML-N leaders), attended the funeral.
Qadri’s grave has now evolved into a shrine in the space where he alone is buried, and will soon it is believed, become a mausoleum.
Meanwhile, even as Pakistan seems to be charting a new ideological course, the Pakistani state is still accused of using terrorism to seek a strategic edge over its neighbours, particularly India and Afghanistan. The attack on India’s Pathankot base and the blasts near foreign consulates in Kabul, which Pakistani militants have been accused of orchestrating, are just a few cases in point. 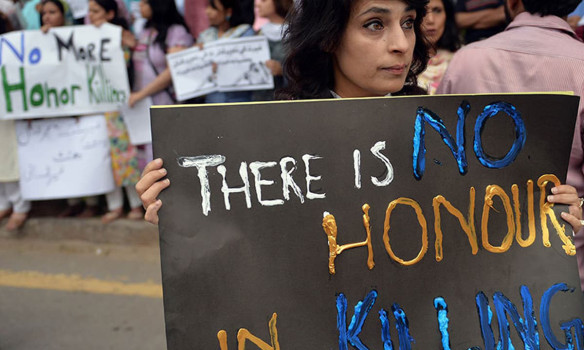 The Barelvis are mostly associated with teaching and preaching, but in the past few years they have used blasphemy as a rallying cry to enhance their popular support base. While this shift does not enjoy the support of the government, Deobandi and Ahl-e-Hadith-enabled militancy remains an important strategic tool for Pakistan. Consequently, these groups reportedly still have the state’s steadfast backing, and shutting down extremist groups within their fold remains unlikely, at least for the time being.

Asia BibiIn the long run, if Pakistan wants to become terrorism and extremism-free, it will have to stop exporting terrorism. The grassroots support and funding for these organisations has to stop. Otherwise they will simply disband and join/form other groups.

The Women’s Protection Bill passed by the Punjab Assembly “hurt religious sentiments” more than anything else in the recent past, but the PML-N leadership stood its ground and defended it both in the media and in the assembly. The bill is far from perfect, but it declares physical, sexual, verbal, emotional and cyber abuse a crime in Punjab. It seeks to redress violence, promises special centres for victims and helps them seek legal aid. A toll-free number will serve as a helpline, special centres will help in resolving disputes and protection from future violence will be provided. Implementing these laws is a challenge, but it is, nevertheless, a step towards empowering women.

That, however, is only if it is allowed to become part of law. Religious parties, including the Jamaat-e-Islami (JI) and Jamiat Ulema-e-Islam-Fazl (JUI-F), have predictably been exerting immense political pressure on the government to withdraw the bill. The Ameer of the Jamaat-e-Islami, Siraj-ul-Haq, called the bill “un-Islamic” and “totally against the constitution of Pakistan.” This is said to have sent the PML-N into panic mode. Eventually, Prime Minister Nawaz Sharif was forced to invite Maulana Fazlur Rehman of the JUI-F for a meeting, and now chances are that he will work out a compromise solution — to the detriment of women’s empowerment and protection — for fear the religious parties will start working on derailing his government through street protests.

There is also the issue of Aasia Bibi’s future. Sentenced to death on charges of blasphemy, the Christian woman, for whose defence Salmaan Taseer paid for his life, still languishes in jail, and in October, after Qadri’s death sentence was upheld, she was shifted to a separate cell since there were legitimate fears about her safety.
Aasia Bibi’s lawyer, Saif ul Mulook has stated that religious groups have launched a “fresh offensive” against her, after the execution of Mumtaz Qadri. Islamabad’s Lal Masjid, among others, is asking the government to execute “the blasphemer Aasia Bibi as soon as possible and not bow to international pressure.” This is worrisome. If internal pressure mounts, the government might be tempted to execute her to regain popular support. But conversely, it risks losing the support of the international community, as well as millions of Christian votes, many of which are cast in the Punjab.

Mass protests or a grassroots movement declaring a party “un-Islamic” can pose major challenges for any party, but for the PML-N, with a traditionally conservative electorate the dangers are even greater. In addition to losing its vote bank, the PML-N faces security threats as well. The PML-N’s nearest competition at the centre and in Punjab is not the People’s Party anymore, but another conservative political party — the Pakistan Tehreek-e-Insaaf (PTI). A street movement against the PML-N could provide the PTI an opportunity to cash in.
Against this backdrop, the fear is that issues like the Women’s Protection Bill and Aasia Bibi’s tribulations will both be relegated to the sidelines — or worse. The meeting between the religious parties and Prime Minister Nawaz Sharif in Raiwind appeared to be a step in this direction. So, the question is, will the PML-N stand up to religious blackmail, or will it kowtow to the right-wing to gain political mileage — thereby taking Pakistan back to the future?