The recently adopted Punjab Protection of Women Against Violence Act will be remembered in history as a measure hailed by women activists with a degree of enthusiasm and jubilation it perhaps does not deserve and denounced by the conservative clerics with a ferocity its contents do not warrant. In a society where violence against women is endemic, the new law is a modest, though path-breaking, effort to offer women victims of, or threatened with, violence a certain degree of protection.

The law aims at enabling a woman who has been subjected to, or is likely to be subjected to, violence to seek relief from a court. This relief can be in three forms: a protection order, a residence order, a monetary order.

As in family matters, the law does not rule out the possibility of reconciliation between the complainant and the defendant and provides for counselling sessions prior to proceedings before the court.

The law-makers have rightly assumed that women generally are not aware of the laws that protect their rights or are not able on their own to access the forums of redress. They have therefore provided for the appointment of District Women Protection Officers and Women Protection Officers to assist them. These officers will be assigned a large number of functions including supervision, coordination and monitoring of the protection system, provision of counselling services, rescue operations for the aggrieved persons, filing of habeas corpus petitions, and assistance to the Protection Committees.

The provision for the creation of District Women Protection Committees throughout the province is an important feature of the law. Each committee will be headed by the District Coordination Officer (DCO) and its members will include six district officials and four non-officials to be nominated by the provincial government (one of whom will be nominated as vice-chairperson). The committee will be responsible for a wide range of functions designed to guarantee adequate implementation of the law.

The law also envisages the setting up of protection centres and shelter homes at the district level. A protection centre will play a key role in enabling women to avail of the legislation’s protection. It is visualised as a “converging point for all essential services to ensure justice delivery, including police reporting, registration of criminal cases, medical examination, and collection of forensic and other evidence.”

The strong points of the legislation are that it marks the beginning of an effort to address the problem of domestic violence in Punjab and enjoys the support of an overwhelming majority of women activists, carries a built-in mechanism for supervision and monitoring of the implementation process, and offers civil society/community  opportunities for overseeing the whole operation. A most welcome feature of the law is the fairly broad definition of violence that includes, besides an offence against the aggrieved person’s body, “abetment of offence, domestic violence, sexual violence, psychological abuse, economic abuse, stalking or a cyber crime.” 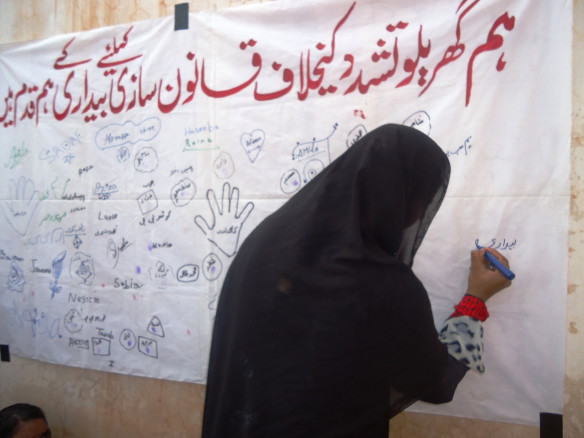 Some prominent defenders of women’s rights have pointed out certain shortcomings in the law. For instance, Khawar Mumtaz, whose case for re-appointment as chairperson of the National Commission on the Status of Women has been pending for two-and-a-half months, has regretted that the law does not match the provisions of the bill adopted by the Senate in 2012 or the Balochistan and Sindh laws on the subject. Hina Jilani, a prominent leader of the Women’s Action Forum and the UN Secretary-General’s first representative for human rights defenders, agrees with Khawar Mumtaz and holds that the definitions given in the Act are not strong and comprehensive enough. While the post-violence protection measures have been fairly emphasised, she says, the law lacks the teeth that could deter domestic violence. Farida Shaheed, a leading chronicler of women’s concerns and UN Rapporteur on cultural matters, regrets the failure of the law’s authors to criminalise violence against women.

All the above-mentioned points are valid and should be borne in mind by the law-makers, particularly when the law is evaluated after some time and the need for a tighter text is confirmed by practice. What needs to be examined on a priority basis is the question of punishing the perpetrators of violence against women. The Penal Code’s chapter on offences against the human body is supposed to take care of physical violence against women but implementation of its provisions is grossly unsatisfactory. The main reason is the anti-woman biases of the police and the prosecution agencies. Parts of the judiciary too are not free from such biases. Besides, the tyranny of patriarchy over centuries and obscurantist interpretation of the scriptures have persuaded a large number of women themselves that their male ‘protectors’ have a right to beat them.

Still, just as sexual harassment at the workplace has been made a criminal offence (Section 509 of the Penal Code), the other forms of violence against women can also be criminalised.

There should be no difficulty in criminalising psychological and economic abuse, as defined in the Punjab Act. Likewise, criminalisation  of physical violence by any male member of the family (father, brother, son, close relative) should also be easily possible. The problem area is physical violence upon women by their husbands and the clerics’ insistence on interpreting the relevant religious injunction far more broadly than reason will permit.

Women’s organisations had reason to celebrate the unanimous adoption of the bill by the Punjab Assembly. They had been working for the enactment of a law on domestic violence for many years and felt frustrated by Punjab’s failure to act in an area in which Balochistan and Sindh had taken the lead. They were also perhaps satisfied that the Punjab Government had taken on board all sections of society, including religious scholars, thus ensuring speedy and complete implementation of the law.

However, this jubilation among the women was perhaps read by the champions of masculinity as women’s freedom from the control of the self-appointed guardians of morality. They accordingly decided, possibly without reading the law, to  raise the cry of ‘faith is in danger’ and condemn the new legislation. They did not bother to specify which of its provisions had invited their holy wrath.

Apparently, the religious lobby has taken exception to the law on the ground that the protection promised to women would undermine peace in the family. The argument has no legs to stand on and is no different than the argument the defenders of feudal values use while denying women the whole body of their rights — the right to education and work and the basic freedoms of association, movement and choice of spouse.

What one can gather from the speeches of the clerics who have attacked the Punjab law is that they are unhappy with two of its sections.

The first provision allows the court to direct the defendant “to move out of the house in case of an act of grave violence, if the life, dignity or reputation of the aggrieved person is in danger.” The provision can be defended on the ground that it is necessary to save the aggrieved person, against whom an act of grave violence has already been committed, from further harm by creating a distance between her and the offender. For the same reason the court can prohibit the offender from visiting the complainant’s place of work (or a child’s school) and from trying to communicate with her. The law also provides for the victim’s relocation to another residence or a shelter home.

The second provision under attack allows the court to direct the offender to “wear (an) ankle or wrist bracelet GPS tracker for any act of grave violence or likely grave violence which may endanger the life, dignity or reputation of the aggrieved person.” The authors of the measure have obviously borrowed the tracker idea from the United States where a number of people — sex offenders, perpetrators of domestic violence, gang members, etc — are supervised by the community through GPS trackers. The provision could be criticised for being difficult to implement or being much too advanced a measure for an under-developed and corrupt society like ours.

Both of these provisions under attack are in the form of concessions to perpetrators of acts of grave violence upon women and criminals who threaten their life. Quite a few laws in Pakistan provide for such offenders to be sent to prison and there was no reason for the authors of the Punjab law to treat them leniently.

The conservative lobby that has threatened to topple the government if the Punjab law is not taken back, or is not amended to suit their whims, have neither reason nor belief on their side. Their strength lies in the inability of the custodians of state power to deal with them according to the law. Unfortunately the government has made itself increasingly vulnerable to obscurantists’ pressure by its policy of pampering and appeasing them. If it persists with mindless pandering to the conservative sections of society,
it will lose much more than its right (and duty) to protect the country’s women.