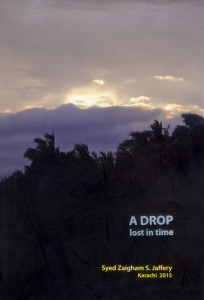 Syed Zaigham Jaffery’s anthology of poems titled A Drop Lost in Time is divided into four parts. Each part is named after one of the four elements, Water, Air, Fire and Earth. These elements function as metaphors for the poet’s emotional state which provides an ineffable but authentic impetus to convert sentiment into cadence. A majority of the 42 poems found in the anthology concern the autobiographical, but non-objective evocation of personal experience.
Zaigham Jaffery’s poetic universe is an Arcadian one and his vision is inherently romantic. There is the self which flows, akin to a river, as it develops a rich patina of memory borne of encounter with an intimate other. Similes with natural imagery abound in the description of love and the lover. There are “rivers of warmth,” scented gardens, fragrance and rain. In Love Nest, he describes a magic carpet ride:
We fly, you and me
seeking verdant scented valleys
with gardens, fountains, fruit-laden trees
love icons all around, tranquility…
Visceral and evocative, the elements of the sub-conscious mind such as dreams and memory play an important role in storing the experience of relationship long after the lover has moved on. The recollection of the moment has great importance for the poet. It enables him to relive the joys he had found in love and to sublimate the pain of loss. The sub-conscious territory of the mind becomes an intermediate space which interpolates between the actual past versus the recall of that experience, which even as it concerns the past, always replays in the present moment. The poet can therefore claim: in pain now, I seek refuge in memory, in dreams and so it continues…
A natural outflow from such recall is the quality of introspection. The poet is engaged in a conversation with himself where discrete parts of his subconscious persona enrich his thoughts. In Eavesdropping, he writes:
All ears throughout the night
It seemed I knew the story…
Then suddenly it dawned
It really was the one
me and myself discussed!
Such introspection is not a product of schizophrenic discourse. Rather, the plurality of inner worlds is what enables imagination to exist.
The Romantic Movement in the first half of 19th century Europe placed emphasis on emotion and individualism for aesthetic possibilities. It sought an escape from the negative effects of burgeoning industrialism.
Jaffery too, has given preference to a romantic sensibility as an antidote to the horrors of violence. Yet, he does not completely avoid its intrusive pervasiveness. The opening poem in the section called ‘Fire’ is Slaughter of Children: Carnage in Peshawar. The poet becomes the grieving conscience of an anguished nation when he uses simile to liken murdered children to roses:
Dark mornings, witness
roses of our gardens
crushed, besmeared
writhing pain in scores
pains that seep the souls,
those that remain alive
scarred for life…
In Our Land, the paradox of “loud silence” is used to describe cold-blooded destruction:
Loud silence
surrounds
the full moon,
draped in flaming black
death dispensed
with smiles.
In this anthology of his poems, Jaffery has invited a select group of friends — many of whom are architects, as he is himself — to contribute an image as an accompaniment to a poem he had sent them. In their contributing role, they have been given the title of ‘Visualisers.’ The Visualisers come from a number of countries and therefore their photographic response to the poems encapsulates an array of multicultural aesthetics.
The poet creates the verbal imagery which, in turn, becomes the seedbed for another person’s response by means of visual imagery. An interesting dialectic develops between the poet and the responder. The format of pairing image to poem creates a cognitive assonance for the reader as if walking into the visual field of someone else’s imagination.
Zaigham Jaffery’s poetry is a gentle drop in a small but impressive pool of Pakistani poets who have written in English, such as Daud Kamal, Maki Kureishi and Taufiq Rafat. Theirs is a liberal spirit of discourse that projects a self-assured individuality. They are comfortable with their personal discomfort because it is the product of a sensitivity that enables verse to exist. The world may be a disturbing and disordered place, but within the inner universe of cadence, there is harmony.