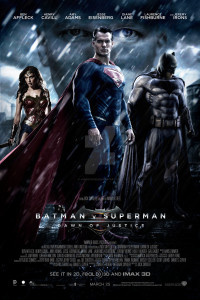 Blame it all on Christopher Nolan. The auteur who helmed the last Batman trilogy purposely tried to make his hero an anti-hero. Nolan’s Batman was dark and brooding, almost as unhinged as the villains he fights. Zac Snyder, a man who loves comic books but, as the director of300, Watchmen and Man of Steel, has never been able to adapt them into decent movies, takes the Nolan baton and runs with it. His Batman V Superman: Dawn of Justice is as bloated and self-important as its title. It runs for an entirely unnecessary two-and-a-half-hours, at the end of which you will be asking yourself: What was the point of it all?

Bringing Superman and Batman together — other than for the money to be earned by the superhero pairing — should serve only the dramatic purpose of two contrasting, iconic figures facing off. Superman is the optimistic, cheery superhero who believes in truth and goodness; Batman operates in the shadows and is grimly pessimistic. For some reason, Snyder decided to make Henry Cavill’s Superman as morose as Ben Affleck’s Batman. Here you have two superheroes who want to save the world but only if they are ever able to lift the weight of the world off their shoulders.

So much of this movie is pointless. We see, for the umpteenth time, Bruce Wayne’s parents being killed and all the angst that gave him. Amy Adam’s Lois Lane exists not so much as a love interest for Clark Kent but to explain plotlines in her job as a reporter at The Daily Planet. Superman and Batman are both moral reprobates, with the former considering letting a busload of children drown rather than reveal his secret identity and the latter introduced when he brands his insignia on a human trafficker and tells him that will get him killed in jail. The contrast between the two is, in the words of one character, that between “day and night” but the sun never rises on Batman V Superman.

In the previous Superman movie, Man of Steel, the superhero had levelled the city of Metropolis, and that scene is now restaged from the point of view of Batman. The caped crusader sees Superman as a threat to his own power and, thanks to the machinations of Lex Luthor (played by Jesse Eisenberg, the one bright spot in this dire film) the two of them are pitted against each other. Whatever the momentum the movie might build is squandered thanks to pointless cameos by the likes of Wonder Woman, shoehorned in to promote the upcoming Justice League crossover movie that will bring in all the characters from the DC Comics universe.

Having a Superman and Batman saga so soon after Nolan ended his Batman series was a mistake. Getting the brooding Cavill and Affleck to play the title characters was an even worse mistake. Hiring Snyder as the director may have been the worst mistake of all.