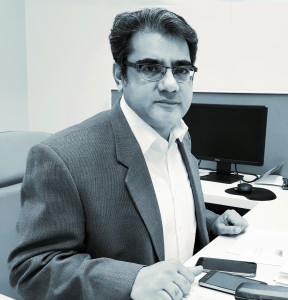 Is the emergence of Mustafa Kamal a repeat of the attempt to splinter the MQM in the ‘90s — a Haqiqi part two?

The emergence of Haqiqi, the quality of its leadership and of its hardcore workers, and the objective political conditions at that time, stand in contrast to the phenomenon we are witnessing today. The ‘92 crackdown on the MQM and the way Haqiqi took over Karachi have no parallel in our politics. At that time, the establishment openly supported dissidents and spearheaded the demolition of the MQM power structure. As a result, MQM’s top tier was forced into hiding, and most of its workers — whether involved in terrorism and crime or not — went on the run. Many of the party’s members and leaders were arrested and pressured to switch sides. The operation sustained its momentum for a long time and resulted in unprecedented bloodletting. The killing spree continued all through the ‘90s and resulted in thousands of casualties.

Mustafa Kamal and his team members do not have the kind of stature within the party which the duo of Afaq Ahmed and Amir Khan enjoyed in their time. In the ‘90s the MQM was at the zenith of its power and radicalism. It had an iron grip on the city and it evoked fear in the hearts and minds of rivals. But with time, the party and its leaders have mellowed down and changed tactics — because of both, internal and external factors. The most recent factor is the Karachi Operation.

The ‘90s challenge was the biggest external challenge the MQM faced after the split. Today, it is more about conquering internal ghosts stemming from an aging leadership, and managing the discontent within its ranks.

What are the similarities and differences between what is happening now and what happened during the ‘90s?

There are more differences than similarities, but let’s take the three apparent similarities first. In the ‘90s, the MQM was being portrayed as an absolute villain, just as it is today. The vanguard of the attack against the MQM — then and now — comprised/comprises disgruntled dissidents. The dissidents of that time made more or less similar allegations against their party, specially targeting its supreme leader, Altaf Hussain, as is being done by the new generation of rebels.

The biggest difference today meanwhile, remains that the MQM enjoys political space to operate, which was denied to it during the initial years of the ‘90s operation. At that time, the entire party was virtually made inoperational. Today it is being allowed to carry out its political activities unhindered. This is a good omen for Pakistani politics.

In the ‘90s, there was an attempt to oust the MQM from the political process by a blanket crackdown on its rank-and-file and by propping up its rivals. Today, only those are being targeted who are allegedly involved in crime, terrorism and under suspicion of having links with the Indian intelligence agency, RAW. Today, the MQM is not facing the kind of political heat and the fury it faced in the ‘90s.

Do you think there will be more ruptures in the party and its vote bank?

This time again, a number of MQM leaders, including lawmakers, may switch sides. Some of them have already joined the dissident camp, but these defections are unlikely to dent the MQM vote bank. As long as Altaf Hussain is holding fort, the bulk of MQM workers, supporters and the party’s organisational network will stay with the mainstream party.

However, the post-Altaf Hussain scenario remains a question mark. The future of the party will depend on how it manages to make the transition in its leadership in the post-Altaf days, and on how it adjusts itself in the future politics of urban Sindh, especially Karachi, where there has been a sea-change in demographics.

Do you think Afaq and his group could also benefit from this turn of events? Will people from the party join them and gain support from the MQM vote bank?

Afaq Ahmed has been around for more than two decades now. During this period, his group has shrunk rather than expanded. In fact, even in its hey-day — when the Haqiqi faction had all the support of the establishment — it was routed in the 1993 general elections, even though the MQM had boycotted the National Assembly polls. It was routed again in the 1997 elections. Since then, the Haqiqi has only lost ground to the MQM.

One of its major dissident leaders — Amir Khan — is back in the mainstream MQM fold along with his loyalists. As Afaq Ahmed was not allowed to operate freely since 2002, his group has not been able to induct fresh blood into his party ranks, and in recent months, many of his close associates have left him because of his alleged soft stand on the MQM. His loyal militants and supporters have grown old like their leader, and now although Afaq Ahmed is holding on to his small domain — if one can call it that — he is unlikely to make it big again on his own.

How do you view the future of the MQM, and what impact will the current state of affairs and how they develop, have on the people of Karachi?

The MQM faces challenging days in the near- to mid-term. Its long-term prospects depend on the kind of choices the party makes today. The era of the 1980s and 1990s politics is over. The real challenge for the party doesn’t come from Mustafa Kamal, but from its own politics and internal dynamics. This includes firstly, Altaf Hussain and his future role and the planning for the transition of the MQM leadership, which is inevitable, whether sooner or later.

Secondly, the MQM must close its doors on criminals who operate under its banner. The party says that it has already done a lot in regard to this issue in recent years, but it must succeed in this effort.

Thirdly, the allegations of ties of some of its leaders with RAW are very serious. These allegations must be probed by the concerned authorities. A closure of the case remains in MQM’s own interest. A vast majority of the MQM leaders, workers and 100 per cent of its voters do not harbour any agenda of advancing the interests of the enemy country. This majority needs to prevail so that the MQM continues to play its role as a party of the urban middle and lower middle classes.

And lastly, the MQM must work hard to evolve into a multi-ethnic party — representing all urban communities. If we want to see peace, progress and prosperity in Karachi, its politics must be multi-ethnic and issue-oriented.

Has Mustafa Kamal been propped up by the security establishment, as is being alleged?

Yes, such speculation does exist. It can be true, partially true or entirely false. But past experience shows us that only those leaders prevail and make their mark who are connected with the people. I think we shouldn’t speculate at this juncture. Everyone has a right to leave a party, make a new one, or join some other. No establishment can create leaders with the snap of its fingers. It can support one political group or the other, but in the end, it is the leader and the masses who matter.

The ongoing Rangers-led Karachi operation has ensured that the days of organised militancy are over. So I don’t see a repeat of bloodletting between MQM loyalists and dissidents.

However, Mustafa Kamal and his team face the tough task of establishing their political credentials. But they will have to really slug it out for years to make their mark. It is not just Karachi, but all of Pakistan that awaits a committed, honest, pro-people, visionary leader.

It is widely perceived that with the Rangers operation against the MQM in progress, there is a danger that all the party’s criminals will take refuge in Mustafa Kamal’s party. Do you agree?

This possibility cannot be ruled out. Some leaders in the Mustafa Kamal group do have cases against them. It will be a challenge for him to keep the criminal elements away — in fact, he is already flanked by some such people. Mustafa Kamal needs to start clean rather than banking on tainted colleagues.

This interview was originally published in Newsline’s April 2016 issue.