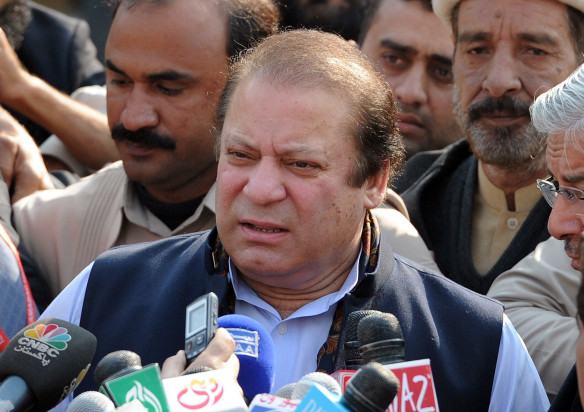 The ruling PML-N government has had a lot on its plate since the turn of the year. For the Pakistan Muslim League- Nawaz (PML-N) the year began with question marks over the National Action Plan (NAP) following the alleged Jaish-e-Muhammad (JeM)-led attack on the Pathankot airbase in India on January 2, and the Bacha Khan University attack on January 20. The government followed this up with antagonising PIA workers over an opaque privatisation manoeuvre, which culminated in the killing of two protestors on February 2. Then came the National Accountability Bureau’s (NAB) March 31 deadline for the verdict over corruption cases against senior PML-N leaders, including Prime Minister Nawaz Sharif and Punjab Chief Minister Shahbaz Sharif.

“The NAB is harassing government officers. The bureaucrats are now afraid of taking decisions because of the harassment. NAB terrifies the government officers, preventing them from performing their duty,” said PM Sharif while addressing PML-N local body representatives in Bahawalpur. “NAB officials enter houses and offices of innocent people without verifying any charges against them,” he said, adding that the matter has been brought to the notice of the NAB chairman, Qamar Zaman Chaudhry. “He should take notice. Otherwise, the government will take legal action in this regard,” said Sharif. 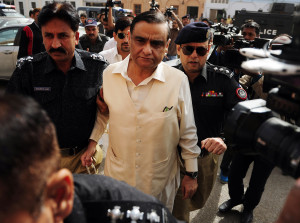 Most of the “mega corruption” cases against PML-N leaders being investigated by NAB were initiated over 15 years ago during Pervez Musharraf’s rule. The PML-N camp says these cases were initiated to further politically marginalise the party after the Musharraf-led army had overthrown the elected government in the 1999 coup.
The two biggest cases against the prime minister include the misuse of authority vis-a-vis the construction of Raiwind Road which leads to the Sharifs’ residence at Jati Umra, Lahore, and making illegal appointments in the Federal Investigation Agency (FIA). The Raiwind Road case alleges misappropriation of up to Rs. 125 million.
In the list of almost 50 PML-N leaders accused of misappropriating funds, prominent are Federal Finance Minister Ishaq Dar, Punjab Education Minister Rana Mashood, Punjab Governor Rafiq Rajwana, Deputy Speaker Punjab Assembly Akhtar Gorchani and Punjab Law Minister Rana Sanaullah.
Shahbaz Sharif’s sons, Hamza Shahbaz and Salman Shahbaz, have also been charged with amassing illegal assets, leasing government land for their business and stealing funds from the money allocated for the construction of a bridge on the River Chenab.
Rajwana has been accused of embezzling over Rs. 1 billion in purchasing the land for Bahauddin Zakariya University’s Lahore campus, as its legal advisor, while Gorchani has also been charged with stealing state land.

“What’s bothering the PML-N leadership the most is that projects like the Metro Bus, the Orange Line Metro Train, LDA City and the Pakistan-Qatar LNG deal are being interrogated,” says a NAB official. “The PML-N founded its 2013 election campaign on construction, transportation and energy — and it looks to do the same ahead of 2018. So if any embezzlement is proven in regard to the PML-N’s poster projects, it could make a dent in their election campaign.”
The official believes the government is beset by insecurity and paranoia. “The prime minister seems to be most upset over the NAB chairman not allowing any government interference in its work. This could be owing to Sharif’s concerns regarding the establishment’s backing of NAB to streamline the cases against the ruling party, which he believes are aimed at gaining further political ground and marginalising the civilian government.” 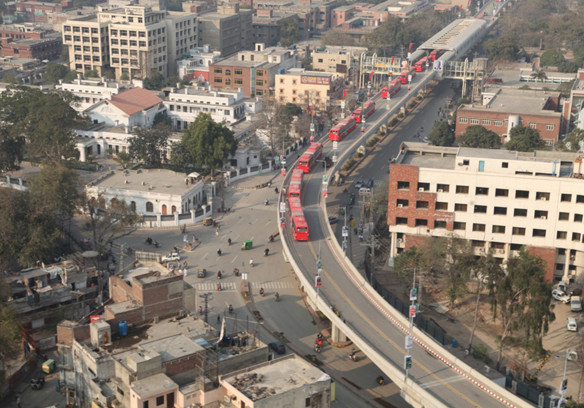 NAB is investigating corruption charges in the Metro Bus projects in both Lahore and Rawalpindi and the Orange Line Metro Train. Additionally, the Accountability Bureau is investigating corruption in the purchase of escalators for the Rs. 30 billion worth Lahore Metro Bus project. And a ‘contractor’ arrested for questionable practices has alleged “corruption of millions of rupees” in the Rs. 165 billion Orange Line project. Misappropriation in the construction of water filtration plants and the purchase of dengue spray is also being examined.
Opposition leader Khurshid Shah says the NAB controversy has laid bare PML-N’s “double standards” when it comes to accountability in the Punjab. “NAB obviously saw some irregularity — which is what it is probing in the Punjab,” he says. He elaborates, “Secret deals have been made to export LNG, which will affect Punjab’s coal-based power projects. And 15,000MW electricity could have been generated, if the government had spent some of the revenue earmarked for the China-Pakistan Economic Corridor (CPEC) on the Bhasha and Munda Dams.”
Pakistan People’s Party (PPP) Co-Chairman Asif Ali Zardari joined the accusation and counter-accusation fray, saying that the FIA was doing the same against the PPP as NAB with regard to Dr. Asim Hussain. “Mian sahib, not only NAB, but your FIA is also doing the same job. Dr. Asim is not involved in corruption, and one of your ministers has also conceded this,” he said while talking to the media.

According to reports, the PML-N is currently mulling an amendment to the accountability law to halt the NAB’s juggernaut.
Meanwhile, Pakistan Tehrik-e-Insaf (PTI) Chairman Imran Khan said his party will oppose all efforts to weaken NAB. “NAB should be independent and impartial. We have formed an accountability cell in Khyber Pakhtunkhwa, which is not subordinate to the government,” he said while talking to the media. “PTI’s primary objective is to eliminate corruption, and the accountability cell will take action against whosoever commits it.” Khan further revealed that a committee, which he would head himself, has been formed for amendments in the Accountability Commission.

Pakistan Muslim League-Quaid (PML-Q) leader and former Prime Minister Shujaat Hussain believes the government is trying to create an unconstitutional body over NAB. “They are trying to rid themselves off corruption cases, but PML-Q will never let the ruling party commit such a crime. We will strongly oppose it,” he said, contending the institutional autonomy of NAB should be maintained. 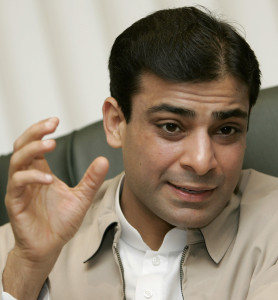 Federal Information Minister Pervez Rashid says PML-N has nothing to fear and is not against accountability. “The accountability trial should begin after considering whether or not there is enough evidence in a case for a successful trial in the court,” he said. “Yes, we have our reservations, but the party leadership has never said the process of accountability should be stopped. Any legislation on accountability will be done with all political parties’ consensus.”
PML-N insiders reveal that the senior party leadership is trying to woo both the PPP and Jamiat-e-Ulema-e-Islam-Fazl (JUI-F) to ensure that NAB does not transcend its constitutional limits. “This is why the ongoing clash with the religious parties over the Women’s Protection Act has come at a bad time for the party,” said a PML-N official, off the record.
Fazl-ur-Rehman, the JUI-F chief, has spearheaded the religious parties’ opposition to the Punjab Protection of Women against Violence Act 2016 — popularly known as the Women Protection Act (WPA) — passed by the Punjab Assembly in February. In a meeting at the Jamaat-e-Islami’s (JI) Lahore headquarters in Mansoora, a religious parties’ conference declared that the WPA is “un-Islamic” and against the Quran and Sunnah.

Pakistan Ulema Council (PUC) Chairman Tahir Ashrafi, who is spearheading the government’s committee of religious scholars to propose amendments to the WPA, suggests Fazl is playing politics over the Act. “He says one thing during the meeting with the prime minister and says a completely different thing when he is sitting with religious party heads. It’s obvious he is trying to get the most political mileage out of the situation.” 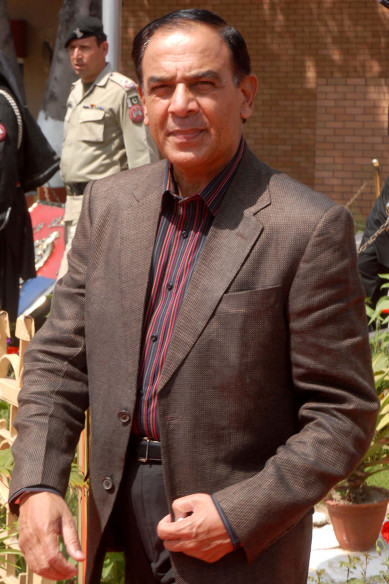 The PML-N official said that the execution of Salmaan Taseer’s murderer Mumtaz Qadri has also affected the party’s bargaining power, with religious parties’ reacting negatively to the verdict. “The religious parties have already begun to create issues over many recent government decisions and have been accusing the PML-N of westernising Pakistan,” he said.
And PPP insiders claim that their party is more than willing to join PML-N in passing the needed amendment to the accountability law to keep NAB in check. “The ruling party might just have realised the degree of NAB’s interference after the bureau took up cases in Punjab, but it does not mean that the concern is wrong,” a PPP official said. “We are all for accountability, but everyone should be equally accountable under the law. It’s not just the politicians who should be interrogated.”