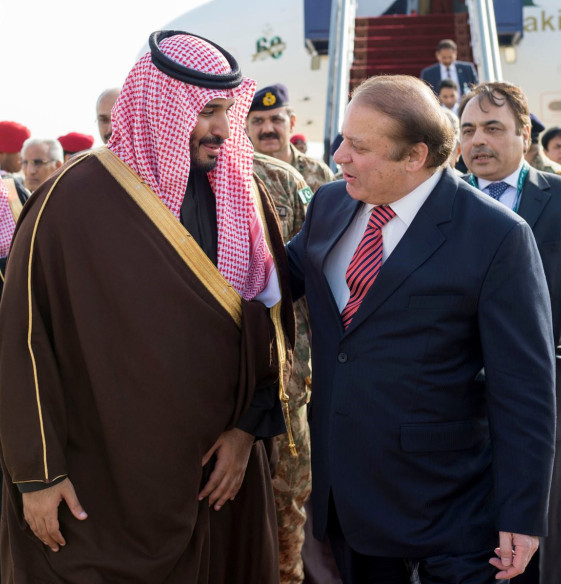 On December 15, 2015, Saudi Arabia announced that Pakistan is part of a 34-state Islamic military coalition created to combat terrorism. “[There is] a duty to protect the Islamic nation from the evils of all terrorist groups and organisations, whatever their sect and name, which wreak death and corruption on earth and aim to terrorise the innocent,” read the official Saudi statement, as quoted by the state news agency SPA.

It took Pakistan nearly a month to officially acknowledge its participation in the alliance, with a foreign affairs advisor confirming it during an in-camera briefing to the Foreign Affairs Committee on January 12. Two days before Sartaj Aziz made a public announcement of the fact, Prime Minister Nawaz Sharif had told Saudi Defence Minister and Deputy Crown Prince Muhammad Bin Salman that Pakistan would support the kingdom if there was any threat to its “territorial integrity.”

The Saudi prince’s visit to Pakistan had come amid escalating tensions with Iran, after Riyadh executed 47 “terrorism convicts” on January 2, including Sheikh Nimr al-Nimr, a renowned Shia cleric. Al-Nimr had famously led a pro-democracy movement in the Eastern Province, and was revered by Shias all over the region.

On February 15, Pakistan joined around 20 of its allies in Riyadh for military exercise ‘North Thunder,’ which was “one of the largest, most important military manoeuvres ever staged in the region” according to SPA. On March 12, both PM Sharif and General Sharif attended the military parade held in Hafar-ul-Batin at the conclusion of the ‘North Thunder’ exercise.

Pakistan Today’s former Middle East correspondent, Shahab Jafry, says Pakistan needs to tread very carefully in the Middle East. “I’m not sure there is a role for Pakistan to play in the region,” he says. “There was a lot of talk recently — though only at home, not in the Middle East — that Pakistan might help bring Iran and [the Kingdom] together. But that clearly didn’t happen.”

Jafry says it’s best for Pakistan to concentrate on its own problems. “If a Gulf coalition is, for some reason, considering defeating IS, it should not have helped create and empower it in the first place,” he maintains. “IS became entrenched in Syria/Iraq because the Saudis encouraged/funded/armed the rebels; the Turks let them into the country; and Nato turned a blind eye so long as Damascus was under pressure. There is nothing to suggest, so far, any sincerity about the Saudi coalition. In fact, it was only hastily put together when the Syrian regime, with Russian help, etc, was encircling the last strong IS stronghold.”

Michael Kugelman, Senior Associate for South and Southeast Asia at the Woodrow Wilson International Center for Scholars, says the best role Pakistan can play in the Middle East conflict is one of strict non-involvement. “This is certainly easier said than done, given Pakistan’s geographic position and its close ties with the Saudis, along with its substantive relations with the Iranians,” he says. “To this point Pakistan has done an admirable job of not letting itself get dragged into the conflict. The problem is, the more it resists Saudi entreaties to join its cause, the more the Saudis will push. The good news is we can assume that the civilian leadership, the military, and public opinion are for the most part on the same page in this regard in Pakistan. They all take a position of staying out of a conflict they have no business getting dragged into.”

Why has Saudi Arabia constantly wooed Pakistan to become part of this coalition?

“In terms of military strength, Pakistan and Turkey are by far the strongest armed forces in the region,” says defence analyst Khalid Muhammad, who is the author of Agency Rules. “Many would like to think the Arab states, with their US hardware, are stronger, but it is Pakistan that brings skill and experience to the battlefield, from the soldier to the commanders and generals that mastermind the strategy.”

Muhammad says that Saudi Arabia, being the head of the coalition, will supply the weaponry requirements for the fight. “That’s not to say that Pakistan won’t bring its own armaments to the fight, but the bulk will come from the Saudis.”

“We all know that the Saudis don’t like the Iranians, but when we are talking about fighting IS, the Iranian army has been a wrecking crew. The alliance that the Saudis have built is more about keeping the constraints of ideology and sectarianism alive, rather than putting the most effective force on the battlefield.”

Kugelman isn’t sure such a coalition can do much to weaken, much less defeat, IS in the first place.

“You’re not going to eliminate IS by raining bombs down on it — that’s something that the Americans, the Europeans, and the Russians alike need to take to heart,” he says. “You can only eliminate IS if you eliminate the ideology that fuels it — and that’s no small task. This will involve doing everything from changing the texts of school textbooks to cutting off funding sources. And there’s no reason to believe that the Saudis or anyone in their coalition will be interested in doing this type of work.”

Kugelman continues: “In fact it’s unclear if anyone, anywhere, is in a position to do this type of work. But this is the crux of the problem: defeating IS will require carrying out a comprehensive set of policies far beyond airstrikes and other military actions, and it’s unclear if anyone is up for this task.”

Muhammad agrees. “Militarily it is easy to beat IS, because they are not an armed force, but a mercenary one. [But] they are using an ideology that reaches emotions and draws potential fighters. This has been the problem with the War on Terror since the beginning,” he says.

“Winning a military battle to lose it in the chambers of power because of ill-planning or ineffective execution, is much more problematic than winning the fight on the ground. Terrorism can only be defeated when you counter and eliminate the ideology that recruits, mobilises and drives the fighters.”

Muhammad says the coalition needs to make sure that while they are fighting IS in the Middle East, they don’t have an end-around, or escape route, back to Iraq. “That can only be limited by a coordinated air and ground campaign by the coalition forces, or including Iran. We’ve seen the coordination thus far with the first coalition that was installed at the beginning of the Yemen conflict, I’m very fearful if the Saudis are able to play the same role, they will make victory difficult with Iraq and Afghanistan close by.”

Muhammad points out that Pakistan played a key role, along with Turkey, in calming Saudi-Iran tensions. “Does Pakistan need to play this role again? I think so,” he states.

Jafry doesn’t see what Pakistan, in partnership with any other country, can do for the Middle East in this situation. “Turkey was going pretty good actually till it [involved itself in] Syria. It’s instability, terrorism, investment outflow, lira nose-dive, all owe to its president reading the situation completely wrong and being too inflexible to adjust, just like the Saudis, when things began changing.”

Kugelman says Turkey may be the world’s most serious powder keg to emerge in recent years. “Pakistan is wise to build up its relations with such a strategic regional neighbour, but it will need to be careful not to get drawn into Turkey’s problems. Pakistan has enough challenges to deal with at home, and the last thing it needs is more distractions at best, and more threats to its security at worst.”

Muhammad maintains that Pakistan’s priority should always be solving the problems at home. “I do believe that the Pakistan armed forces have made significant gains against the terror groups that operate in the country through Zarb-e-Azb, the Karachi operation and other intelligence-based operations throughout the urban centres of the country,” he says. “Having said that, I personally don’t like the idea of our troops being in a long-term commitment to fight IS in the Middle East, when we could be facing that problem here at home very soon.”

He adds, “Part of our nation’s problem is that we have strong, well-tested armed forces. They are in high demand in all the Muslim countries when they are in trouble. But we need to take a considered position on our troop and time frame commitment to the Saudi coalition.”