On March 18 last year, a meeting of the Council of Common Interests (CCI), chaired by Prime Minister Nawaz Sharif at the PM House, decided that Pakistan’s sixth population census would be held in March 2016. The last one was held 16 years ago, in 1998. It was also decided that both the population and housing censuses would be held simultaneously, with the costs being shared by the provinces.

On November 2, Habibullah Khan Khattak, Chief Census Commissioner of the Pakistan Bureau of Statistics (PBS), said preparations were underway to initiate the 19-day process from March 28, 2016 onwards. “Rs. 14.5 billion have been allocated by the government for the census,” Khattak told the media. “As per CCI’s verdict, the census will be held under the supervision of the armed forces.”

Pakistan has been divided into 162,921 census blocks, with each block consisting of 200-250 houses. “All provincial bureaus of statistics have been taken on board,” Khattak said.

In February, with just a month to go before the scheduled census, reports began to surface that the CCI was likely to postpone the census.

“The over 166,801 census blocks need at least 375,000 soldiers, which the Pakistan Army cannot spare at the moment. This is what we’ve been told,” said a PBS official.

Furthermore, provincial census commissioners have also raised concerns that they have not been given the requisite authority, which is concentrated solely in the hands of the PBS.

Taj Haider, General Secretary, PPP Sindh, put forward a 14-point resolution which claimed that “the population count of Sindh was lower than its actual population.” The biggest concern put forward by the APC was the migration of people, which is affecting the country’s provincial demographics. The APC suggested that immigrants should be ‘properly numbered,’ with the centre providing compensation for ‘the additional financial burden’ and making arrangements for ‘illegal immigrants from across the border.’

The APC further called for equal provincial representation in PBS’ governing council, along with giving the provinces more authority with regards to monitoring the census process. “We won’t let the federal government run away by presenting any excuses,” Qaim Ali Shah remarked, adding that the census would not be allowed to be postponed “at any cost. We would raise the issue in the upcoming CCI meeting.”

Before the scheduled CCI meeting, PBS officials said it was “impossible” to organise the census. “It is likely to be delayed if the required security is not provided,” chief statistician Asif Bajwa told the Senate Standing Committee on Finance before the CCI meeting, adding that conducting the census in phases would not be possible. 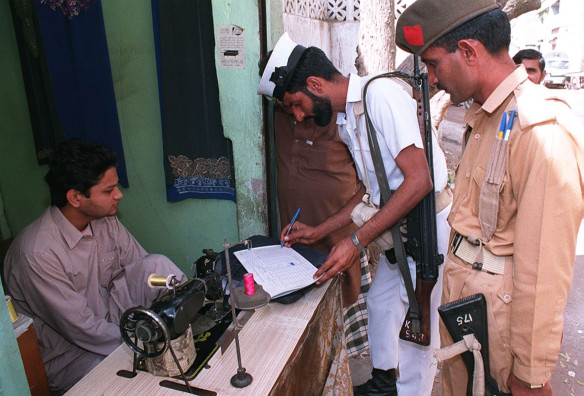 On February 29, the CCI postponed the census for an ‘indefinite period.’ Prime Minister Nawaz Sharif chaired CCI’s first meeting in the year, which was attended by all provincial chief ministers. “The armed forces cannot spare the personnel needed because of their commitments in the [ongoing] military operations,” Statistics Division Secretary Shahid Hussain Asad told the CCI. “Keeping in view the fact that the army officials won’t be available for the census exercise, the census cannot be conducted.”

On March 15, Rana Muhammad Afzal Khan, the Parliamentary Secretary Finance, told the National Assembly that the army had requested a postponement of the census due to the military’s other commitments.

Adnan Aamir, editor of Balochistan Voices, holds a different view. “The official reason cited for the delay was the non-availability of military personnel, but in reality it was the concerns of the Balochistan government,” he says. It has to do with the presence of Afghan refugees in the province. “Baloch nationalists fear that if a census is conducted in the presence of Afghan refugees, it would turn them into a minority in their own land. But Pashtun nationalists and the JUI-F in Balochistan are all in favour of holding the census in the present circumstances,” says Aamir.

In his view, “The census controversy in the province cannot be resolved until and unless a formula is devised to prevent the inclusion of Afghan refugees with fake Pakistani CNICs in the census. This would require huge political will on the part of the current Balochistan government, which it apparently lacks.”

PBS officials, meanwhile, claim that there is no mechanism in place to sift Afghan nationals from the locals.

The Sindh United Party (SUP) President, Syed Jalal Mehmood Shah, who heads the Sindh Census Population Committee, calls for transparency in the holding of the census.

“The federal government’s Punjabi lobby wants to manage Pakistan’s resources on the basis of fake population figures,” he says, adding that a transparent census would reduce Punjab’s share in the federal divisible pool.

Shah says Prime Minister Nawaz Sharif acts contrary to the ‘spirit of the federation,’ claiming that the PM’s sole focus lies in serving the interests of Punjab. “Sindhi people would neither accept any outsiders’ usurpation of their rights or misappropriation of their resources,” he asserts.

An army official, who presently serves in Shawal, says government officials shouldn’t be speculating over the military operation’s schedule. “It’s too early to say when the operation in the Shawal Valley will be completed, but I don’t think it’s a matter that should be speculated upon,” he says. “We are in a state of war, and nothing should be higher on our priority list than the successful completion of Zarb-e-Azb and the total eradication of terrorists.”

The army official says the location of the Shawal Valley on the Afghan border — at the intersection of North and South Waziristan — makes it even more critical. “And we still have terrorists holed up inside the valley, which, militarily speaking, is a tough nut to crack,” says the official.

Pirzada claims that the population census draft is ready. “The framework for the census, and other details were finalised in the previous CII meeting, with the consent of all provinces. Now we are just waiting for the army’s green signal.”