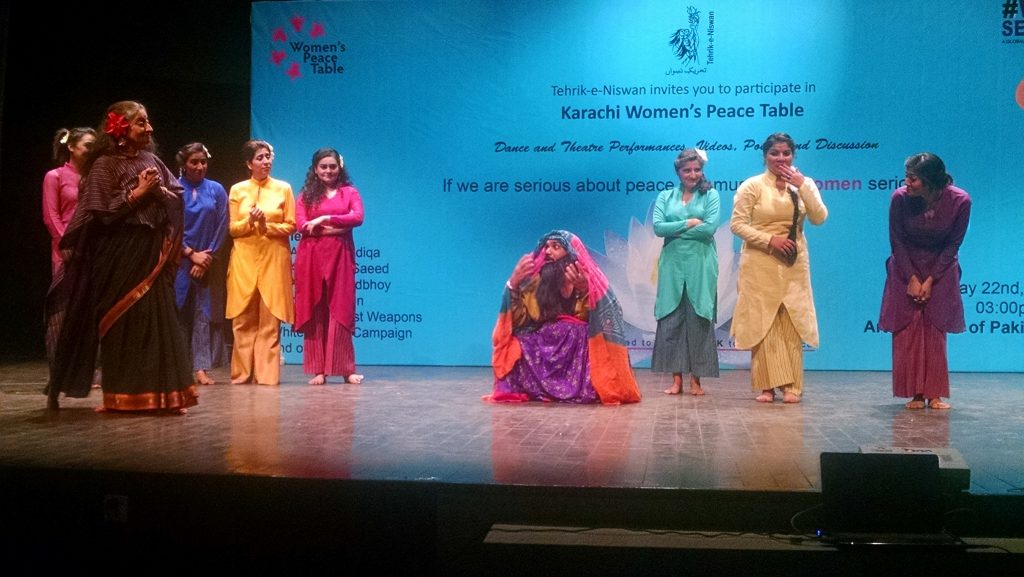 Women were, quite aptly, the centre of discussion at the Karachi Women’s Peace Table held on October 22, 2016. The event, held at the Arts Council of Pakistan was organised by Tehreek-i-Niswan, with the support of the Pakistan Institute of Labour Education and Research (PILER). The three-hour seminar was a mix of poignant talks, punctuated with powerful dance performances, poetry and skits, all focused on the trials, tribulations and strength of women. The session opened and closed with a recitation of poetry by one of Urdu literature’s foremost living writer, poet and feminist, Fahmida Riaz.

“This is the second time the Karachi Women’s Peace Table is being held,” said Sheema Kirmani in her introduction, adding that similar Peace Tables are taking place all over the world in the same month. The events are held to make women part of the peace process, and this year they introduced a new element to the proceedings: the presence of men.

Political activist Kaleem Durrani explained that the equal participation of women in all walks of life ought to be a concern for men as well. He gave the example of women’s courage and endurance even at the grassroots level when their menfolk disappear, as he introduced Hani Baloch, whose father, Wahid Baloch, has not been seen or heard of since he was picked up by the authorities three months ago. She narrated the pain of his disappearance on the whole family and talked about her appeals for producing him in court.

Social activist Dr Azra Talat Syed said thousands of households across the country shared Hani’s experience as practically all the provinces were in a state of war. She said women were being killed politically, economically and in the name of religion, especially in Balochistan, FATA and Khyber Pakhtunkhwa (KP), she added that 3,000 Hazara women in Balochistan had been reduced to prostitution, and it was no different in KP because their entire way of life and livelihood had been destroyed due to the activities of militants and the operations against them.

Umer Farooq, the leader of the local White Ribbon Campaign — men’s movement for ending violence against women — spoke of the group’s advocacy work among men. He said invariably, the men in the communities would not speak, saying it was not their issue. Citing figures from a survey they conducted, they found even in a city like Lahore, 71 per cent of the men felt women should be kept in their place with a few slaps. This view, he said, was even shared by the head of the sociology department of a leading local university, who had a PhD from the US. Farooq emphasised that the country’s educational curriculum needed revisiting as it re-enforced gender stereotypes, and should be replaced with one that was ideologically more sound for the next generation.

Representing Citizens Against Weapons, author Rumana Hussain said her group had written to 1,200 parliamentarians regarding their concern about 20 million civilians having arms, and the ready distribution of arms licenses by the parliamentarians themselves. Not a single one responded. She hoped the idea of building pressure to deweaponise society would spread to all spheres of life. Hussain also referred to how the trend of women getting ahead in assorted fields was shaking the patriarchal base.

Scientist and activist, Dr Pervez Hoodbhoy, maintained that the idea of the role of women just as wives and mothers belonged to the Stone Age. However in today’s world of machinery and full automation, he said, the women could not be regarded as the weaker sex any longer.

Defence analyst and author, Dr. Ayesha Siddiqa spoke of the militarisation of society in which women were being robbed of their humanity and undergoing complete changes in their nature. She maintained that such militarisation warps the way people think, turns them into cowards, and paralyses them so that they cannot raise their voice. She said there was a great need to examine feminist thought and theory in international relations and politics, which is based on care for others – the human concern factor.