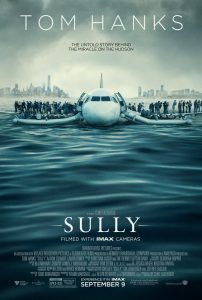 When Captain Chesley Sullenberger landed his plane on the Hudson River in New York and saved the lives of all 155 people on the plane, he became a folk hero. Known by his nickname ‘Sully,’ the captain of US Airways flight 1549 is certainly deserving of the biopic film on him that was recently released bearing the same title. And perhaps no one but Tom Hanks could have done the role more credit.

After birds struck the engines of Flight 1549 that fateful January day in 2009 and it became clear that the plane was slowly losing altitude and power, Captain Sullenberger determined within minutes that his plane would be unable to make it to any of the nearby airports. The only option, he decided, if there was any chance of survival for his passengers and crew, was to land the Airbus in the Hudson river, between the Manhattan and New Jersey shoreline.

The entire episode — from beginning to end — took only a brief few minutes, so turning the events into a full-length feature film must have been a formidable proposition.

Clint Eastwood, the director of the movie, used material from the post-crash investigation commission, Sully’s piloting career, and the events of the time the film is placed in, to beef up the story. The result: a languidly paced film, with a slow burn — and some information not widely in the public ken. Throughout the film, the commission constituted by the United States’ National Transportation and Safety Bureau (NTSB) is seen trying to determine whether Sully did the right thing by ditching his plane in the river. They try to assess if there was any possibility that he could have flown his damaged plane to one of the airports around New York City, and in the process determine whether he is capable of continuing with his pilot’s job.

Along with the vignettes on the NTSB commission’s proceedings, the film features Sully’s worried conversations with his wife about his future, nightmares Sully has of his plane crashing, effectively recreating the imagery of 9/11 for any viewers who care to remember, flashbacks of his first flights as a young pilot, and his Air Force days. Also captured on screen are three of the pilots visualisations of that fateful flight that ended in the Hudson.

‘The Miracle on the Hudson,’ as the US media dubbed the ditching of Flight 1549, came in the immediate aftermath of the Wall Street crash of 2008. And the film uses the headlines of that time to further lend it substance. Against this backdrop, the threat of joblessness was a serious threat for Sully. However his unarguable skill and decisive action, which saved the lives of the 155 people on the flight, ensured that his career and reputation were safe — and more, that he was a hero.