In the West today, there exists such a climate of fear and threat from Muslims, that it has become the norm for them to be defined as alien — ‘the Other’. This has been fuelled by the belligerent rhetoric of Britain’s Brexit and Trump’s election campaign and continuing atrocities committed by ‘Islamists’ in the name of faith. The result is that ordinary Muslims are likely to find themselves regarded as objects of suspicion for the most innocuous actions. All this belongs to the large trajectory of issues confronting Muslims in the West today that highlights the importance of Dr. Akbar S. Ahmed’s documentary, Journey into Europe. The film sets out to investigate and challenge the widespread perception in the West, of Muslims as people unable, unaware and unready, to accept a European world (and by extension America, Australia and other countries defined by European culture).

One of the most interesting aspects of the film is the way it engages with people of different faiths, opinions, professions and countries and juxtaposes their interviews with a narrative both historical and contemporary. Ahmed points out that the links between Europe and the Muslim world date back many centuries. He and his team begin their journey in Spain, the land which the Arabs conquered in 711 CE and which they called al-Andalus. The first part celebrates the rich, symbiotic, Euro-Arab of al-Andalus and its convivencia — the commingling of Muslims, Christians and Jews. This example of religious and ethnic tolerance in the distant past is perceived by Ahmed and the distinguished Rabbi, Lord Jonathan Sacks, as a precedent which needs to be emulated in the troubled and fractious present.

There are spectacular images of Cordoba which was the richest city in Europe by the 10th century CE. Ahmed visits the the magnificent Great Mosque of Cordoba (a cathedral today) where he offered prayers, as did Iqbal, almost a century ago. A copy of Iqbal’s famous Urdu poem Masjid-e-Qurtaba, in stunning calligraphy, hangs prominently in the office of Cordoba’s mayor. 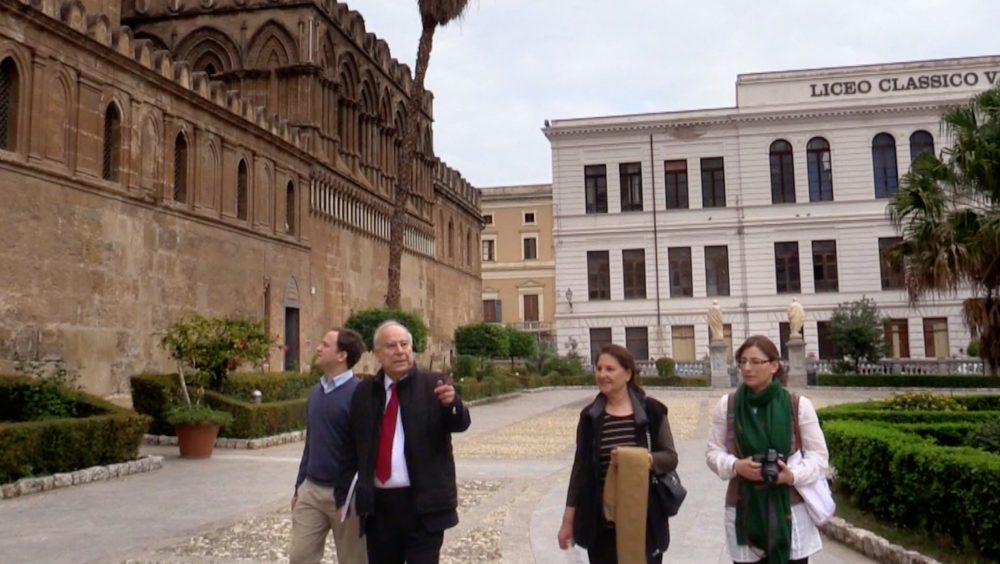 The film highlights the contribution of the Cordoba-born philosophers Averroes (Ibn Rushd) and Maimonides (Moshe ben Maimon) to modern European and Jewish thought. The intellectual achievements of Andalusian Arabs in science, mathematics and medicine, their translations of ancient Greek and Roman texts, and the knowledge which they then imparted to Europe, are all discussed here; as is the fact that modern Jewish poetry and music owes much to the Andalusia-Arab influence. The importance that Arab culture enjoyed in mediaeval Europe also emerges in Ahmed’s visit to Sicily. The island was once ruled by Arabs but the Norman Kings who replaced them in the eleventh century held their Arab subjects in high regard. Roger II and Frederick II both spoke Arabic and wore Arab dress. The architecture of Palermo Cathedral, Monreale Cathedral and the Palatine Chapel reflect this Norman-Arab synthesis; buildings, interiors and embroidered robes with Arabic calligraphy, geometric patterns and designs were the norm. To this day, long after the demise of that culture, Sicilian food and Sicilian words reveal that Arab inheritance. Ahmed also looks at the living legacy of Andalus today, although in 1492, the Fall of Granada (the last Muslim Kingdom in al-Andalus), led to the expulsion of Moors and Jews from Christian Spain. He hones in on the exquisite Arab architecture of the Alhambra Palace and the Arabic influence on Spanish music and dance, such as the flamenco: we also learn that the word “Ole!” comes from the Arabic “W’allah.”

The recent influx of refugees in Sicily and the post 9/11 hostility faced by the small number of European Muslims in Granada represent tropes that run through the film. In Granada, however, the Muslims do succeed through concerted collective efforts, such as community service, to integrate and allay opposition to a mosque — Granada’s first since the fifteenth century. However, as Professor Nassir Khalili of the Maimonides Interfaith Foundation points out, modern Europe has been a very intolerant continent and the Holocaust is but an aspect of that. 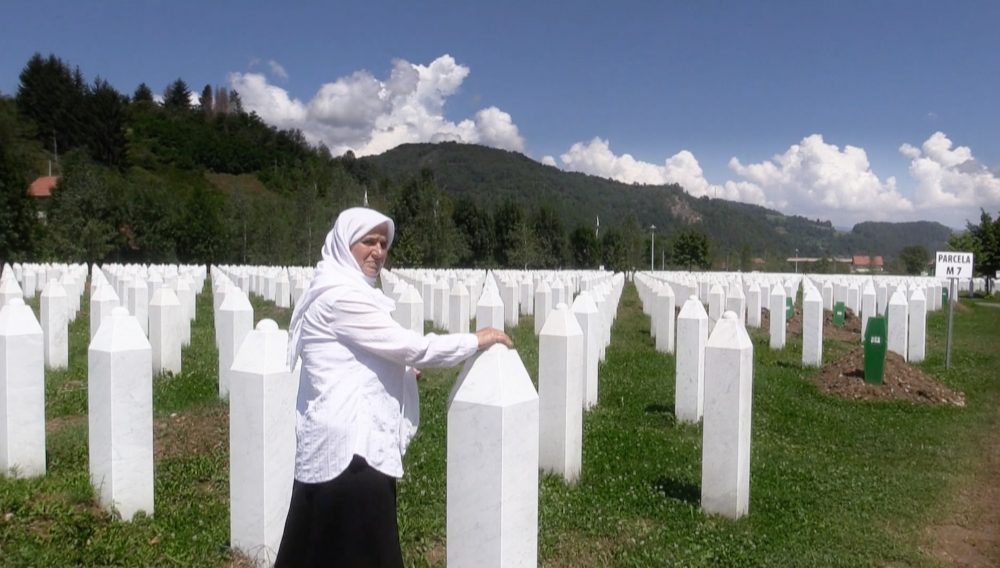 The conflict and genocide in Bosnia Herzegovina is central to the film’s second section. Bosnia, once a part of the Ottoman Empire, is a country in Europe, but it is also Muslim. Haris Silajdzic, the former Prime Minister, asserts that both aspects are integral to his sense of self and to Bosnia’s history. His own DNA can be traced to the earliest European tribes, the Illyrians in 2000 BC. He is very critical of Europeans who claim that Islam has no place in the continent. As the Grand Mufti of Bosnia says, “To be a Muslim here does not eradicate a European identity. We are European in our own way.” Ahmed looks at the country’s rich heritage, including Ottoman influences, in Mostar’s architecture, discusses the Ottoman Sultan’s Ahadnama (proclamation) guaranteeing freedom of religion to his subjects; and interviews members of the Jewish community which has been well integrated in Bosnian society ever since many of their forbears migrated from sixteenth century Spain.

The horrific Bosnian War of 1992-1996 and Bosnia’s struggle for independence, following the collapse of Yugoslavia, is fresh public memory. Ahmed comments that while the UN looked on, the Serbs carried out an ethnic cleansing and slaughtered Muslims in great number. In the graveyard at Srebrenica, white tombstones stand, row upon row upon row. This powerful image is juxtaposed with those of the bereaved, such as Haditza Mehmedovic, who lost her husband, brothers and sons in that genocide. The sheer horror of this and the memories of those who survived the siege of Sarajevo are heightened by footage of war and fire, guns and destruction.

The film criticises European leaders, who indulge in an anti-Muslim rhetoric. In Thrace, a small Muslim community has existed since the Ottomans. Today it finds itself subjected to threats and acts of vandalism. The Muslims are regarded as outsiders and newly arrived immigrants. These issues and the European hostility to the arrival of many refugees emerge in several conversations throughout Ahmed’s journey across Europe. The film’s final section links the post-war unravelling of Empire with the influx of immigrants into Europe from its erstwhile colonies. Ahmed points out that the largest empires were those of Britain and France. After World War II, many South Asians migrated to Britain and North Africans to France. All they wanted to do was to work and find a better life. They found themselves defined by name, race and religion. 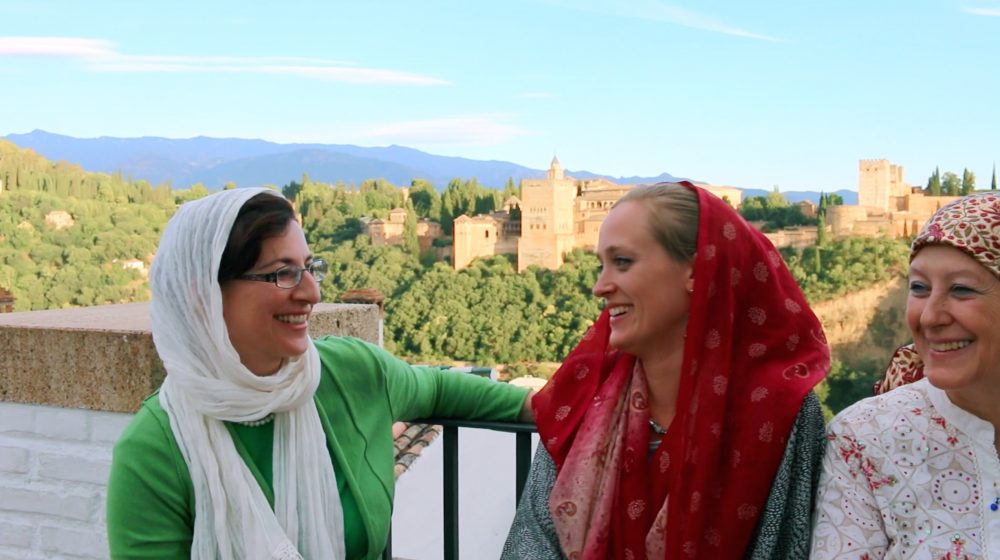 The film provides a biting critique of colonial rule. My only quibble is that greater emphasis could have been given to the eagerness of Britain and France to recruit and import cheap labour from their one-time empires for post-war reconstruction. After World War II, Marseilles saw the arrival of one million Muslims from North Africa; today over 30 per cent of its population is Muslim. The reverberations of 9/11 and the terror attacks in France, including the Charlie Hebdo affair, are all discussed here, as is the racist right wing rhetoric of Le Pen and other politicians and the crisis over women wearing hijab. This discourse also raises a particularly important issue: the sense of dislocation experienced by the younger generation and their failure to integrate. It is pointed out that what they urgently need is a national narrative which includes them, but the fact remains that Muslim history is not taught in France. This, in turn, makes young Muslims feel they have no place in the country and it leaves them open to ideologies which give them a stronger sense of belonging. This applies equally to the second or third generation children of immigrants growing up in other European countries, including Britain.

Ahmed talks to a number of British Muslims from different walks of life, including well-integrated, successful men such as Mohsin Akhtar who came to Britain with 10 pounds in his pocket and is now a very prosperous landowner. The politician, Humza Yousaf, Minister for Europe and International Development, points out that many early immigrants to Britain were well thought of because they opened shops, which provided both employment and a service to the community. There are discussions with the imams of British mosques, many of whom find that growing British animosity has reached “intolerable” levels. Ahmed’s daughter, Dr. Amineh Hoti, interviews women from different walks of life, including those who wear hijab and those who do not, and she illuminates the issues and the attitudes they encounter.

Journey into Europe essentially points to a new identity for Muslims in Europe as European Muslims; and it focuses on the vast majority, which does not espouse extremist views. The rise of political parties such as UKIP and Britain First and continuing anti-Muslim sentiment is the subject of several interviews. Dr Rowan Williams, the former Archbishop of Canterbury, urged a much greater interaction with the Muslim community, instead of “panic reactions.” The film travels onwards to Belgium, Denmark, Germany and Holland. There, Ahmed continues to examine matters related to politics, history, culture, race and religion and also that burning issue: Muslim refugees, welcomed in Germany but not elsewhere.

The film is being developed into the fourth book of Ahmed’s quartet, exploring the relationship between the Islamic World and the West and which includes the award-winning Journey into America (2010) and The Thistle and the Drone   (2013). The co-producers include Dr. Peter Morey, who co-authored with Dr. Amina Yaqin, Framing Muslims: Stereotyping and Representation after 9/11 (2011).