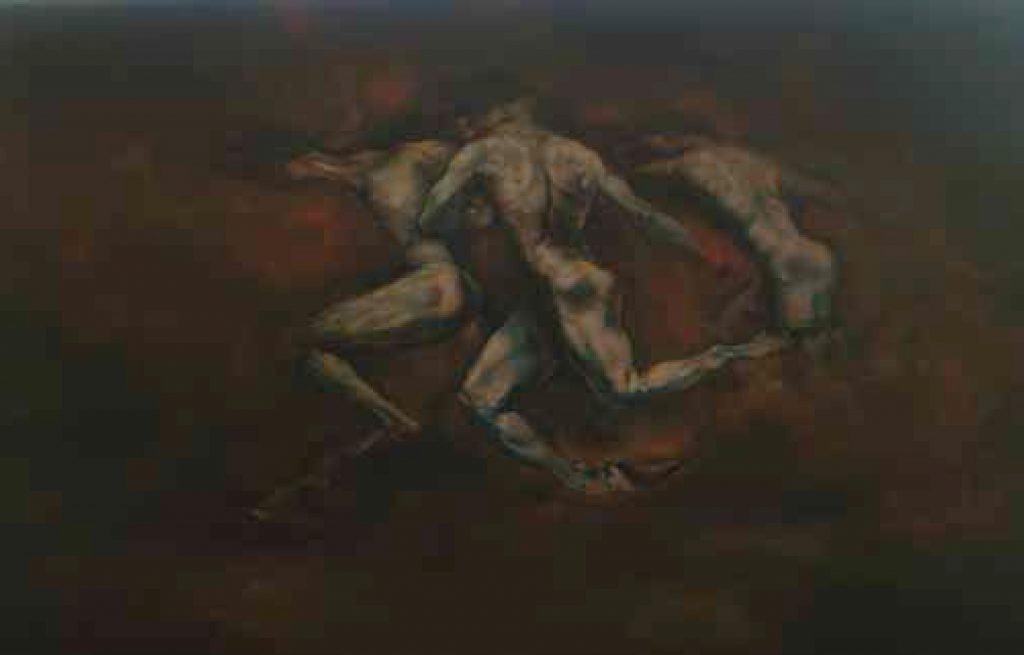 A recent show at Sanat Gallery featured two talented artists who use dark tones to create works with drama and understated psychological mystery. Titled ‘Tableau Vivant,’ the show was curated by Aasim Akhtar. It showcased sculpture and oil paintings by Jibran Shahid, and charcoal, pencil and pen drawings by Usman Khalid. 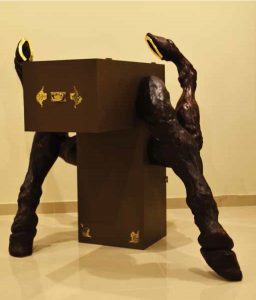 Jibran has a painterly style while Usman emphasises line. The two artists engage primarily in figurative expression which is an outcome of imagination rather than outer reality. The figures they depict tend to be placed in the centre of the picture plane. Form is emphasised by contouring, and is brought forward against a typically uncluttered and indeterminate background. Neither artist elaborates on specifics of time and place. The thematic outlook is universal rather than particular.

Jibran Shahid’s work depicts mergers of the human and equine form. The body is always bipedal with human arms and torsos, but the head and often the legs, have been replaced by those of horses. The powerfully muscled bodies of these chimerical figures have a primal quality and they seduce by their physical beauty rather than by emotional engagement.

The edges of the bodies are softened with feathery strokes. The strength of the musculature is emphasised with highlights and shading in the manner of Renaissance painters, who have been studied in depth by Jibran. The realism is imprecise. In ‘The Bachelor’ a figure with a horse’s head crouches in the sprinter’s starting position. There is a thick band of grey that runs along the buttock and leg which contradicts the frontal light that falls on the figure. This contributes to stylisation rather than realism.

Three figures in ‘The Blind Race’ have elongated limbs that melt into the background. The focal point is not emphasised and the space is ambiguous, giving the painting a rather Mannerist feel. The very dark chiaroscuro is typical of the tenebrism favoured by Caravaggio, an artist whose work is greatly admired by Jibran.

The show includes Jibran’s sculpture titled ‘Out of the Box.’ This modernist piece leaves behind the echoes of the Renaissance style found in his paintings and approaches the surrealism of early twentieth century art. Two deep wooden drawers are placed one on top of the other. Each drawer has a pair of horse’s legs extending from it. The act of lovemaking, while hidden from view, is implicit in the sculpture. One cannot help draw comparisons to Dali’s ‘The Anthropomorphic Cabinet’ (1936). 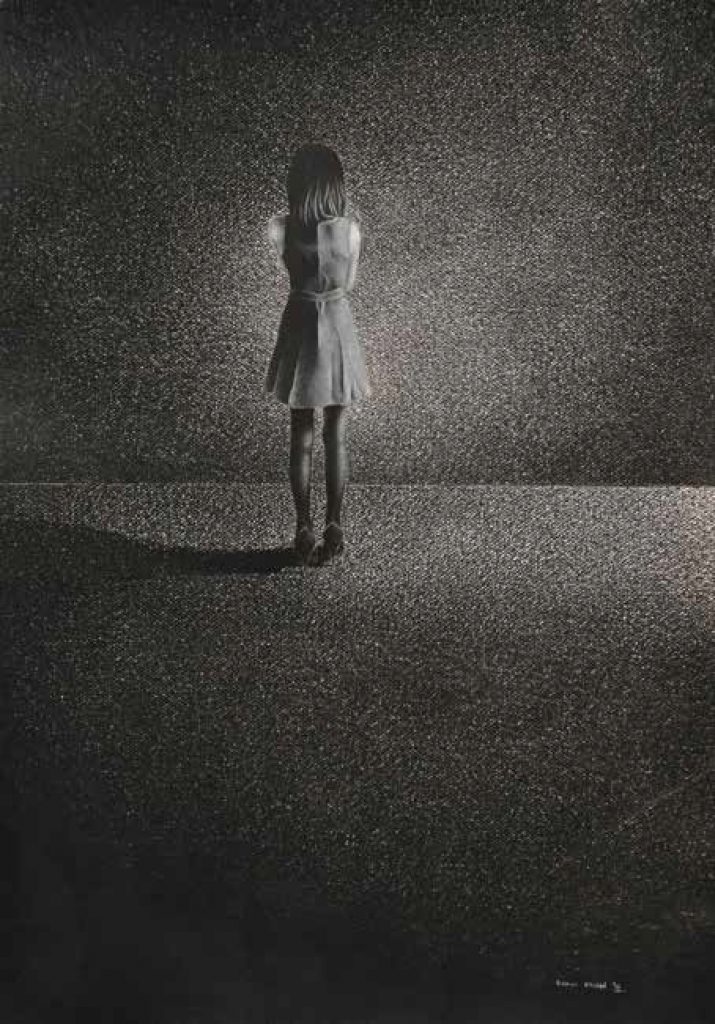 Dali was influenced by Freud’s ideas on the subconscious mind as was the cultural movement that emerged as Surrealism in the 1920s. The Surrealists sought to express an inner vision of free-flowing thought that could not be explained on rational grounds. Often their visualisations required entering a dream-like state from which autonomous images would “float” to the conscious level.

Usman Khalid engages in a somewhat similar process in order to achieve his expression. He derives inspiration by listening to music. Music becomes the portal that allows him to enter a dreamlike state from which he sees visions. His drawing titled ‘Contentment’ contains undulating lines and was inspired by a view of Rakaposhi. It is easy to see a correspondence with melody in this work. His other drawings are figurative and architectural, therefore more formalised.

Solitary figures are immaculately rendered in monochromatic shades of grey. Their contours are defined by shading and highlighted by directional light. They are surrounded with space but paradoxically, the feeling is one of enclosure rather than openness. In the two works titled ‘Talk to Me’ and ‘Talk to me II [Charcoal & Pastel on Wasli]’, a youthful girl and a man are shown respectively. They have their back to the viewer and they face a wall. The crease line between the floor and the wall is the clue that they are in an enclosed space.

Other drawings depict incomplete bodies which seem to have portions sliced away. The result is a more object-like figure that resembles a still life. ‘Worship’ shows the naked torso of a woman from the back, seated on a table which is draped with a cloth. Her back has been slashed diagonally and her torso resembles a ceramic vase with a sloped mouth.

Usman Khalid juxtaposes the geometry of straight lines with figurative work. In ‘The Descent’ a bare-chested man in jeans leans backwards atop a very tall and narrow four-sided column. His torso has been cut at the chest and the upper part of his body is missing. The effect is disorienting because of the inherent instability conveyed by the incomplete figure that balances on top of the column.

These quasi-metaphysical drawings have an enigmatic quality which they share with Jibran’s paintings of hybrid creatures. The artist in a surrealist frame of mind relies on an inner discourse where strangeness becomes the familiar. The works exhibited in Tableau Vivant move beyond the bustle of the outer world into the mysterious undercurrents of the human psyche.