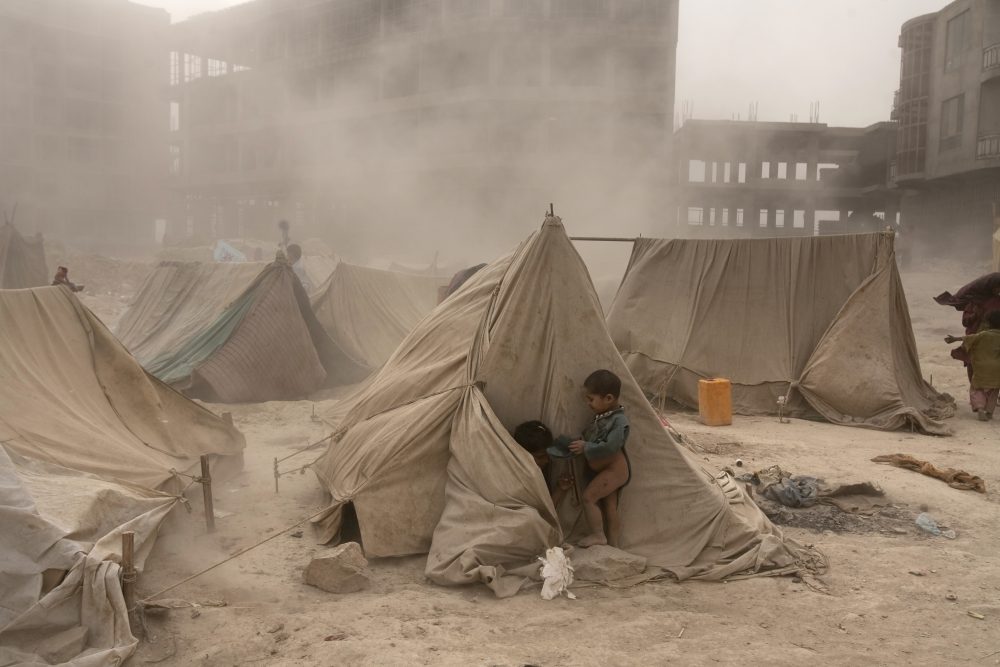 The federal government has decided to extend the deadline for the Afghan refugees’ stay in Pakistan from December 2016 to the end of March 2017. But the next six months still seem inadequate for the repatriation of the nearly three million documented and undocumented Afghans living in different parts of the country to their war-battered homeland.

According to the United Nations High Commission for Refugees (UNHCR), on an average 5,000 Afghans are voluntarily returning to Kabul, Nangrahar, Kunar, Baghlan, Kunduz, Laghman and other provinces of Afghanistan on a daily basis.

Qaiser Khan Afridi, the UNHCR spokesperson for Pakistan, maintains that the total number of returnees in the current year is 145,988 individuals, or approximately 26,000 families. “The UNHCR has recently opened a new repatriation centre at Azakhel in the Nowshera district of Khyber Pakhtunkhwa (KP), in addition to the one in Chamkani near Peshawar, to facilitate the growing number of Afghans who have decided to return to Afghanistan,” he adds.

According to the UNHCR’s analysis, introduction of tight border management at Torkham, doubling of the UNHCR’s repatriation assistance from USD 200 to USD 400 per returnee, extension of proof of registration (PoR) cards for short periods of time resulting in uncertainty and anxiety and a strong appeal by President Ashraf Ghani for refugees to return home are major factors. In addition, the pro-active Voluntary Repatriation campaign by the current Afghan Ambassador in Pakistan, the pressure exerted on undocumented Afghan refugees and even on the PoR card-holders by some government entities, particularly in KP, and the implementation of the National Action Plan, are the other factors behind the decision of the refugees to return to Afghanistan.

A sharp increase in the repatriation figures has been noticed since July this year. Earlier, on June 1, Pakistan introduced new, tighter border management controls at the Torkham official crossing-point between the two countries. Besides denying entry to Afghan nationals without valid passports and visas, a security gate that had been removed for the construction of the Pakistan-funded Torkham-Jalalabad road some years ago, was re-installed at the border.

However, the opposition of the Afghan border forces to the installation of the gate fuelled tension and led to a stand-off, as Pakistani security posts were fired upon on the night of June 12. Three security personnel, including a Pakistan Army major, Jawad Ali Changezi, and two Afghan Army soldiers lost their lives, and a number of soldiers and civilians, on both sides, sustained injuries.

Subsequently, Afghan refugees living in Khyber Pakhtunkhwa (KP) and other provinces started facing harassment at the hands of law-enforcing agencies. The KP Police came down hard on the refugees living illegally in Pakistan by arresting thousands under section 14 of the Foreigners Act in the so-called search-and-strike operations undertaken after the January 20, 2016 terrorist attack on the Bacha Khan University in Charsadda.

The KP Police records of July 26 show that 500 Afghans were deported in that month. A week later, more than 2,000 persons were sent back to Afghanistan. At the time, the Senior Superintendent of Police (SSP) Peshawar, Abbas Majeed Marwat, was quoted by the media as saying that “we have clear orders to deport those without proof of [possessing] registration cards.”

The 30-member Committee for Solving Problems of the Afghan Refugees — formed by refugee elders and comprising tribal elders, former politicians, warlords, religious leaders, intellectuals, businessmen, students representatives and a representative from each refugee camp in KP — believes that the number of Afghans detained was close to 9,000 persons. “Most were released after interrogation, but about 2,200 refugees are still behind bars. These innocent persons, who have not violated any Pakistani law, spent Eidul Azha in prison and they deserve to be reunited with their families at the earliest,” says Sardar Sherzad, spokesperson of the committee.

Fortunately, the attitude of the police towards the refugees certainly changed after they received instructions from Pakistan Tehreek-e-Insaf (PTI) Chairman, Imran Khan. “Hardly any arrest of the refugees was reported after Eidul Azha. It looks like the Foreigners Act has been set aside for now,” says Sherzad.

However, some Afghan refugees continue to face problems. Among them are Afghan students, who are enrolled in Pakistani educational institutions. Khalid Amiri, president of the Afghan Students Federation at the University of Peshawar, says they are living in a state of fear and uncertainty. “We fear police harassment every day. Students are concerned that they could be rounded up inside their educational institutions, despite carrying student identity cards,” he complains.

Ali Muhammad, a university student, is worried about continuing his education after returning to Afghanistan. “Like most Afghan students, I was born here and am accustomed to the Pakistani education system. I wonder if we could get enrolled in Afghan universities and if the educational standards there would be as good as they are in Peshawar,” he says with concern. 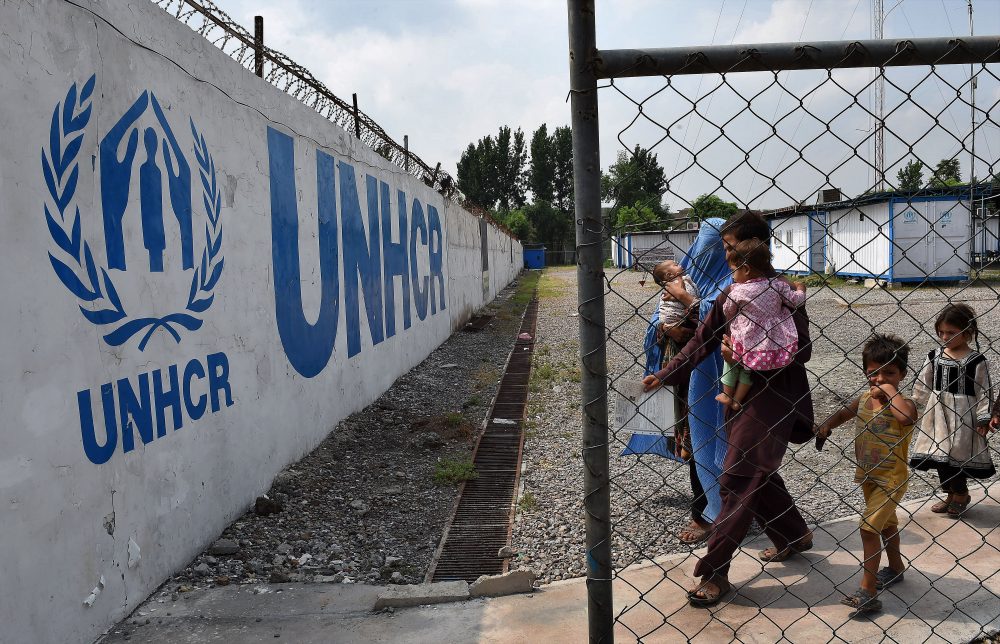 Meanwhile, the majority of Afghan businessmen are in a state of confusion as they fear they will be unable to withdraw their long-term investments, in personal and joint businesses with Pakistani counterparts, so swiftly. More than 8,000 out of the 12,000 shopkeepers in Hayatabad’s popular Karkhano market selling mostly foreign goods, are Afghans.

Rehmatullah, who repatriated to Kunar in August, had a cloth shop in Karkhano market.“I have a considerable amount of money stuck with Pakistani businessmen. I hope they will return my money in time, as I cannot chase after them while living in Afghanistan,” he says.

He also laments the lack of any commitment on the part of the Afghan government for the voluntary repatriates. “We have not received any assistance from the government. Promises they made have not been kept. Only the International Organisation for Migration (IOM) is helping refugees by providing household items,” he adds.

Lately, another issue the Afghans are facing is the denial of entry into Pakistan of all those without valid Afghan passports and visas for Pakistan. In one case, three family members of an Afghan refugee living in Peshawar had gone to receive him at Kabul’s Hamid Karzai International Airport upon his return from Saudi Arabia after performing Hajj. “The pilgrim has a valid Pakistani visa stamped on his Afghan passport, but his three family members don’t have the visa. Now they are stuck in Kabul and are trying to get a Pakistani visa,” a Peshawar-based Afghan refugee, Saeed Ahmadzai, informs Newsline.

During a recent visit to Torkham, I witnessed a Khassadar Force personnel beating up a middle-aged Hazara community member with a rubber pipe as he attempted to enter Pakistan. His wife and young son, who had succeeded in crossing over into Pakistan, watched in agony as the man repeatedly tried in vain to dodge the Khassadars.

Apparently, the family had travelled from Bamiyan province in central Afghanistan to get medical treatment for his sick wife and child. However, the man did not possess valid travel documents so he was being denied entry into Pakistan.

“The meeting with Imran Khan helped our cause. His swift instructions to the relevant officials helped in easing the situation for refugees,” says Arsala Kharote, a former mujahideen commander and member of the committee. 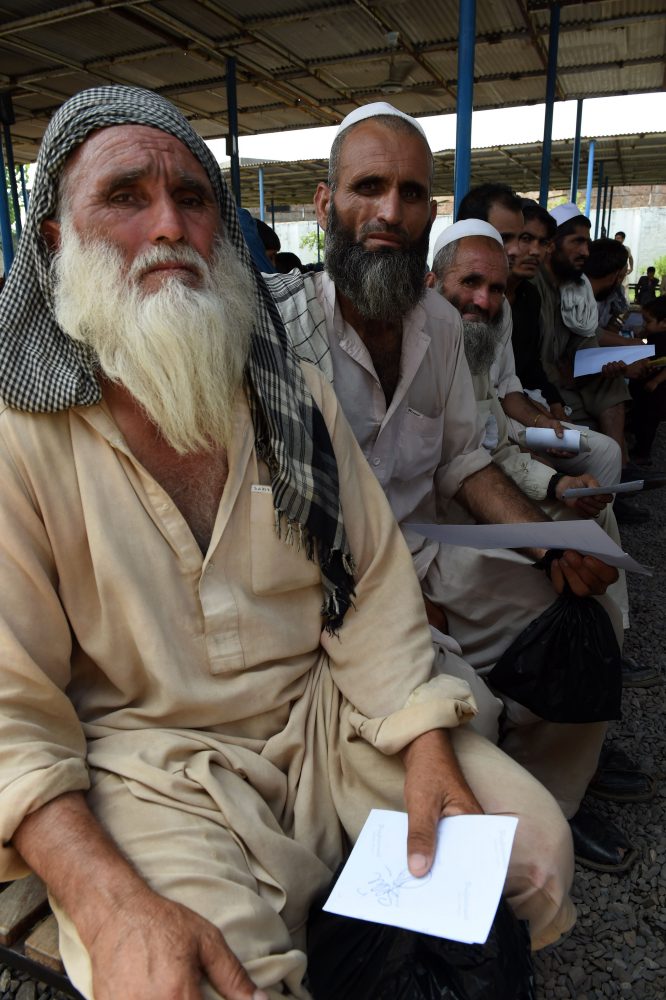 The committee spokesperson, Sardar Sherzad, argued that families, patients, children and elderly persons visiting Pakistan to meet family members or seek medical treatment should be allowed to enter without any restrictions. “Afghans are used to living in a joint set-up, where attending funerals, weddings and other family functions are a must for the whole family. Until peace is restored in Afghanistan, Afghans possessing any official identity should be allowed, even if they don’t have visas,” says Sherzad.

The committee is aiming to persuade Pakistani authorities to let Afghan refugees stay in Pakistan until peace is restored in Afghanistan or at least till the Afghan government comes up with concrete steps for resettling them, as most Afghans who return home are finding it hard to restart their lives from scratch in their war-ravaged homeland.

One issue that has not been given due attention, either by the Afghan refugees’ committee, or by the governments of Pakistan and Afghanistan, concerns Pakistani women who are married to Afghan men. Though some of them have migrated to Afghanistan, a number of them demand Pakistani nationality for their Afghan husbands and children.

Among them is Shameem, a mother of three children, who took part in a protest outside the Peshawar Press Club in the last week of September. “We have never been to Afghanistan. Many Afghan husbands have left their Pakistani families behind; others are hiding in homes and are unable to go out and work [for fear of being deported]. Our men and children should be given Pakistani nationality so that our children can have a better future,” she says.

Despite some clear push factors throughout 2016, UNHCR’s Qaiser Khan Afridi maintains that the return process was largely voluntary. “Continuous efforts by the concerned parties are required to ensure that registered refugees are able to exercise the voluntary choice between returning in safety and dignity to Afghanistan and having unhindered access to continued protection in Pakistan,” he maintains.