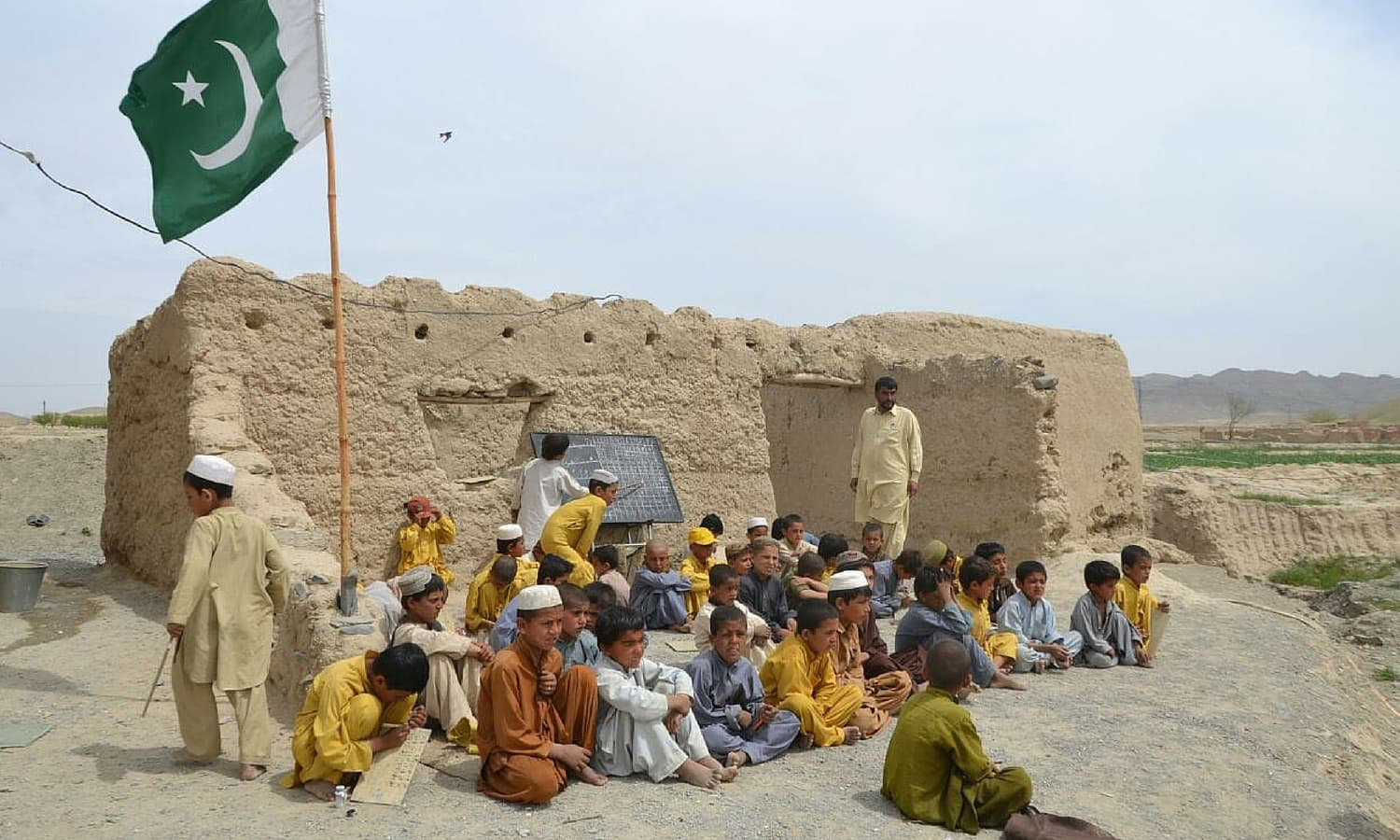 The New Yorker satirist Andy Borowitz said, “Stopping Trump is a short-term solution. The long-term solution — and it will be more difficult — is fixing the educational system that has created so many people ignorant enough to vote for Trump.”

Depressingly, the situation in Pakistan is equally scary but the difference is that in the US, to a significant extent, it can be ascribed to a steady desensitisation of one’s refined sensibilities, the result of the narrowing down of liberal arts syllabi and what is aptly termed as ‘The Closing of the American Mind’ (1987). Incidentally, it is also the title of a famous book in which philosopher Allan Bloom describes how higher education has failed democracy “and impoverished the souls of today’s students.”

In Sindh, the problem is at the gut rather than at the cerebral level, if one considers the physiology of educational diseases. Countless numbers of Sindhis are unable to read well, write, do simple math or even think academically as a result of seven decades of closed, ghost or poorly functioning schools. A case in point is a recent documentary out of Badin that showed science teachers who do not know something as basic as the formula for water.

The intriguing paradox about semi-literate Sindhis, however, is their knowledge and deep appreciation of local and world politics, as well as classical and modern Sindhi poetry. Nevertheless, the systemic issue of our extremely defective public education system needs to be addressed urgently for obvious reasons: the security and health of the people.

The influences on a large influx of already stunted Sindhi children into madrassahs that ‘teach’ by rote (and feed deficient diets) is only one of the many under-reported problems that afflict the cause of education in Sindh. What is more alarming is the growing phenomenon of public servants who are throwing up their hands in despair (in public), as if hostage to an overwhelming situation.

A recent policy dialogue of the Reform Support Unit (RSU) held at Shaheed Zulfikar Ali Bhutto Institute of Science and Technlogy (SZABIST), Kaarachi, to discuss access to basic education and development revealed what seemed like genuine frustration and despair among education leaders in Sindh. The RSU’s job is ‘…to streamline the existing edifice of Sindh’s education system delivery and provide policy inputs for advancement of education growth in terms of governance, access and quality education.’ 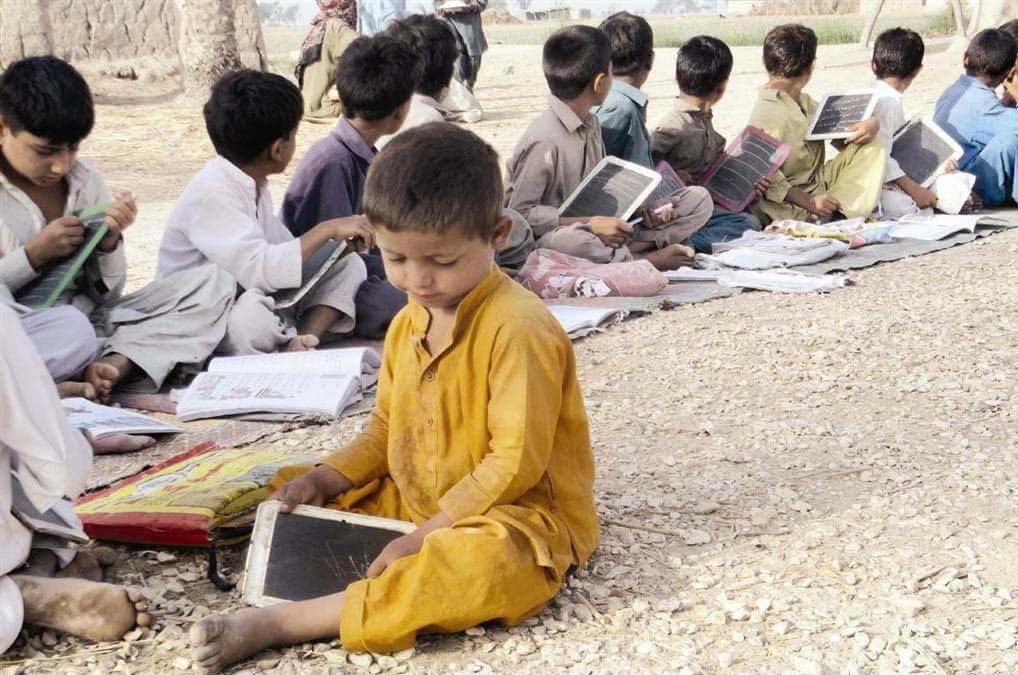 The panelists stated their priorities for Sindh’s education system in terms of ‘access,’ ‘quality,’ and ‘relevance.’ Dr. Ishrat Hussain, former director of the IBA, chose ‘access:’ “We ought to stop paying lip service and get under the problem. Unless we devolve education from the provincial to the district level…we will always have problems of the disadvantaged and the backward. How can a teacher who lives in Thatta be expected to work well in Jacobabad? Capacity is created by doing things yourself! Capacity-building, monitoring and supervision — all need to be done at the local level. There are 80 districts in Pakistan where there is inequitable distribution of resources. Why do we keep on perpetuating this vicious cycle? We don’t want to tackle tough issues. We often have the same diagnosis year after year…and a formulistic approach to education.”

Dr. Hussain recalled a time when he had to figure out how to get science teachers to go to Loralai district. There were five science teachers in Quetta and he suggested that they be given higher salaries to get them to go teach in district Loralai. Unfortunately, the Balochistan Teachers Union revolted against the idea.

Dr. Azra Pechuho, Chancellor of SZABIST and MNA Nawabshah/Benazirabad, disagreed with Dr. Hussain. “The basic thing is quality not quantity. We ought to concentrate on quality education. Children, who are unable to read or do math, are simply moved from the fifth to the sixth class. Schools are not bothered about teaching children. They just push them up for board exams. Everyone knows that the system has been corrupted.”

A choice between access and quality always sounds like an educational Sophie’s Choice. And the chancellor’s choice pointed toward problems of quality within the ‘existing edifice’ of Sindh’s education system which the RSU is mandated to empower. She elaborated candidly: “We lack the infrastructure…we have 80 students to a class!…although 15,000 teachers have received in-service training from Musharraf’s time to now…they made no difference because there was no monitoring. A little monitoring goes a long way.”

Describing the state of affairs in her own district, Dr. Azra Pechuho said that teachers were uninterested in their own education and only cared about their TA (Travel Allowance) and DA (Daily Allowance). “The DOs (District Officers) always send the same teachers and the DEOs (District Education Officers) are unable to even think of reform. They cannot do data collection….we have inducted people who are not able to teach…not only are they untrained, they are uneducated. I cannot sit with my district officer and talk about education. My district was unable to collect data of existing staff. But now the biometrics are finally updated and teachers are being hauled up for explanations. Children are being registered. Documentation is as important as minimum literacy.”

When Hussain insisted that access to education for 100 per cent of the population is a precursor to success, Pechuho said we cannot wait to achieve universal access before we start to work on quality. They could both be asked why, after nearly 70 years, the issue of Pakistani children’s education has to be a choice between access and quality. 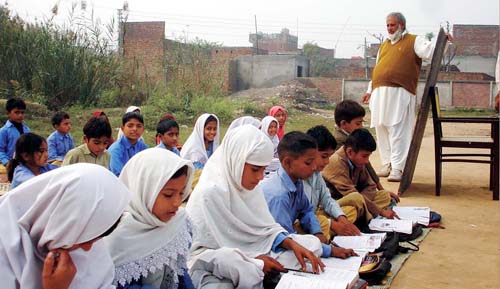 He also points towards the issue of federal vacancies in Sindh’s education system. He reiterated, as have so many educationists in Sindh, that the federation is not effective and the concept is violated when the federal share is violated. “Why is the issue of Sindh’s share [in the education budget] not discussed in the Council of Common Interests?”

Dr. Fazlullah Pechuho said that he is in charge of 27,000 one-and two-room schools throughout Sindh but he has no idea of how many children are enrolled in them. “Ninety-nine per cent of Sindh’s children do not have a bay form. If a person earns 1,500 rupees and the form costs Rs. 500, how can he afford it? NADRA is a government within a government. Why don’t they give our children free cards?

“We have replaced supervisors with monitoring assistants; teachers training is going on and we are monitoring attendance.” But Dr. Fazlullah Pechuho continues, “the majority of the teachers are trained over three to five days, when they need six months to a year of training. The Sindh government does not have the necessary human resources. I have 100,000 primary teachers, of which 80 per cent are un-trainable. They don’t attend school for even an hour. Private schools pay Rs. 15,000 to Rs. 20,000 to a teacher. Government school teachers get Rs. 50,000 but they still don’t teach! We are stuck with these teachers — at least till I retire.

“Our work is truly difficult,” he says. “For example, no one wants to work in the 50-degree temperatures of Jacobabad. Incentives don’t work. We need a social contract. Islamabad just makes policies but how does one incentivise teachers to improvement?”

The secretary expresses his outrage explicitly: “How does one capture absentee teachers? The absconders? The rooposh? There were 15,000 last month. How does one encounter this menace? Everyone is responsible and everyone must share the blame.”

Has Sindh’s education system broken down? Or perhaps it was never constructed according to our needs. Perhaps British Sindh’s famed education system (that worked brilliantly to serve minds like that of the 100-year-old Ibrahim Joyo) had a restricted shelf life; it expired before Partition. What we have now is a skeleton that is barely recognisable due to mediocre syllabi and administrative ineptitude.

Successive governments seem to ‘adjust’ to the bad template in place, in the education system in Sindh with its uncommitted/untrained/un-trainable teachers and poor infrastructure. But no one considers scrapping and redesigning the system as an option. Attempting to reform Sindh’s education system would be like trying to turn an ocean liner around in turbulent seas.

Systems, in themselves, don’t deliver unless enriched with relevant content. And if Trump wins the elections, then the United States would have finally paid the ultimate price for allowing “the closing of the American mind,” as Bloom predicted.