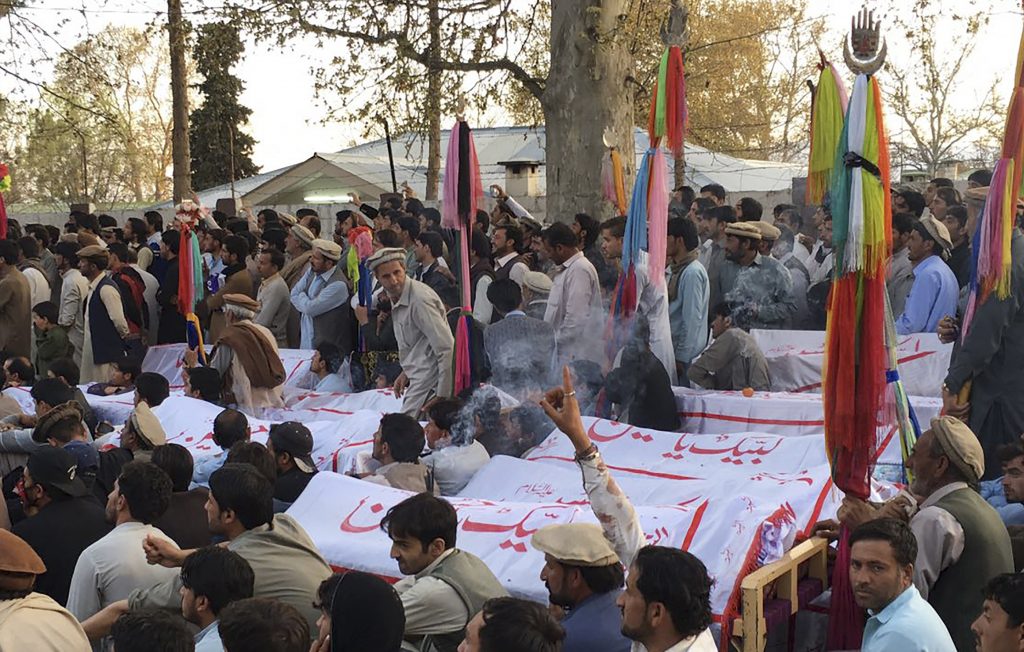 On Eid day, many families in terror-hit Parachinar, the capital of Kurram Agency and a predominantly Shia area in the tribal belt, were buying shrouds to bury their loved ones, and candles and incense to place on their graves. A grief-stricken woman wailed, “I had just stitched new clothes for my brother on Eid,” while another, at the grave of her 12-year-old child, cried, “Your mother will remember your wounds till her last breath.”

While the casualties of the June 23 terror assault were upwards of 70, the town’s total death toll from terror attacks went up to 115. Numerous terror incidents have taken place in Parachinar in the last decade and numerous families have at least one, if not two members in the grave. The Shias of Parachinar have suffered a greater loss of life in terror attacks this year than anyone else in any city in Pakistan.

The latest twin explosions were the third terrorist hit that Parachinar witnessed in 2017. In January, at least 24 people were killed in a bombing claimed by the banned Lashkar-i-Jhangvi al-Alami and a faction of the outlawed Tehreek-i-Taliban Pakistan (TTP). In March, another attack in a market took the lives of 22 civilians. The Jamaatul Ahrar took responsibility for that strike.

Residents of Parachinar protested with a seven day sit-in over what they believed was indifference on the part of the government towards their security. Conspiracy theories started doing the rounds on social media. They alleged that elements within the security establishment, in particular the Frontier Corps, that had sectarian inclinations, were responsible for the deliberate lack of security at Parachinar. “We have been a regular target of the Taliban, but the government has always failed us,” Muzammil Hussain, a Shia activist from Parachinar told the media. After the first two attacks, check-posts and barriers were erected around the town’s markets. “How can someone drive a bomb-loaded vehicle through all the check-posts of troops and reach here?” he continued. “This is what we are protesting against.” The Shia community suspected the complicity of anti-Shia elements within the security establishment in targeting them.

As anger raged regarding the lack of concern shown by the authorities and mainstream media on the plight of Parachinar, and social media activists raised questions about the alleged sectarian nature of the response, the Pakistan Army called for a unified response to what it described as a “malicious” campaign by hostile intelligence agencies and anti-state elements, who were aiming to give the recent violence a sectarian and ethnic tilt. The Inter-Services Public Relations (ISPR) department insisted that the army chief had interacted with the religious clergy of all sects over the last few days, to seek their involvement in defeating the “campaign” to create sectarian tension.

There was an intense sense of alienation among the residents of Parachinar, who felt they had been abandoned by the rest of the country. They complained that the national media did not cover terrorist attacks in their town the way it covered them in the rest of the country. They argued that the government was least bothered about the plight of victims in this far-flung town of the tribal belt. Prime Minister Nawaz Sharif visited Bahawalpur and immediately announced compensation for the victims of the oil tanker blast, but he ignored Parachinar.

“The silence and negligence of our leaders in the face of this tragedy, is of criminal proportions,” says Riaz Ali Toori, a resident of Parachinar. “I want to know why I am being treated as a non-citizen of this country. Where is the outcry in the media over the mass killing of people in my area?” People had to transport dead bodies and the injured in handcarts, because the town has few ambulances. Many of the wounded would have been saved had the town had adequate provision of medical facilities.

In the aftermath of the assault, no high-level meeting was held to discuss the situation in Parachinar and no political representative attended the funerals of the victims. TV stations were showing Eid-related programmes without dedicating any time to the bereaved families who had gathered outside the offices of the Political Agent in Kurram Agency, protesting against the insensitivity of the authorities.

Six days after the bombing, when the protest prolonged and started spreading to other cities of the country, Prime Minister Nawaz Sharif announced compensation of Rs. 1 million and Rs. 0.5 million for each family of the victims of the twin bombings and for each person injured in the blasts, respectively. However, protesting tribal elders rejected the offered compensation for not being at par with the amount of Rs. 2 million given to the victims of the oil tanker tragedy. The protesters demanded a visit from the Chief of Army Staff General Qamar Javed Bajwa and Interior Minister Chaudhry Nisar Ali.

Finally, on June 30, the COAS visited the families of the victims of the twin blasts and also met with some tribal elders in Parachinar. The eight-day protest was called off after General Bajwa met the protesters’ main demand and ordered the removal of Colonel Omar, the Frontier Corps Commandant in Parachinar. Army jawans raised slogans of “Labaik Ya Hussain” along with the crowd, to mollify the protesters and affirm their solidarity with them.

The army quite sensibly moved to defuse the anger and agitation of Shias in Parachinar, but the situation is likely to remain volatile in the days to come, as some of them are alleged to have connections with Iran. Many Shias from the region are said to have gone to Iraq and Syria to fight IS in the larger sectarian battle raging in the Middle East. It is believed that IS and its affiliates in Pakistan and Afghanistan have targeted Parachinar in retaliation, thrice this year.

The concerns of the Parachinar community cannot be brushed aside as enemy propaganda attempting to divide the country along sectarian lines. Instead, the army leadership needs to take sound measures which would inspire confidence among the community and provide them better security. n