No one doubts that Pakistan’s universities are unfree, bigoted and often violent. Local newspapers have carried many stories of young killers, including several from affluent middle-class families. University graduates have planned and executed murders as well as gruesome massacres, such as those at Safoora Goth and the Parade Lane mosque. Islamic groups such as Daesh and Hizb-ut-Tahrir successfully recruit young fanatics.

Punjab University, where the Islami Jamiat-i-Talaba (IJT) has dominated student politics for over 50 years, must top the list of the world’s most fearsome educational institutions. Anti-vice squads prowl the campus hoping to smash the head of the guy holding his girlfriend’s hand or engaged in other such ‘immoral’ acts. In past years, they have forced the closure of the music department, ended dance and life drawing classes, and used torture tactics, such as holding a lit cigarette to the genitals of a captured opponent. Many murders have been ascribed to this group, but it remains firmly entrenched in power.

Intolerance extends to other ethnicities. Being at Quaid-e-Azam University (QAU) in Islamabad since 1973, has given me a grandstand view of multiple such incidents. The most recent was last month’s violent clash between Baloch and Sindhi students, leading to serious injuries and the university’s closure for several days. Sensationalist, ratings-hungry TV channels broadcast the battle blow by blow. Recorded on his smartphone by a student with a strong Punjabi accent, he can be heard squealing in delight every time a Sindhi student falls to the ground or a Baloch receives a lathi blow on his head. Only his expletives are filtered out.

A few days later, at QAU’s popular eatery, I chanced upon separately meeting some of the Sindhi and Baloch students involved in the clash. What I learned was no more than what I had known forever — petty squabbles explode like bombs where minds are immature, youthful testosterone flows freely, and students move in wolf packs.

But the most horrific recent example of campus bigotry came this April from Abdul Wali Khan University in Mardan. Mashal Khan, a smart and energetic 23-year-old left-leaning student enrolled in the journalism department, already knew he lived in a deeply conservative, tribal environment. But still he could never have imagined that he’d end up beaten to death by his fellow students on charges of posting blasphemous content on his Facebook page. His Pathan roommate was among the 57 students who stripped him naked and thrashed him with sticks and bricks until one student pulled out his pistol and shot him dead. Another 400 students gladly watched the spectacle, made videos of the event, and posted them on Facebook.

When I travelled to Swabi to meet Mashal’s grieving father, Iqbal Lala — a vendor of potato chips and biscuits — he was emphatic that the blasphemy charges against his son were utterly spurious. Indeed, the Supreme Court of Pakistan, because of the national attention this incident had received, had constituted a 15-member Joint Investigation Team (JIT) and 13 of those investigators ruled that the blasphemy charges were unfounded. 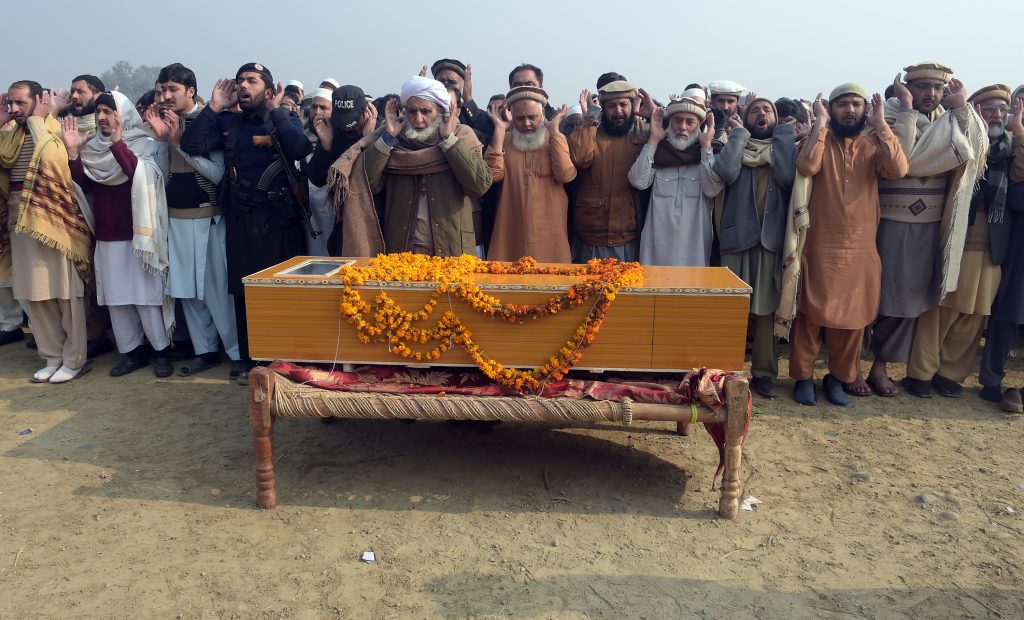 Mashal’s murder, said Lala, was engineered by the university administration. As a student activist, Mashal had become privy to information that could expose them. Indeed, the JIT inquiry revealed that of 330 security guards hired by the university, 220 were actually working as domestic help in the homes of powerful people. This includes leaders of the Awami National Party (ANP) — once considered a left-wing party. The administration’s earlier plan to murder Mashal one week earlier and throw his body in the river hadn’t worked out, said Lala, and so blasphemy charges were invented. In conservative Khyber-Pakhtunkhwa (KP), it appears that people don’t ask for proof. Simply levelling the charge is enough for a mob to go berserk.

Pakistan’s universities are different from others across the world in countless ways, one of these being how seriously they take studies. Over my 44 years at QAU, I think the university must have closed down 20-30 times for a week or more. In 1997 it had completely shut down for an entire semester because teachers were demanding a part of the university’s land to be handed over to them as their private property. Compare QAU’s working record with that of the University of Paris, which, ever since opening its doors to students in 1160, has closed only thrice — in 1229 (the University of Paris Strike), 1940 (German invasion), and 1968 (student agitations). The University of Oxford, established in 1096, has temporarily closed only twice, once in 1209 due to the town execution of two scholars and in 1355 during a riot.

Intolerance and bigotry on Pakistan’s campuses are symptoms of a deeper malaise — authoritarianism, disrespect for knowledge and disdain for free thought and inquiry. According to a majority of university vice-chancellors, deans, heads of departments, and senior and junior professors, politics has no place on campus and Zia-ul-Haq did well to ban student unions, which should remain banned forever. Academic freedom is a malicious western invention for corrupting minds, wasting time, and destroying discipline. Coeducation is a bad idea that brings immorality onto the campus and should be banned or, at the very least, a strict dress code applied. That there is no department of comparative religions at any Pakistani university is perfectly okay, because we have the best possible religion. Studying music is ridiculous, and Islam probably forbids it anyway.

Criticism of authority is forbidden. To get this message through, in early June, the University of Faisalabad expelled three students on the grounds that their Facebook pages were critical of the university administration. The students alleged that the administration had created an environment of nepotism, corruption, and mismanagement. One does not know if these allegations were correct, but elsewhere they would be investigated, not suppressed.
It is forbidden to discuss any major issue in class. This includes the nature of religious belief, any aspect of the blasphemy law, anything considered critical of the Pakistan Army and its commercial operations or its past wars with India. The mention of Balochistan’s problems is strictly taboo and watched by spooks. A frank analysis of nuclear weapon policy or the China Pakistan Economic Corridor (CPEC) is impermissible. Science too, is censored — try advertising a campus seminar on human evolution, or aspects of human sexuality, and be prepared for what will follow! On the other hand, preachers are frequent invitees to discussions on topics such as djinns and black magic.
Policing is not always done by the university administration or intelligence agents — students are often willing volunteers. This is unsurprising. Most grew up in an authoritarian environment and were never exposed to genuine debate. Consequently, few students attain intellectual or emotional maturity during their time in university. In fact, university teachers invariably refer to their students, who are mostly in the 22-28 year age bracket, as “bachas” (kids). Surprisingly, students also self-refer as such. My students continue to do so in spite of my admonitions!
In these intellectually asphyxiated institutions, there is often form without substance. Graduation mortarboards and gowns may look impressive, but the real question is: how much have students learnt during their stint at university? Teachers appear to teach, but in fact only repeat what’s in the book or the notes, research is mostly about producing look-alike fakeries, and the only permitted form of student organisations are ethnic councils. Student unions, which once provided a forum for discussing political and social issues, have been banned for nearly 40 years.
The modern university was Europe’s most important invention, one that made possible the transition from medievalism to modernity. Even in the darkest of times, and often under the gaze of a frowning church, these ivory towers pursued free and unfettered inquiry. Traditions of empirical analysis and critical thought have been crucial to the creation of dynamic societies.

That historical lesson remains unappreciated in Pakistan. The major obstacle to building modern universities is the country’s authoritarian culture. In common with other Muslim countries, there is suspicion of western educational values and an insistence on looking back at the past. Unfortunately, there is nothing in Islamic history that would help shape a university that’s fit for today’s times — the only model is that of madrassas. Although the madrassa curriculum, developed in 1067 AD by a Seljuk vizier known as Nizam-ul-Mulk, had a smattering of secular subjects, its basic purpose has always been religious learning.
Pakistan is yet to decide whether it actually wants universities that can also act as society’s conscience, or instead pursue disciplined military style colleges where knowledge has an immediate functional use and conformity is a virtue. I have never seen any argued discussion of this critical choice but I presume that, at least at the unspoken level, the latter is considered desirable and the former considered dangerous.
Universities are but a microcosm of society at large. Intolerance on our campuses will disappear only if the rest of society moves towards valuing the intrinsic equality of men and women from all races and religions, abandons the notion of Muslim supremacy, and agrees that political and civil liberties are inviolable rights.