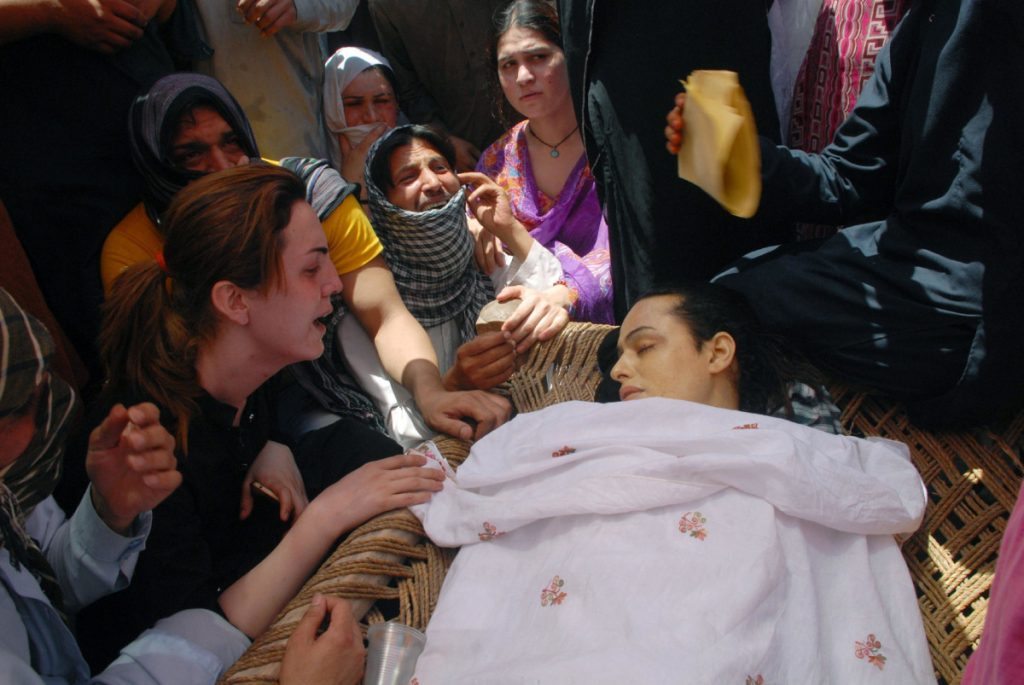 Pakistani transgenders mourn the death of their colleague Alisha in Peshawar.

Shot eight times by a disgruntled lover, transgender Alisha was brought to Lady Reading Hospital in Peshawar — one of the biggest medical establishments in Khyber Pakhtunkhwa (KP) — in critical condition. But here, she faced another dilemma: the staff on duty could not decide whether to admit her in the men’s ward or the women’s. What’s more, patients from both wards refused to allow her to be admitted to either. Three days later, Alisha succumbed to her injuries. Her death, in May 2016, sparked nationwide protests and, for the first time in the country’s history, the transgender community was given coverage by the mainstream media in Pakistan.

An active member and network admin of Trans Action Alliance, a KP-based advocacy group that uses Facebook as a platform to protest transphobic violence, Alisha boldly led the campaign against transphobia — both in online and offline spaces. She was the second admin of the Facebook page to have been attacked. In January 2016, Adnan, her colleague and co-admin of Trans Action Alliance, received three bullets in her lower abdomen, narrowly surviving the fate Alisha met later in May.

Qamar Naseem, a member of Trans Action Alliance and a project coordinator of the rights organisation, Blue Veins, believes both revealed their identities online, thus leading to their deaths. 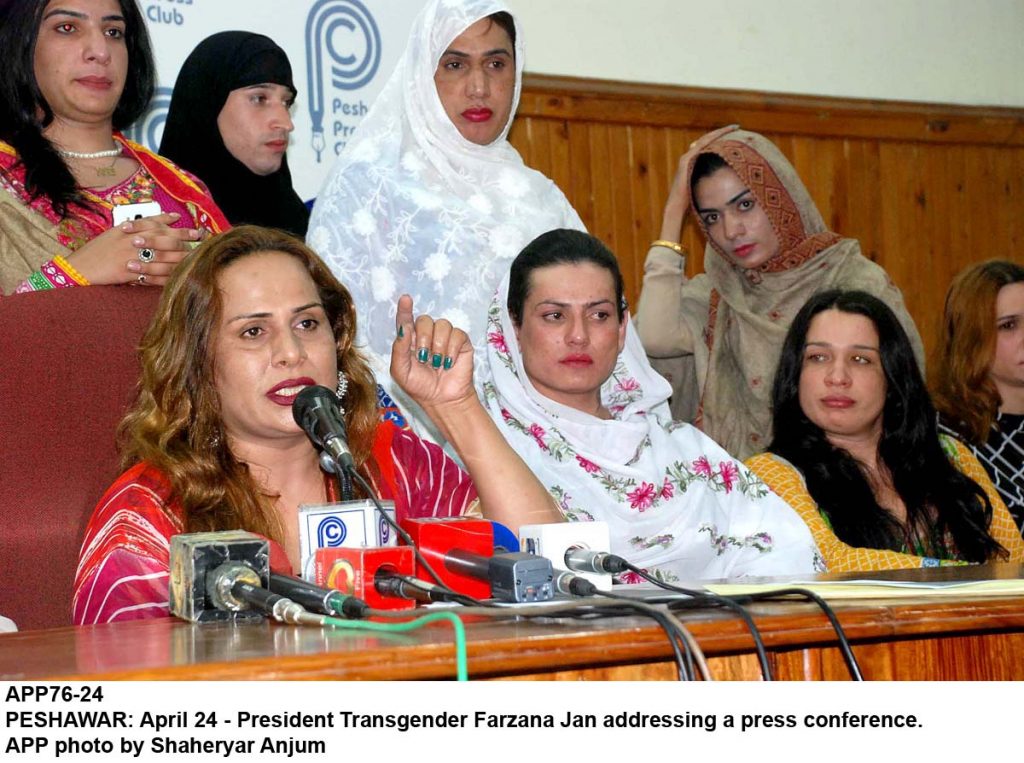 The Facebook page of Trans Action Alliance was created in 2015, following a meeting of their eight-member board. “Transgender issues were rarely highlighted in the media and there was no interaction of the transgender community with the outside world; so we decided to create a Facebook platform,” Qamar Naseem recalls. “Initially, our objective was to create awareness about the issues faced by the transgender community, break the stereotypes related to the community, and increase the interaction between the general public and the trans community.”

Naseem and other board members didn’t expect their social media presence to take off in such a big way, ultimately leading to nationwide media coverage of transgender issues and legislative moves to provide relief to the community.

Now 47,000-members strong, Trans Action Alliance has a global outreach, with over 23,000 members from the transgender and intersex communities. The Alliance, which was initially limited to KP, has now turned into a national movement. Following a successful campaign for their rights, the KP government decided to allocate PKR 200 million for the welfare of the transgender community in their 2016 annual budget. Additionally, KP’s Chief Minister, Pervez Khattak, announced a Transgender Protection Committee to formulate the first-ever Transgender Protection Policy, in the wake of the growing violence against the community.

Trans Action Alliance’s reach was evident in March this year, when Senator Farhatullah Babar moved a privilege motion against the Advisor to the Prime Minister on Foreign Affairs, Sartaj Aziz, for “concealing the truth” regarding the death of a Pakistani transgender in Saudi Arabia in the Senate. Aziz had earlier claimed that she died of a heart attack and was living illegally in Saudi Arabia. However, the Trans Action Alliance consistently made the point, through social media, that she had a valid Saudi visa and was clubbed to death.

Trans Action Alliance has an effective reporting system that enables transgender persons from far-flung areas to reach out to the public. Every district in KP has a coordinator, often a guru, who is in constant touch with her disciples (transgender dancers and sex workers) across the city. Any incident of violence is quickly reported to the guru, who takes pictures of the victim and shares them with the board members. The board members, who are also the admins of the Facebook page, instantly share the pictures along with details on the page. The same pictures are also sent to a WhatsApp group, comprising police officers, rights activists, government officials and journalists. In the matter of an hour, it becomes national news, and you have people from all over the country responding to the incident. 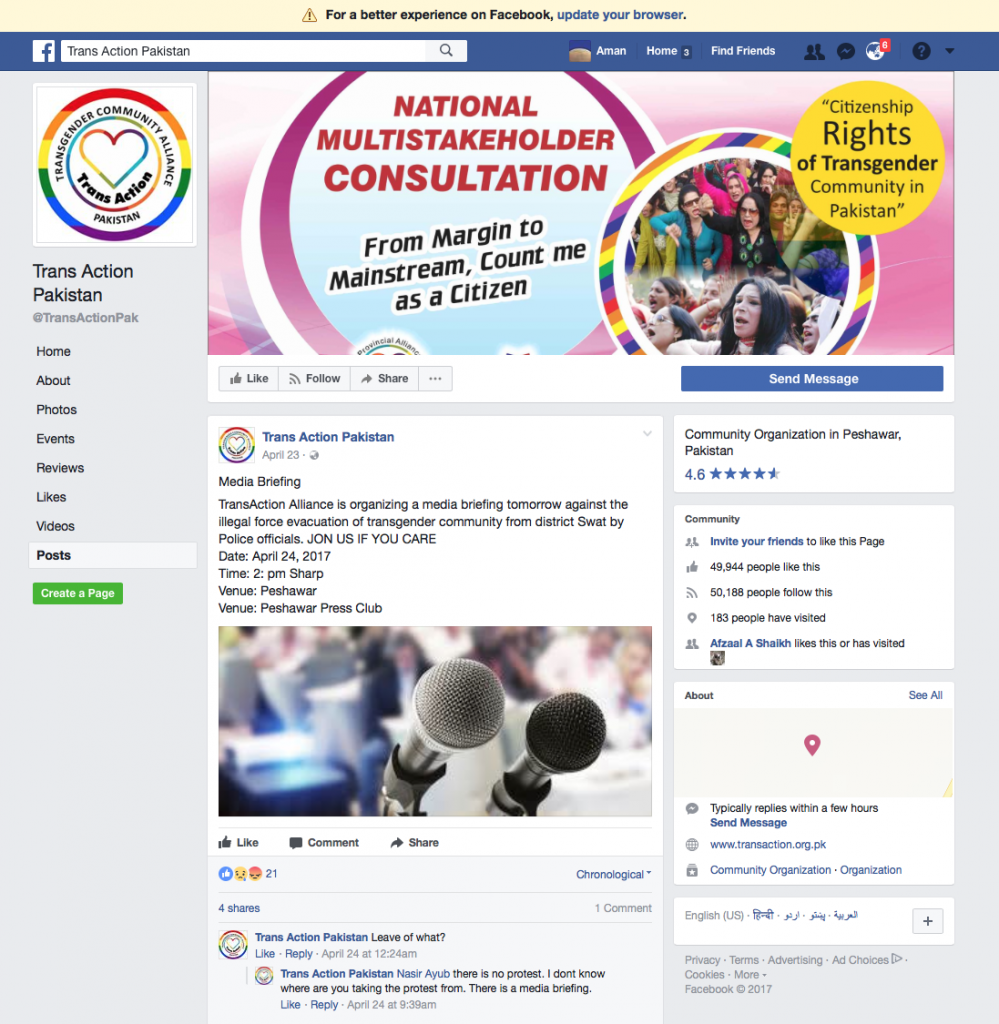 Farzana Jan, head of Trans Action Alliance, believes using the social media as a tool to protest against injustices was a revolutionary idea. “I have been working for the rights of my community since 2005, but we rarely got heard by the powers-that-be,” she says, adding, “However, only two years after the creation of our Facebook page, we have achieved unbelievable success.”

Trans Action Alliance, which regularly uses the hashtag #TransLivesMatter is similar to the Black Lives Matter movement in the US, which also started off as a hashtag and later became a full-blown campaign for racial justice. Speaking at the Social Good Summit in 2016, activist Luvvie Ajayi said, “We’ve forced mainstream media to cover things that they’ve previously ignored, and things that they previously thought weren’t worth their time.” Something similar happened with the transgender community’s campaign for redressal of injustices in Pakistan.

Such is the power of social media.