Canadian thriller, Drone, is a brave but modest film that grapples with the contentious issue of the use of drones by the US in assorted third world countries, including Pakistan. Despite their reputation as tools of precision in modern warfare, drones have become extremely controversial in view of the innumerable deaths they have caused of innocent people caught in their firing line, and cast aside as “collateral damage.” 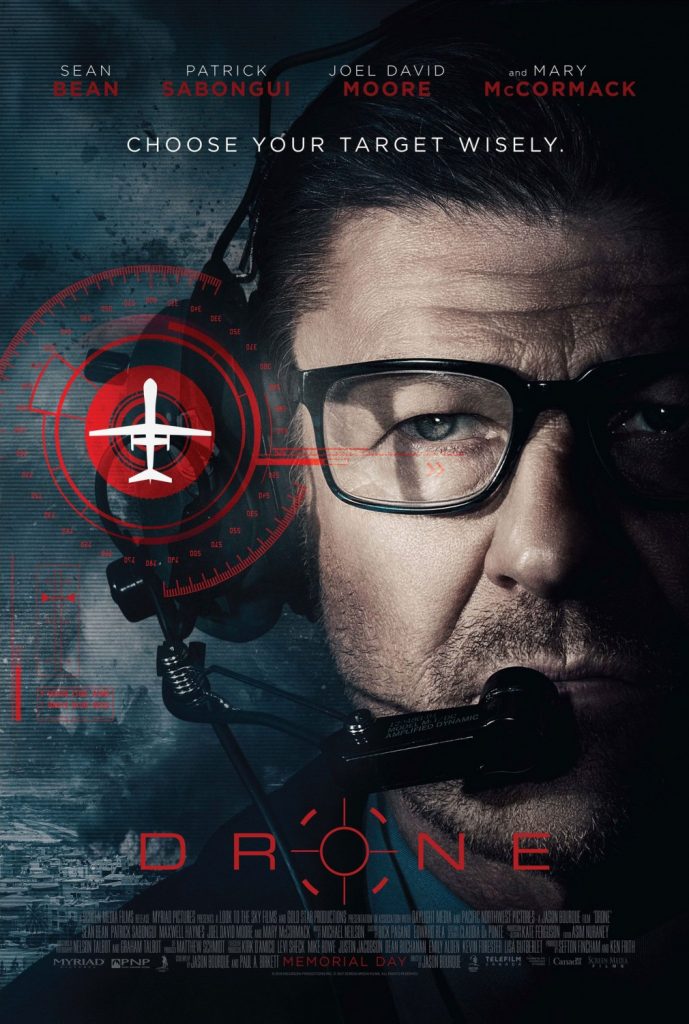 The opening aerial shot shows an UAV (Unmanned Aerial Vehicle) striking — literally like a bolt from the blue — a family man departing from home for work and two women walking the same route; all three are killed instantaneously.
In another scene, a couple of UAV pilots in suburban USA are flying a drone over Miranshah, the administrative headquarters of the Northern Waziristan Agency in Pakistan, from the safety and comfort of their war console. Having identified and locked onto their target, they fire a missile on a suspected terrorist, who is driving through the narrow streets of the town. The scene of the drone hitting its target, is particularly grizzly and unsettling. The terrorist survives the deadly strike and crawls out of the burning car, his body ablaze. And with a chilling indifference, both operators request their superiors to go in for a second strike and blow him to smithereens.

Sean Bean is cast as Neil Wistin, an American drone pilot under contract to fly covert missions for the CIA from his hometown. Unconcerned about the lives he is destroying as an armchair warrior, Neil is actually a family man with a comfortable lifestyle, residing in suburban Washington with his wife and son, who are completely oblivious of his clandestine workaday world. Juggling a double-life, Neil is presently contending with his father’s upcoming funeral and an emotionally disturbed son — and, unknown to him, a cheating wife.

But his life is about to change forever with the arrival of Imir Shah (Patrick Sabongui), an enigmatic Oxford-educated Pakistani IT professional, who shows an interest in buying Neil’s father’s beloved boat set up for sale outside their front yard. Completely taken with this potential buyer’s gentle, courteous demeanour, Neil invites him into his home and introduces him to the family. Imir takes a deep interest in them, but as the story unfolds, he reveals a grave sorrow he has been nursing due to a tragic incident in the family. The film then turns into a taut thriller with an ugly confrontation between two fathers.

Earlier films on drones have portrayed them as the perfect military tools to target and combat terrorists and their organisations in difficult terrains. However, this covert warfare being waged by remote control from the other side of the world by armchair warriors becomes the subject of a raging debate on the ethics of drone warfare in this film.

By shifting the focus on the ramifications of drone attacks, especially on the families of innocent victims, who are merely viewed as “collateral damage,” director Jason Bourque effectively turns the arguments in favour of those who are strongly opposed to drone attacks.