In the psychological drama, Black Butterfly — adapted from the French thriller, Papillon Noir — Paul Lopez (Antonio Banderas) is a congenial writer down on his luck, trying to sell his secluded homestead located on the edge of a chilly mountain. For the past few years, the fortunes he made as a bestselling novelist have dwindled, mainly because he is suffering from an acute case of writer’s block. His agent calls to warn him that his publishers were not too thrilled with his last manuscript. The only words Paul is able to churn out on his rickety typewriter are, ‘I am stuck,’ repeatedly. 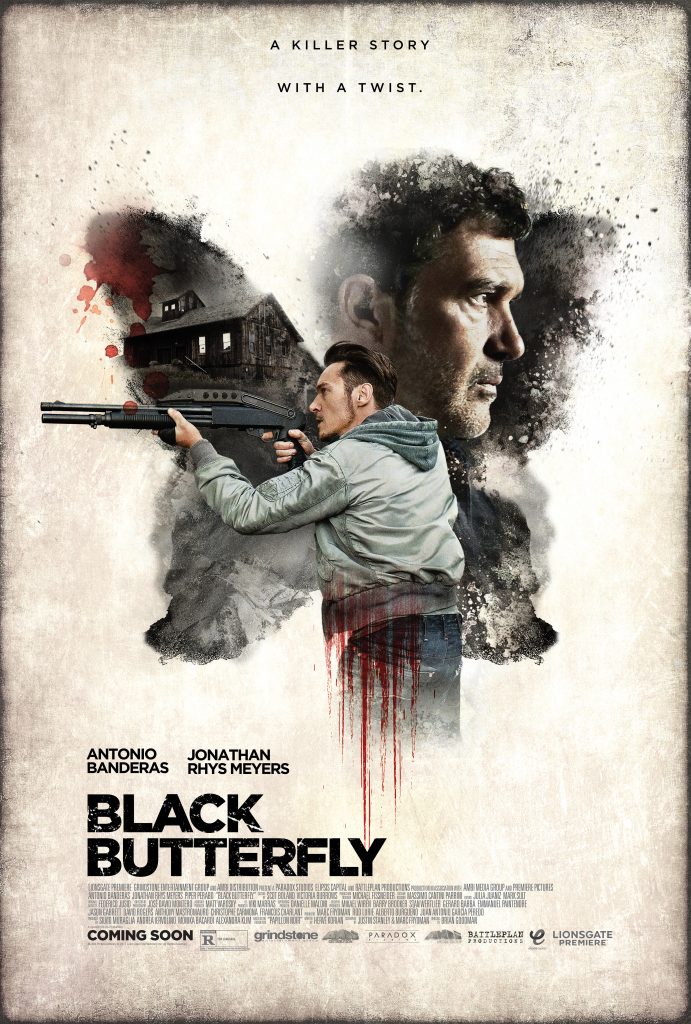 Meanwhile, around the same mountain town environs, news channels report the disappearance of a young mother from a picnic spot. She is the fourth woman to have gone missing in a series of abductions over the last few years. And the law enforcement personnel are nowhere near resolving the mystery of the murder of the last three women by an unseen predator they refer to as “the Roadside Killer.”

On his way to meet Laura (Piper Perabo), his attractive realtor in whom he has more than a passing interest, Paul narrowly escapes being hit by a speeding truck driver on the mountainous road. At the diner, Laura gives Paul a disappointing update on the sale of his property. And while she is telling him about the much-needed repairs on his estate, the obnoxious truck driver (played by the film’s director) returns to confront Paul. An almost violent altercation between the two is broken up by the arrival of a stranger (Jonathan Rhys Meyers), who physically tosses the driver out on the street and then departs.

Finding the same stranger walking along the road while driving back home, Paul offers him a ride. Grateful for his intervention at the diner, Paul invites him — a drifter named Jack — back to his remote mountain cabin to rest until an impending storm passes. Jack accepts and makes himself useful by cleaning up the house and even cooks a sumptuous meal. He turns out to be a good handyman as well and makes Paul a proposition of staying a few extra days in exchange for fixing up his property.

What appears to be earning his keep rapidly becomes an uneasy intrusion, as Jack muscles his way into Paul’s life, his work and his financial problems. He even pushes Paul to get back to his writing and stop taking alcohol, which he says is the cause of his writer’s block. Jack’s psychopathic nature is further revealed when he insists on giving Paul an idea for a story — and the plot moves  forward menacingly.

Perhaps not in the same class as Misery, the 1990’s hit psychological thriller that received numerous accolades including an Academy Award, the story falls into the same category — except in the Black Butterfly, the supposed predator is invited into the protagonist’s life. The screenplay has several unexpected twists, and even though the second half of the story seems implausible in places, the skillful performances by the cast and the adept direction by Brian Goodman more than makes up for the flaws.